The perpetrators of the failed Athena Project meant for its child subjects to be discarded and forgotten. Nine and Twelve’s plan wasn’t about revenge, but about making sure they and the others weren’t forgotten; that those still alive who were responsible were plucked from beneath the rocks they’d hidden under. With increasingly stunning yet nonlethal attacks, they gradually built up their stature, until no one would be able to forget what they did, and by extension, that they lived.

The most stunning yet is the high-altitude detonation of the stolen atomic bomb, which ended up not harming anyone but disabled all electronics in Japan. While it was yet another means of gaining attention and exposure among the masses, it also served as a firm counter-riposte to the efforts of the members of the Athena project to use technology to artificially enhance mankind. For at least a time, the EMP emitted from the bomb reverted the country to a far simpler state.

Shibazaki became the Oedipus to Nine and Twelve’s Sphinx, looking past easy answers to solve the riddles of where they came from, what they were doing, and why. They unwittingly helped him to solve the case that had ruined his career, and finally learn what those he suspected of wrongdoing were up to, and putting them away for it. Justice tastes a lot better when it is acknowledged not just by oneself or amongst a few individuals, but by the same system that once helped shelter the wrongdoers.

I will say that even in a series of a mere eleven episodes, Five’s arc was ultimately a bit of a detour, though as the only other surviving Athena subject, her actions tore Nine and Twelve apart, threatening the whole enterprise, only to bring them back together as strong as ever following her demise. She represented an alternate effect of Athena: that of unchecked chaos and rage. It’s also worth noting that after the end of the facility, she was and remained alone right up until her final confrontation with the others, while at least Nine and Twelve had each other, which had a grounding effect.

Even so, just before the bomb goes off, when Lisa isn’t sure whether the world is about to end, Twelve tells her he and Nine were never needed by anyone until they met her and everything changed. Neither were ever ones for true, honest human interaction, let alone feeling what it was like to care for someone so much that you’d do anything to save them, which Twelve got that with Lisa. Even if he and Nine didn’t (nor intended to) survive the gestation of the better world they sought to build, they didn’t take Lisa down with them.

On the contrary, through her adventures and their many rescues of her and acts of kindness towards her, Twelve and Nine instilled a fresh appreciation for life, and while many will ask her what it was like to be “Sphinx’s hostage” for all that time, she could never tell them much, because they’d never fully understand: she wan’t their hostage. She was their friend; their little sister whom they kept safe without fail. And they gave her hope.

Twelve deals with the guilt of betraying Nine, while trying to have fun with Lisa. Nine rolls the dice and surrenders to the police. Five makes one last desperate grasp at Nine, who “belongs to her.”

Shibazaki comes face to face with Shunzo Mamiya, who orchestrated the Athena Project and the investigation of whom led to his demotion. An atomic bomb is released into the sky, to go off at 10pm. This episode isn’t messing around, expertly setting up the endgame.

Interestingly, this episode is Five’s last. For those of you who tired of her relatively petty and nebulous vendetta and terrible English, rejoice, for she ends up doing herself in. Physically deteriorating, she senses the end is near, and after a harrowing chase and crossing the line with her American handlers, all that’s left to do on that highway is thank Nine for being the reason she stayed alive this long at all; to pursue him.

She has him in her sight, but doesn’t pull the trigger, knowing she’s been beaten. Instead, she gives Nine a chaste parting kiss and ignites the pool of gasoline she’s standing in. This explosion was brought to you by the number Five.

With Five now gone, all that’s left is for Nine to expose Athena to the world, if that was indeed his plan. The only problem is, the press conference he demanded the police allow him to hold is interrupted by Five’s meddling, and the atomic bomb is loosed, unable to be stopped by anyone.

While meeting with Shunzo, who was convinced the spirit of Japan was “that of a loser, without a shred of dignity”, and thus pushed forward with Athena, Shibazaki can fathom the scale of the backlash, which looks tenuously close to being realized.

In his final broadcast, transmitted automatically when Nine doesn’t get to the Hyatt at 8:00 PM, Sphinx One warns that nothing can stop the bomb. If he’s right, then we’re in for a catastrophe in the finale. But I’m not entirely convinced he’s not bluffing at this point. 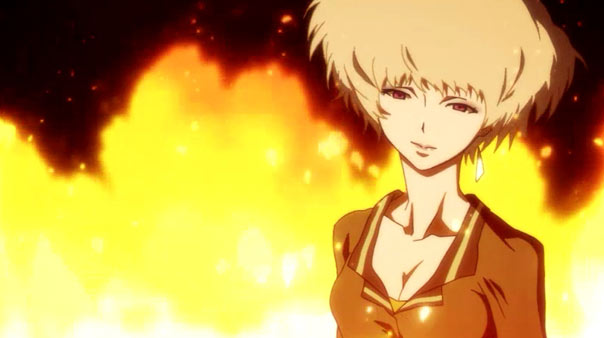 I’m not even sure his entire plan from the start was to draw out Five so that she could, well, finish herself off. Also, Twelve even ends up redeeming himself somewhat by interfering in Five’s pursuit of Nine, and I like how he does so on Lisa’s urging, telling him how happy she was when he saved her, and how Nine will probably feel the same way. Five may be gone, but there’s a lot left to sort out.