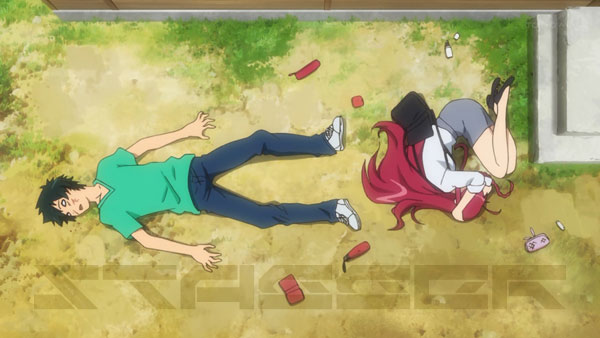 Maou’s new neighbor introduces herself as Kamazuki Suzuno and offers to cook him a meal. Emeralda sends Emi a package full of elixir disguised as vitamin drinks that will help restore her powers. While stalking Maou, Emi notices Suzuno in his apartment and investigates, and is eventually invited in. She warns Suzuno not to get too close to Maou. Maou has his first shift as supervisor, but Chiho is distraught when she sees the homemade bento Suzuno made him. Emi is attacked at a convenience store by an unknown assailant with the ability to nullify her sacred sword, but is saved by the clerk.

And then there were six. What started with just Maou and Ashiya transported to earth has now grown threefold with the addition of Urushihara and most recently Suzuno. While Urushihara started out as the bad guy and then became a web-surfing bum, Suzuno’s true motives remain elusive. She came from Ente Isla, but even Emi isn’t sure whether she’s a human or a demon, or what exactly she wants. All she knows is, she’s quickly inserted herself into Maou. Things take another turn for the suspicious when Emi is attacked not long after metting Suzuno, though her attacker was a guy.

While sweltering in the summer heat, Emi wonders if she’s looking at the Maou and Ashiya situation all wrong: maybe they really don’t mean any harm and simply want to live out their lives as law-abiding humans. Part of her wants that to be true, but she still can’t be sure. And even if she was, parties beyond her and Maou are inserting themselves into their lives, and aren’t going to let anyone have normal lives. They’ll attack without warning in conspicuous places, and they may come with kind greetings and homemade elaborate lunches. But the fact is, they’re all threats to the status quo that both Emi and Maou would rather simply enjoy indefinitely.

Maou’s general Lucifer, aided by rogue High Priest Olba Meyer, intends to destroy both Emi and Maou, using the negative energy of the surrounding populace – and Chiho – to fuel his magic. He gravely injures Maou, but he has enough magic to teleport to a crowded area, where he too draws power from the people and stops a highway from collapsing. Emi summons her hero powers and clashes with Lucifer. Once he sets the rubble down, Maou joins the fight, beating Olba and Lucifer to a pulp. Emi’s allies Emeralda and Albert arrive, and they’re confused about Maou, but take Emi’s word for it and then depart. Maou and Emi explain everything to Chiho, who watched it all unfold. Maou fixes the damage to the city and wipes the public’s memories (except for Chiho’s).

Not only was this the most action-packed episode, it was also the funniest by far, and those two qualities actually complemented each other quite well, rather than clashing. Maou in particular calls out Olba (“cue-ball”) on his cliche’d villain bullshit, and while he, Emi, Ashiya and Chiho are put into considerable peril, they come back hard on their would-be usurpers and put them back in their place. When you go after the Hero and Demon Overlord, you best not miss. They did, and struck out.

This was also one of the denser episodes not just of this series, but of the entire Spring, with an epic, cinematic feel and a lot of well-oiled moving parts humming along in perfect harmony and formidable speed. But in the midst of all the magic spectacle and comedy, the four core characters stay true to themselves throughout. Even while Maou’s keeping an overpass from falling on her, Emi is still reticent about working alongside him. Maou sticks to his guns about liking the world he’s in and working hard to protect it. Ashiya is a proud, loyal…dork. Best of all, Chiho remembers everything that happened this week, and she seems to be cool with it, which is what we’d expect of an open-minded, wide-eyed youth such as herself.

Maou and Emi look upon one another incredulously in the aftermath of all this action, after returning to their ordinary human forms. The question is raised: if the two of them could have summoned this power all along, why did neither of them try to off the other? Both are coy and elusive in their answer, but we can hazard a guess; while Maou still talks about restoring his empire and Emi muses about killing Maou, the fact is, it’s all just talk, and in the meantime, they seem to be enjoying their ordinary human lives…so why rock the boat?

Thanks to Maou, there are no casualties following the earthquake that caused the underground mall to cave it. Emi recalls how she was taken from her father to train to become the Hero, and how her village was destroyed and father killed by Maou’s general Lucifer. After spending time with Rika, the next morning she visits Maou to pay him back, and falls down the stairs. He helps her, and his kindness irks her, considering what he did in their world. Chiho walks in on the two of them together and misunderstands. Maou, Emi and Shiro chase her down, but she’s already been confronted by Lucifer, who wants to surpass Maou.

It must be something about the new world he finds himself in, but at the moment Maou is…just not acting all that evil. He rained death and destruction upon the world he comes from, earning the eternal hatred and loathing of all who survived his ruthless attacks. Emi, the daughter of an angel, has lived her entire life for one purpose; to face and defeat Maou. And now that they’re in a new world, nothing makes sense anymore. Maou is kind and heroic and cares for people, even Emi, and it’s driving her crazy. Being a hero is supposed to be her job, for one thing.

Her friend Rika also suffered in the past; having been in Kobe during the horrible great earthquake there. In Emi she finds someone she can embrace and talk to without being pitied as a victim or otherwise judged. In Rika, Emi finds someone else dealing with a lot of pain over tragic events of the past. She’s convinced she can never forgive Maou for what he’s done, but you can tell she’s struggling with her certainty.

Meanwhile, Maou inadvertently got the spunky Chiho tangled up in all these supernatural affairs, and his general Lucifer is in this new world to usurp his former lord. If anything can bring the bad old Maou out, it’s insubordination by an underling. And since they have a common enemy, Emi will likely put aside her reservations about continuing to interact with Maou rather than killing him in order to save innocent lives around them, including Chiho.

The day after Emi spends the night at Maou and Shiro’s, the guys are picked up by the cops when Maou’s bullet-ridden bike is found. After someone calls Emi at work threatening to kill both her and Maou, she goes to the cops to grudgingly sign off as their guanantor, and explains the situation. Chiho arranges a date with Maou in Shinjuku to discuss the earthquake, but Emi and Shiro tail them. Chiho tells Maou she’s heard voices and he realizes the other world is trying to contact him. A large earthquake strikes, ravaging the underground mall and trapping the four in rubble. Emi uses a spell to put Chiho to sleep after reassuring her, and Maou emerges in his true form, to attempt to free everyone.

We figured Chiho would get dragged deeper into this alternate world heroes-vs.-demons mess sooner or later, and she does this week, by hearing communiques in the aether intended for her ears, but which she can hear and understand nonetheless, likely do to her extended proximity to Maou. The title “Maou-sama goes on a Date” doesn’t do justice in an episode where a lot more goes on than a date. Both Yusa and Maou have a mutual enemy; he’s already taken shots at them. That means as much as Emi has been conditioned to loathe Maou and his general, a temporary alliance is in everyone’s best interests.

This is especially true if Emi wants to minimize harm to innocents, which she does, because she’s a hero. Here’s the thing: when it comes to Chiho, it would seem Maou’s a hero too. He’s talked of his return to glory once he regains his powers, but once he finally gets them back after the earthquake, his first thought is to help others, not further his own goals. Emi even considers pulling out her trump card to slay him in this opportune moment when they’re isolated, but doesn’t go through with it simply because, well, Maou just isn’t acting evil. In the other world, things were black-and-white, but here, so far, things are different.