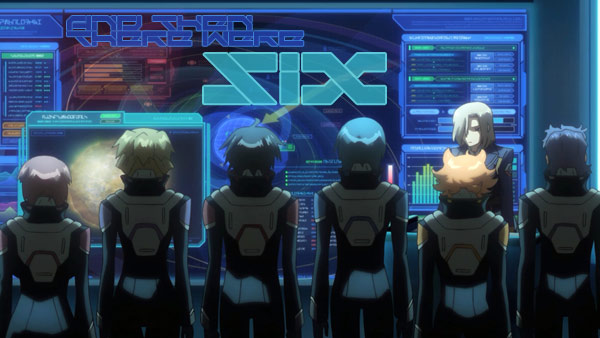 The ship Suruga was waiting for his entire day off turns out to be transporting a new AHSMB, Black 6, to be piloted by a new member of Team Rabbits, Ange Kuroki. While seemingly shy and submissive at first, after engaging in a mock battle with Izuru (which he wins handily) his personality totally changes; a slap from Kei and the soft-spoken Ange returns. The MJPs are deployed to 4 Vesta to defend the GDF base from a Wulgaru attack led by Klein. Ange ignores all orders and operates on his own, destroying Klein’s entire squadron, then Klein himself, all while displaying the highest harmonic levels ever seen.

Well, that’s one way to shake things up! With a new half-season comes a new character, the “aloof ace”, someone who isn’t concerned with hobbies, socializing with his teammates, or even listening to a damn word they say. Ange Kuroki…well, he gets Angery. Ahem…we mean angry. He totally schools Izuru, then looks down on him. His AHSMB is the most advanced unit, and he must be the product of some new training program that’s left him less functional as a complete human being than the others. He’s not fitting in, nor does he seem to want to. Sure, Ange disobeyed orders, broke formation and did whatever he wanted, but he got the job done, and the superiors only care about results.

With the possibility Ange ever becoming one of the team being remote when he and his AHSMB are so far ahead of the curve, you have to wonder why he isn’t just his own one-man team. He certainly makes the other Rabbits look bad; no one but Ange is able to save an ambused Kei, who let herself get surrounded, and Tamaki just blasted after the first bogey Kei saw: a decoy. Add a pinned Izuru and Asagi and an inaccurate Suruga, and the team looked pretty poor out there. Even so, we’ve seen what they’re capable of and know they’re better than this. It just seems like Ange served as a hair in their pickled fish guts. Unfortunately for them, it’s a hair they’ll have to live with.

Word spreads around the district that Tamako is a “princess”, but she’s more excited about winning a medal for filling 100 order cards throughout the years. Her dad is sour about the entire idea, and Mochizou isn’t altogether ecstatic either, especially, when Tamako gets to chat briefly with the prince via Dera. After Mochizou tells her if she’s happy, he’s happy, and Anko sleeps with her, Tamako wakes up to find the medal gone. In the street, it is handed to her by none other than the prince.

As one of the shopkeepers says to her dejected dad, Tamako is very good around the house and with the mochi shop. But that doesn’t mean that everything’s going to stay the same forever. Even if she herself doesn’t want to leave yet, one day she may. No one, not even Choi, knows exactly what the future holds. We certainly don’t, after an episode that’s all about how everyone reacts to the biggest change yet: Tamako moving away to marry some weird prince. And to be fair, no one – not her dad, Anko, Midori, Kanna, Shiori, or Mochizou, saw that coming.

Of course, a lot of smaller changes have already taken place in the course of the series: When Dera arrived, that was certainly change; but it didn’t really shake anything up, because he was the one sticking around, in a new life. For everyone else, it was the same old life. In fact, now that he’s a fixture of the household. But Tamako leaving? That’s a change that scares everyone close to her, and her most of all, especially because she doesn’t know exactly how she feels or should feel about this, and no one has satisfactory answers, because it’s her life.

RABUJOI apologies for the delay of this review.

The Usagiyama High Cultural Festival approches, and the Baton Club gets a primo spot in the schedule, when they’re assured the largest audience. Captain Midori designs the uniforms and volunteers to come up with the choreography. However, she can’t think of anything, and hides her creative block from the others. When she misses a day of school with a fever, Tamako, Kanna, and Shiori visit her, and she admits she has nothing. They decide to come up with choreography as a team, and perform splendidly. When the festival concludes, Choi, having noticed a mark on Tamako’s neck, declares her the Prince’s Bride.

Virtually every school-themed slice-of-life series is going to have a Festival episode or two that gives the characters defined goals and challenges them to rise to the occasion and meet them, and Tamako Market is no different. What’s admirable about the series is that the core characters are in a club (the baton club), but it hasn’t been a particularly integral part of the series. The show hasn’t lived and died by their…er...batoning; which is nice, because far too often it seems like series are dominated by club activities. And far more important than the actual performance (which was pretty good), was how the Baton Club arrived there.

Midori, the Fearless Leader, turns out to have quite a bit of fear after all. She cannot come up with choreography she promised, but maintains a  false facade of control and confidence as long as she possibly can. Ultimately breaks down when presented with all of the evidence she’s failing. She’s afraid of looking bad, even for a moment, but her team don’t want her to cry or hold anything in. There’s no shame in asking for help, or crying, for that matter. This episode is a feast for the eyes, with a plethora of nice little gestures, close-ups, hair-falling, leg-twisting, and eye-glazing. The characters really feel alive. We also liked the generous use of jump-cutting. Very, very nicely directed and animated.

P.S. Choi finally confronts Tamako with her belief she’s the one who must marry her Prince. Whether this goes anywhere at all, we’ll have to see.

The summer heat has driven away the shopping districts customers, so at the next meeting Tamako suggests they open a haunted house. Using the bathhouse storeroom, she and her friends prepare the house while the adult shopkeepers experience strange incidents that lead them to believe the district is cursed. However, three of the five incidents were explained logically by Shiori, and the other two fabricated by Kanna. The haunted house is a big hit, attracting lots of business to the district as intended.

As soon as the cold open projected a darker, more forboding atmosphere than we’d seen in the series to date, we were a little perplexed about what was in store this week, but after Tamako’s idea is revealed, it all became clear. With business in the toilet due to the summer heat, the promise of chills brought on by sundry frights proves a surefire way to bring the people out. Meanwhile, things like guardian stones and haunted houses bemuse and intrigue Dera, for whom they are foreign concepts.

It helps that everyone in the district is so tight, they not only promptly provide all the materials Tamako and her friends need for the haunted house, but they inadvertently perpetuate the rumor of the district itself being haunted, thus creating hype for the house. The adults did act a little goofily this week, but we’ll chalk it up to the heat. Ooji is absent this week, which is probably for the best, and at the very end the princess from Dera’s homeland appears, which should defintely shake things up.

Summer arrives, and Mochizou grows so troubled by his lack of progress with Tamako, he enlists the aid of Dera, whom he takes along to a class trip to the beach. Midori finds out what he’s planning and tries to stop him, warning him she’ll protect her. The next day, while swimming, Midori learns from Tamako what she and Mochizou are to her, and she softens her stance on Mochizou.

Tamako’s utter cluelessness with regards to romance and Mochizou’s complete lack of guts and initiative conspire to form a perfect storm of uselessness. In fact, the futility he senses due to Tamako’s denseness fuels his inaction in a vicious cycle. Tamako boils their relationship down to a couple of labels: “childhood friend” and “mochi-making buddy”, which, while technically true, are not the whole story. The trouble is, she may never hear that story; she’s just not emotionally available enough.

Meanwhile, Midori gets super-defensive when she learns Mochizou is trying to court Tamako. They quarrel, leading the ever-perceptive Dera to conclude they both love “the Musume”. Tamako tells Midori “I love you”, but Midori knows Tamako’s feelings for her aren’t anything like the ones she’s feeling for Tamako. Though Midori sorta makes up with Mochizou, their rivalry for Tamako’s heart should continue – even if neither of them has a chance against her thick skull.

P.S. The comic relief was ably handled by Dera, who was chased by a cat, a gull, and a dog, all while looking out to (a very beautiful) sea and thinking of his prince.

Spring arrives, and with it a new school year. Tamako is interested in her new classmate Asagiri Shiori, but Shiori won’t give her the time of day. Mochimazzi gets lost and falls from the sky and is caught by Shiori, who takes him home to Tamako’s. She stays for dinner and goes to the bath with Tamako. The next day she can’t find the words to thank her, but she ends up back at Tamako’s anyway, helping her lost teacher make a home call. Over coffee and music at the cafe, Shiori is finally able to express her thanks to Tamako, and the two become friends.

This was a very pretty episode, that made us wish Spring were here already. It also makes the friendship of the devastatingly shy Shiori and the bubbly, friendly Tamako almost a matter of fate. After all, external forces (Mochimazzi and the teacher) drew Shiori to Tamako’s house both times, but she enjoyed herself both times. It was also nice to see how an “outsider” deals with all the generosity and friendliness of the shopping district as a whole. If you’re a friend of Tamako, you’re a friend of theirs, too.

While we’ll admit part of us wanted Shiori to finally blow her stack and verbally unload on Tamako, that wouldn’t quite fit the tone of this series thus far. Instead, she practices thanking her in the mirror, and after some strong coffee and a little music, she’s finally able to communicate her feelings. Tamako and the bird aren’t causing her trouble. On the contrary, she always wanted to be part of Tamako’s world. And now she is. Croquettes and sakuramochi for everyone!…Except Mochimazzi…bird need to lose some weight like yesterday.