After two days of healing, Yuliy wakes up in the home of Dr. Harada, and makes fast friends with his daughter Saki. However, the nature of the doctor’s work doesn’t just keep him away from Saki, it also makes him a target for the elitist-killing Hyakko Gang…as well as the vampires. Both Willard of the Jaegers and Major Iba with the military separately attempt to connect the dots. 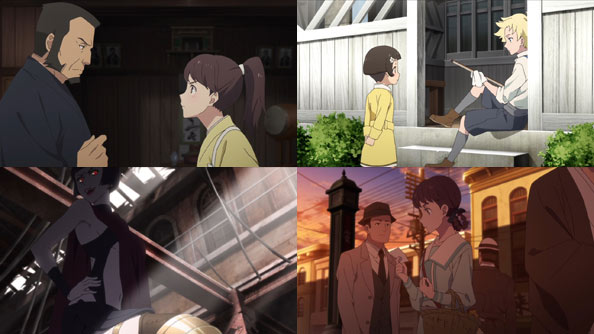 As Phillip keeps an eye on Yuliy as he finished healing up, Ryouko insists on paying Yuliy a visit. Clearly she was more intrigued than insulted by Yuliy’s aloofness and remark about rotting roots. Yuliy seems to be a bit of a green thumb, as he helps Saki set up some tomato plants—once believed to be poisonous due to their color.

As the doctor has worked day and night on his project—an artificial heart for Saki, who must have the same condition that claimed her mother’s life—his assistant sells out to the vamps, specifically a “re-built” Agatha who know has a sword for a leg. 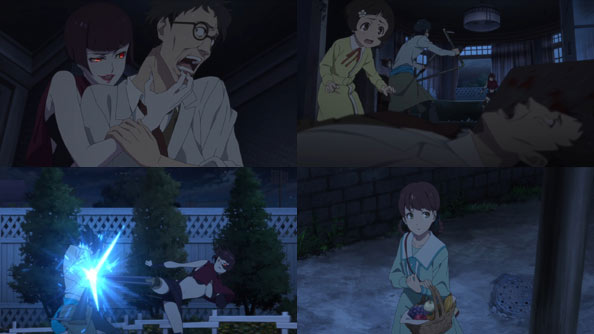 That night Agatha puts that new leg sword to work attacking Dr. Harada’s home, and neither Yuliy and Phillip can protect him and Saki in the ensuing fray. The doc is bitten and becomes Agatha’s thrall, and Phillip stuggles to keep Saki safe while Yuliy and Agatha take their fight outside.

While not as action-packed as the opening episode, I appreciated how more time was used fleshing out characters, and the action we do get is of high enough quality to make up for its late appearance in this ep, whether its the close-quarters of the inside fight or the more free-flowing combat outside—not far from where Ryouko has just arrived at the house. 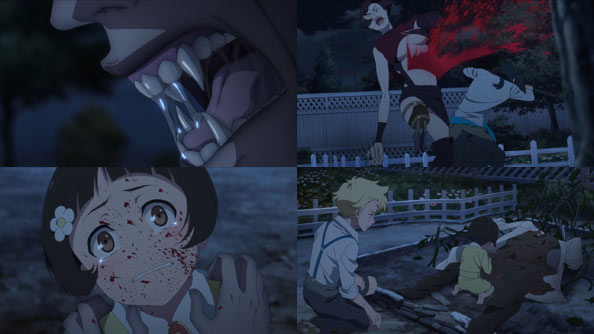 Agatha doesn’t quit deriding Yuliy’s very existence as a filthy “Sirius”, suggesting like in much of the rest of vampire-themed media, vamps consider werewolves a lower rung of creature…at best.

Filth or not, Yuliy is able to turn the tables of Aggy, shattering her leg blad and running her through with his segmented staff, the blade of which also goes straight through Dr. Harada’s throat just as he’s about to kill Saki, who instead is simply horribly traumatized as both her dad and Agatha crumble to dust.

As if that wasn’t enough, there’s an explosion on the other side of the house—probably the Hyakko Gang—and one more challenger who faces off against Yuliy on the rooftop. Yuliy calls this fellow brother, so he’s another Sirius (this is backed up in the new ED); but it’s clear they’re no longer on the same side.

As with other genres in which the eclectic P.A. Works has dabbled, the studio has delivered another solid and competently-produced entry that may not deliver much in the way of originality, but does check a lot of boxes I appreciate, from the vampire milieu to noir, mystery, history, and steampunk, with multiple factions, all with their own agendas.

That said, I’m still not finding Yuliy himself particularly compelling as a lead; the arrival of his brother could either raise or lower that opinion.