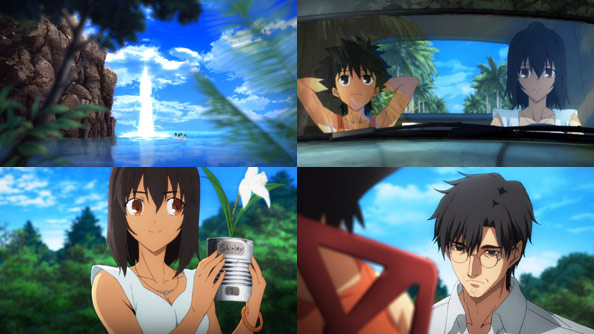 Per a reader’s suggestion, I am watching the next three F/Z episodes in the order of 18-19-17. We’ll see how this goes. At the end of episode 16, Saber wondered what the hell happened to make Emiya Kiritsugu the kind of person he’s become. Episode 18 begins to answer that very question by taking a trip back to Kiritsugu’s childhood on picturesque Arimago Island.

Things couldn’t start out any more idyllic, with “Kerry” (what everyone calls Kiritsugu) cliff-diving with his friends on an absolutely perfect day before being picked up by Shirley, a very pretty young local who is serving as his father’s assistant. Kerry’s father is mage, developing flowers that never wilt in hopes of someday applying the same principles to humans.

Throughout the episode’s first acts, the gorgeous tropical setting could never quite hide the fact that there was something very fishy about Kerry’s father taking up residence in a secluded property on a remote island for mysterious magical experimentation related to immortality. That’s a lot of red flags.

One night Shirley shows Kerry that her flower has wilted, and that she will never be able to be anything other than a glorified lab assistant. She believes Kerry has a bright future following in his dad’s footsteps, and they both agree that his dad is doing something that will be able to help humanity immensely.

Kerry also recoils from Shirley when she gets too close to him, as he’s of the age where boys typically deny their attraction to the opposite sex despite biological evidence to the contrary.

However, it’s clear Kerry likes Shirley very much, which makes it that much more heartbreaking when I realized that beautiful night they talked would be the last. The next day, Kerry’s dad asks if he went into his lab, then warns him to stay in the house for the day.

When Shirley doesn’t arrive at the usual time, he sneaks out to look for her, and finds an empty medicine bottle on the floor of her house. Shirley herself has set to work sucking the blood of the chickens in her yard, as whatever medicine she took turned her into some kind of vampire. 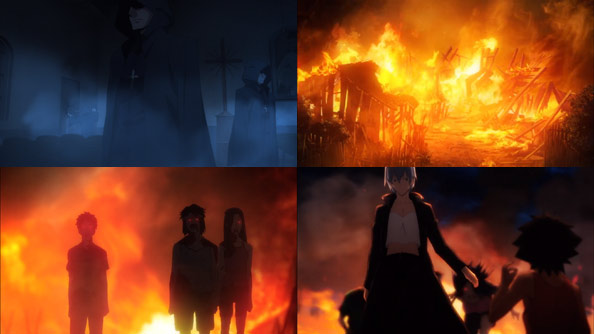 Kerry, unable to grant Shirley’s wish to kill her, seeks refuge in the church, but before long the entire island turns into a battlefield. The vampirism spreads quickly from Shirley to the other townsfolk, and Church Executors have to work overtime to kill them, while the Mages Association sets everything ablaze in order to protect their secrets.

Kerry ends up running through the middle of this hellscape (and as he’ll say to Saber years later, all war is hell) and almost gets himself killed, but he’s saved by a mysterious woman who is very handy with firearms, using them in an efficient manner that reminds me of Kiritsugu’s own style in the present.

She tells him everyone has turned into “dead apostles”, and she’s there to eliminate Kerry’s father…but Kerry gets to him first. When he asks his dad about his work and what it did to Shirley and the town, his father is, shall we say, not particularly contrite. Indeed, he seems to consider all of the horrible things that have happened a minor inconvenience, and is eager to escape the island get back to work.

Unable to muster any words in response to his father’s despicable attitude, Kerry stabs him in the gut with the dagger Father Simon gave Shirley to protect her from the evils he believed Kerry’s father to be messing with. He then takes a pistol and kills him, before the lilac-haired woman shows up.

By doing so, he did what had to be done, something he wasn’t able to do with Shirley, a misstep that ended up costing the entire town. As he escapes from the island with the woman, I imagine Kiritsugu—no longer “Kerry”—won’t be hesitating that much more from here on out.