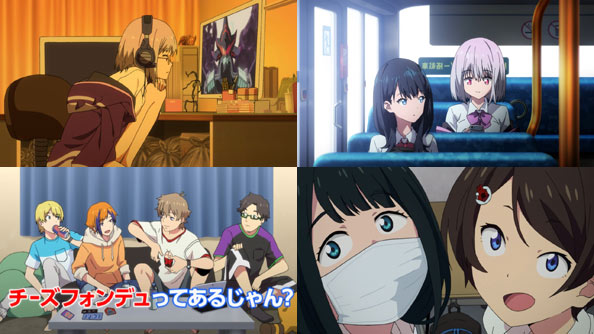 Akane is pretty sure Yuuta is Girdman, but not 100% sure. She wants to investigate further, which includes questioning Rikka when the two take the bus to school on a scorcher of a day. The two also end up joining Rikka’s friends Namiko and Hass on a group date with the Youtube group of college boys called Arcadia, despite the fact neither Rikka nor Akane are really into group dating…or any dating at all. 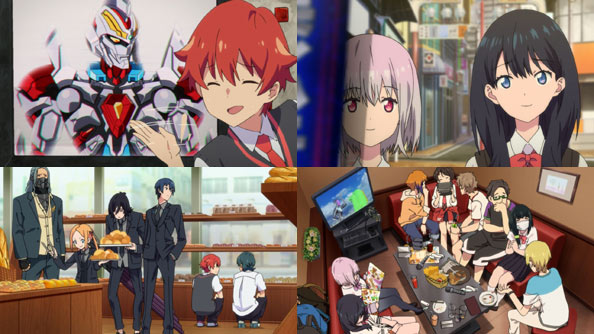 Yuuta doesn’t really like the idea of Rikka going on any kind of date that doesn’t involve him, and Gridman can sense he’s troubled about it (though Yuuta tells him not to worry about it). Yuuta and Shou decide to basically shadow the group date, as it involves two women they’re both emotionally invested in (in Shou’s case, Akane; in Yuuta’s case Rikka).

Neither really ever had anything to worry about; the only two women remotely  interested in Arcadia are Namiko and Hass. Akane is far more interested in learning why Rikka is spending more time with the guy she suspects to be aligned with her arch-enemy Gridman.

Akane also ditches the other girls at her earliest convenience, and succeeds in killing all but one of them with a kaiju. Rikka later catches on to the fact three of the four members of the group were killed and erased from the collective memory of society (including her friends), so she meets with the last surviving member, Yamato, to warn him of his impending doom.

She’s almost too late, as the fog that serves as the precursor to the latest kaiju attack envelops Yamato. It’s Samurai Calibur who ends up saving them both from the kaiju. Yuuta and Gridman deploy, but they end up having to fight not only the insectoid kaiju that killed the other members of Arcadia, but Item as well, who is singularly interested in defeating Gridman and nothing else.

All four members of Neon Genesis decide to sortie at once, but when combined with Gridman’s deployment, the computer they’re all working through basically freezes, freezing all of them in turn. Rikka scares the shit out of Shou by unplugging the computer, then plugging it back in and rebooting it, but doing so actually solves the problem, as the whole of Neon Genesis simply isn’t able to sortie simultaneously. 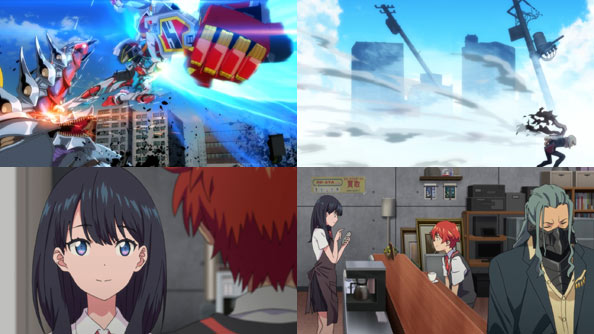 Instead, only one of them, the tank from last week, sorties, combining with Gridman into Gridman Max, defeating the insectoid kaiju. Item then reaches his time limit and reverts to his human state. It’s another victory, albeit a close one.

Later, at the shop, Yuuta works up the courage to ask Rikka out to grab something to eat, but she misinterprets it as a suggestion for the whole group to have a meal together. Mind you, Yuuta could mend the misunderstanding with two words: “just us,” but of course he doesn’t, mimicking Wile E. Coyote in the “trying something only once” strategy.

This was an episode in which the large-scale battles between Gridman and kaiju took a backseat to the high school romantic drama unfolding between Yuuta, Rikka, and Akane. Yuuta has proved pretty inept at getting Rikka to notice him in the way he’d prefer, but he should have plenty more opportunities, especially since she doesn’t have the slightest interest in Arcadia’s Yamato.