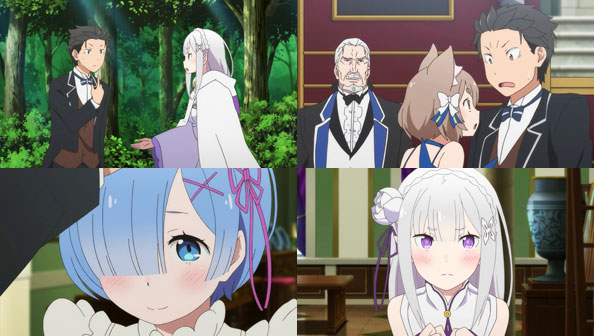 No sooner does the Twin Maids arc conclude than the pieces are gathered for the next, one centered on the struggle to claim the throne. Those pieces include a grizzled chauffeur who is clearly more than a chauffeur, a catgirl emissary who turns out to be a guy for some reason, and the other young women vying for the crown, including one who was in my blind spot.

Meanwhile, all’s well at Roswaal’s mansion, and Rem is far more affectionate towards Subaru. Unfortunately, there wasn’t time to show us much of Emilia and Subie’s date in the village, but I’m not complaining about the show’s efforts to move on to the next big storyline without dilly-dallying.

Subaru is able to accompany Emilia to the capital, but mostly so he can be treated by the catlike Felix, a skilled magician and healer. But we know why he’s really coming: to look after Emi-tan and make sure no more trouble befalls her. Emilia, for her part, would rather Subie take it easy after nearly being eaten by evil dogs so many times.

The return to the capital is marked both by reunions with old faces (the apple vendor; Old Man Rom) and new (the lovely but insufferably haughty Priscilla Barielle and her knight). Another knight kisses Emilia on the hand and sets Subie off, but I for one think he’s being a bit over-possessive throughout the episode. His heart’s in the right place, but don’t crowd the girl, Soobs. 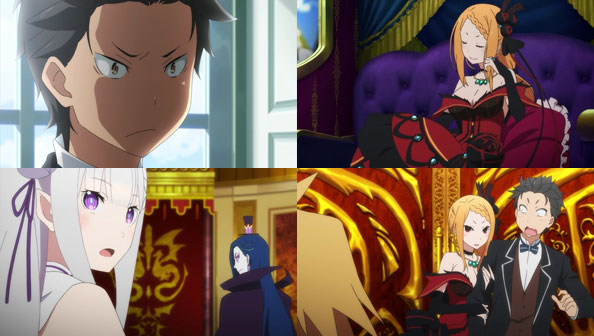 Emilia tells Subaru to stay put when she answers the summons for the latest selection process at the palace, but Subie can’t obey, and Rem, now a solid friend, ally, and admirer, doesn’t make him stay, and even gives him her blessing. Emilia’s reaction to seeing him there—with rival to the throne Priscilla on his arm, no less—is understandable. She was really hoping Subaru would prove she can trust him not to go overboard for her sake. He had one job.

Sure, it’s not for her to say where Subaru should go and who he should meet with, but it’s also not Subaru’s job to watch and inspect every move she makes, either. I can’t believe I’m saying this, but it’s looking like these two could use some space from each other, or a least some perspective. Who they are to one another, exactly, could help inform how they interact and avoid clashes of this nature.

Reinhard and Felt were conspicuous in their absence throughout much of the episode, as the last time we saw the two the former had knocked out and arrested the latter. I joined Subaru’s curiosity in what the heck actually went down with all that, and this episode gives us the answers we seek.

Felt is, like Emilia, Priscilla, and two others (one with a Kansai accent, somehow), a candidate for the throne. Not only that, she’s the one Reinhard will be rooting for to become queen. Felt’s entrance at the end is pretty badass, and the look in her face is appropriately bemused and overwhelmed.

Not only that, Felt is someone, like Emilia, I’ve always rooted for, but now they find themselves on different sides of a power struggle, with eager entourages and followers watching their every move. This should be interesting.

Subaru may not have Returned by Death in a long time—something that builds its own tension—but for now, that takes a backseat to more pressing issues of imperial rivalry and intrigue, just as Emilia was mostly on the margins of the Twin Maids arc. May the Best Girl win! 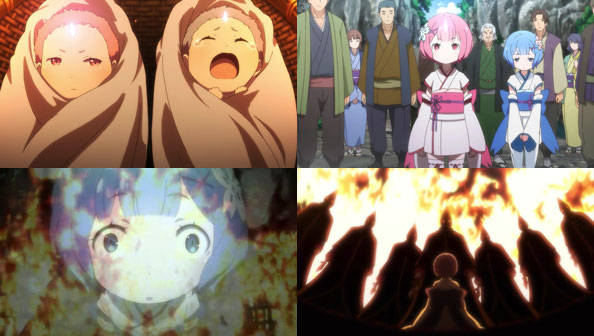 Re:Zero continues to dominate our Spring schedule, blasting ahead of the field and lapping it numerous times with its awesomnitude. Last week set things up for another potential heartbreaking reset, but instead there was no death nor Return by Death; only victory and sweet sweet closure.

It begins, surprisingly enough, with the origin story of Ram and Rem. We’e only known the relatively inept-at-everything Ram, but she was once a demon prodigy, despite only having one horn. Indeed, a display of her power kept her and Rem from being killed in the cradle. All Rem could do was try to be content in standing behind her sister as she dazzled everyone with her talents.

But one day, when their house was attacked and their parents killed, Ram lost her horn while protecting Rem. This Rem-centric flashback makes a point of showing the tiniest of smiles of relief on Rem’s face when that damn horn, which had caused her so much grief and self-hatred to that point in her life, finally broke.

And yet, back in the present, Rem has never forgiven herself for smiling, or for envying her sister, or for putting her in the position of having to protect her at the cost of her horn. The “inept, less-than” Rem is a product of Ram’s weakness and worthlessness, and she’s been trying to make up for that ever since, including going after the Mabeasts alone.

Upon coming to, her first reaction is distress that Ram and Subie are there, rejecting her whole notion of sacrificing herself for them. But they can’t change the fact they’re there, here and now, and aren’t going to abandon her.

Instead, Subie promises he has a plan for the mabeast boss, and sends Rem away on Ram’s back to safety. Rem, however, can’t help but call back to Subaru, which just so happens to imbue him with the courage and confidence to pull off his trump card: a Shamanic spell that gives him the opening he needs to stick his broken sword in the mabeast’s throat.

Unfortunately, that’s not enough to kill it, but just before he passes out from using all his mana, Roswaal arrives to mop up, grateful his subordinates were able to hold their own as long as they did, and all too happy to help.

Rem pounces on Subaru, happy beyond words he’s still alive, and though he passes out and wakes up in his bedchamber, the curse is lifted, so he didn’t die and the same timeline continues on, much to my delight.

He wakes with Rem’s hand in his, and he then must endure an extended monologue filled with self-loathing and inadequacies stemming all the way back to when Rem and Ram were newborns about to be killed. Even then, Ram saved them, while she just laid there.

Obviously, Rem is being far too harsh on herself, undermining the wonderful, powerful individual she became by her own efforts, and far too quick to dwell on the past. Subaru tells her she should focus more on the future, value herself more as others like him do, and smile and laugh that life turned out as well as it did. And Rem eventually lets herself laugh, albeit with tears in her eyes. BAWWWW.

With all the talk of leaning on one another, this sure looks like the start of a Subie x Rem romantic arc, but the next time we see Subie, he’s asking Emilia on a date like he did before, and again she accepts, even with her fuzzy concept of what a date is. So I guess Subie’s primary love interest remains Emilia.

As for Ram, now far less than she once was, but at peace with it, we see that her sessions sitting in Roswaal’s lap are so he can restore her mana. Since Roswaal brought her and her sister into his home, Ram has always been utterly devoted to him, and he makes it clear that he may be away for a while, so Ram must continue to take care of her little sister and Subaru in his stead.

I don’t know what tragedy might befall our friends next (and I’m sure they’re in for more trouble), I’m glad for an ending without a taste of what’s to come, that I may simply revel in the progress that Subaru has made. He and Rem have come so far, but the evolution of their friendship couldn’t have happened more naturally, as if it was always meant to be this nice. Also, hopefully Subaru will get to actually go on a date with Emilia!