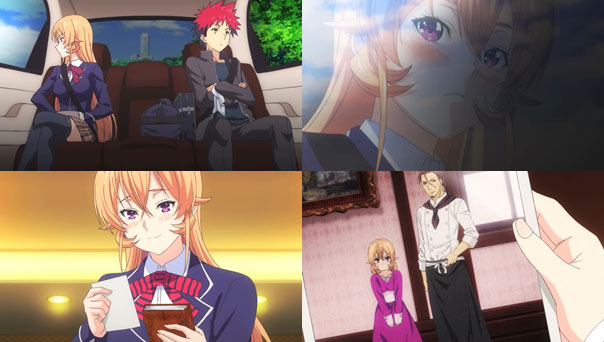 Food Wars is back from its week off with a new OD, and new ED, and a new arc. I daresay I missed it, even with all the interesting new Summer shows starting up. The cold open shows Souma’s dad arriving in Tokyo (passing under Hokusai’s Gaifu Kaisei, which also happens to hang above my TV) only to show up in the least likely of places later on: in a photo from the past Erina cherishes so much, she lets the buses leave without her so she can retrieve it from her hotel room.

As luck would have it, she ends up on a long car ride home alone with Souma of all people. As she shoots down his attempts at conversation, she makes it a point to voice her consternation with his past point about learning through failure, as he did with his omelettes. Erina believes that to be an excuse by a weak loser; failure is not an option, no more than it was for “Him” (i.e. Souma’s dad, presumably). You bring perfection to the table every time, or nothing at all. 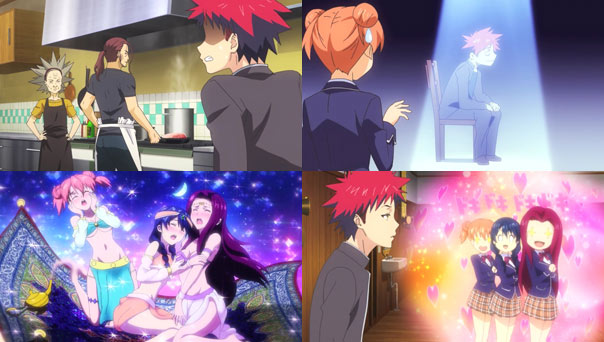 It’s a nice moment to see everyone return home to cozy ol’ Polar Star Dormitory, especially when they’re treated to a nice Welcome Home meal. The shock comes from the chef preparing it: Souma’s dad. But the only one who knew he was Souma’s dad was Souma; everyone else knows him as the former second (only to Doujima) seat of Totsuki’s Elite Ten, Saiba Jouichirou. Upon receiving this news, Souma, who never had an inkling of any of this, actually gets frazzled. It’s a rare sight.

Souma’s dad proceeds to wow his dormmates with exotic dishes that express his worldliness and wealth of experiences cooking abroad as a kind of nomadic culinary mercenary. The girls are all but enslaved by the flavors, and when they see what a manly bearing his dad has, they turn to Souma, his son, with optimistically beaming faces. ‘This is what Souma will become’.

That night Souma helps his dad clean up and they shoot the breeze, the father and son having been apart for so long, there’s likely much to say. Yet no matter what was said, Souma’s perspective on his father changed completely on this otherwise nondescript night. He now knows he’s walking in a shadow at Totsuki, even if the rest of Totsuki doesn’t know of their relation. Jouichirou even makes it clear he didn’t technically graduate from Totsuki, because “things happened.” ‘Things’, I imagine, that included Souma.

All this time, Souma was walking in his father’s footsteps without knowing it, and without anyone else knowing it, except Jouichirou himself. And possibly Doujima. That brings me to Erina: does she know? (Don’t answer that.) Is the reason she’s so hostile to Souma because Jouichirou, whom she idolized, had to withdraw from the “front line” to raise his kid? Is that the failure she speaks of? Or is she as in the dark as practically everyone else, and will be as shocked as all of the Polars when she learns of her long-standing connection to Souma?

Whatever the case, I like the new dimension given to both Erina and Souma, as we witnessed her flash a nostalgic smile and him suddenly out-of-sorts and unsure of how to take all the new information he’s had dumped on him. Souma’s reason for enrolling at Totsuki was to get his dad to acknowledge him, but now that he knows what a huge big shot his dad is, that feat must feel even more challenging than when he just thought he was going to make his pop proud.

Now it turns out he must face off against his toughest opponent yet—and Jouichirou doesn’t give him any time to relax.