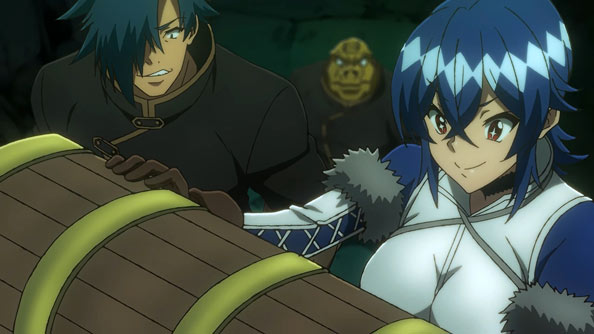 Shia leads Ninomiya and Wanibe on a training expedition on the second floor, armed not just with a sword, those lovely star-filled eyes, and those diamond highlights, but a filled-to-brimming tank of enthusiasm for Being a Good Corporate Drone and Doing One’s Duty The Right Way.

Ninomiya has even less energy for this nonsense than usual because he has to produce five million gold in a month or his loan shark will take his life. He doesn’t have time to do things by the book. With his literal life at stake, one can’t begrudge him embracing methods some might call…unsound.

The team encounters a Majin, the monster of legend that causes a “Death March”—treated by Raiza’ha as an unavoidable but potentially profitable natural disaster. Turns out Shia’s employers set her up to be the latest in a long line of powerful human sacrifices to appease the Majin.

What they didn’t count on is that one of the grunts with her is Ninomiya Kinji, who has an ant army at his disposal and soon starts farming monster parts for gold.

As for the Majin, it’s too tough even for the great Shia (its laser beams really pack a punch), so Ninomiya suggests they retreat. Unfortunately the emergency magic crystal dagger used to transport back to the surface only works on one person.

Naturally, Shia gives it to Ninomiya, but her ensuing melancholy goodbye melts his cold cold heart and he not only stays behind with her, but throws the dagger at the Majin, transporting it to the surface where it becomes the company’s problem, as it should be.

The Majin, drawn to Shia’s considerable mana, eventually makes his way back down into the dungeon, where Ninomiya is ready for him in the form of a giant pit trap into which the Majin falls. Ninomiya then has his ant minions fill the pit with cement, and has Shia dry it with her wind magic. When that isn’t enough, he sets the whole thing on fire. Shia can’t argue with Ninomiya’s ends, but the means disturb her.

When the Majin still won’t die, Shia resolves to defeat it, as is her “duty and destiny”, even at the cost of her life. It’s here where Ninomiya unfortunately decides grope her, losing a lot of goodwill he’d built up recently. He admits he looked up her family history, and how her father was of the absentee adventurer variety.

He deduces that Shia has been “brainwashed by thoughts that benefit Raiza’ha”, in part because she was happiest once she joined the company. But just because it improved her life doesn’t mean that life is theirs to throw away and call it “duty”. Raiza’ha isn’t a nation, and Shia isn’t a soldier. She’s just a damn at-will employee.

After being rescued in the nick of time by Rimu, who then quickly dispatches the Majin she reports was “incomplete”, Ninomiya claims victory…for himself, continuing to cement his role as an incorrigible sonofabitch. But he made some good points to Shia about casting aside the corporate conditioning and determining what she wants to do with her life.

If that’s continuing to work hard, fine. If it’s working hard for a company that just tried to sacrifice her to an eldritch abomination, that’s not fine. We’ll see if Ninomiya’s core message gets through to Shia, despite the messenger being a cad.

Taking in a pet behemoth wasn’t all it was choked up to be, but now both Ninomiya and Wanibe are reassigned to Raiza’ha Mining Corp.’s Exploration Division, Group 8, performing menial support duties to the elite front-line groups like Group 3. No sooner does he discover that excellently marbled beef is dirt-cheap in this world than a hungry Rimu snatches it and gulps it down after stoving his head in the wall.

The job soon wears down Ninomiya’s spirit, to the point he’s sheepishly obedient. He doesn’t like it, but fate smiles upon him when he crosses paths with a member of that elite Group 3, separated from his companions. He’s being chased by a swarm of giant ants, but armed with various potions for stocking treasure chests (someone has to do it), he mixes some ant leg shavings one of those potions, turning himself, his elderly supervisor, and the Group 3 kid into ants.

For a large portion of this episode, it’s all ants, all the time, which is just so refreshingly weird to behold. Ant!Ninomiya has the same gestures as regular Ninomiya, and even a shock of blue hair. What’s even better is that he’s not a totally self-serving asshole this week! Now, I’m not going to say convincing the ants to join his cause doesn’t benefit him, but the entire enterprise was born out of empathy he felt for the endlessly toiling ant drones.

Of course, it isn’t long before the rabble-rousing Comr-ant Ninomiya (who has turned back into a human) encounters Management, AKA the Ant Queen. When Ninomiya accuses her of simply lounging around while her subjects work themselves to death, she responds by demonstrating her brute strength, molting to become thrice her original size. Even then, the timely arrival of Rimu spooks the queen into submission; she who knows exactly what Rimu is.

Ninomiya than earns the queen’s esteem by taming Rimu with what I’ll call “Chekhov’s Marbled Steak”. Once Wanibe, who had been laid up with a injury throughout the ant-venture, returns to work, the fire is fully back in Ninomiya’s belly, and he has a proposition for Wanibe: join his new organization for bringing down the corrupt oppression of Raiza’ha Mining Corporation: the titular Meikyuu Black Company.

With both Rimu, the Ant Queen and her army as his allies, he’s very quickly become someone to be taken seriously; an Ant of the Peopl, if you will. And while I got a kick out of watching Ninomiya be an asshole and get punished for it, it’s even more rewarding to see him seemingly learn from the mistakes of the past and attempt to be a better man, lifting others up along with himself and reaping the rewards of loyalty and fellowship.

I must say really didn’t expect this isekai show about an arrogant NEET layabout to become so…socialist so fast, but now that it has, I find it delightful, and can’t wait to see what craziness is in store next week—or who of the five main characters in the OP and ED we’ll meet next.

You wouldn’t think a day in which Kiyoshi was shanked in the ass by a tree branch and almost peed on by Hana would end up being a good day for him, but that’s the kind of crazy world Prison School is. There’s no situation too inappropriate or absurd that won’t befall its protagonist, and yet he remains resolutely human and moral.

Knowing a rift has formed between Kiyoshi and Shingo, Mari aims to drive a large, voluptuous wedge right through that rift, widening it. That wedge is Meiko, who begins giving Shingo special attention treatment, plying him with sweet treats and panoramic views in order to make him a snitch. Shingo, still pissed about his extended sentence, obliges all too easily. 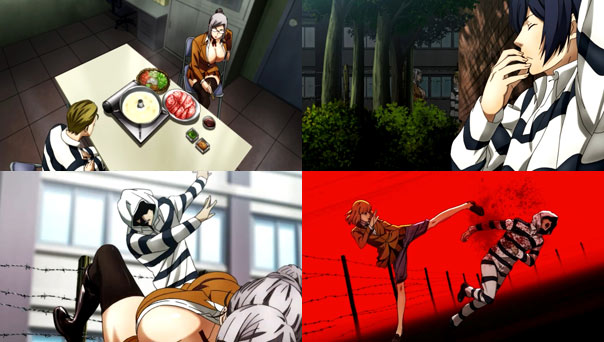 What’s weird and kind of endearing about Meiko is that while she’s built like a brick shithouse, the show makes sure to keep ambiguous whether she’s aware of how seductive she is. Her inner thoughts are more interested in making sure she doesn’t say something to upset Mari, who will then sic her crows on her. Regardless of her self-awareness, the sound effects employed whenever she’s doing something are pretty amazing.

With an inmate who will do whatever they want, Mari decides to implement a plan to stir up trouble, after intentionally applying more stress and punishment to the other inmates (or, to Andre’s detriment, less punishment). Her target is Joe, the least stable of the quintet, who loses it when it appears a crow is killing his beloved ants.

He’s just waking up when he notices Meiko and Shingo talking in the shadows, but Kiyoshi still finds it odd that the entire council is out in force in the schoolyard. Then Joe produces a branch-as-shank and lunges at Mari, and something happens the president did not expect: a man protected her from harm. And in front of half the school watching from the windows. Unfortunately, his good deed is overshadowed by the fact the branch went up his ass, creating a great deal of blood. …And the fact Mari still despises men.

Joe is thrown in solitary (after being told the crow was only “bathing” in ants as a grooming exercise, not killing them; a neat bit of ornithology mixed into our ecchi comedy!), and Kiyoshi is escorted to the nurse’s office…by Hana. Last week Hana promised she’d pay Kiyoshi back, and after being unable to force him to pee into a jug, she decides to accelerate her plan and pee on him herself. Things get pretty far, with her shedding her leggings and panties, but Chiyo inadvertently, temporarily saves Kiyoshi when she pays a visit to the nurse’s office.

Unfortunately, that also means Hana and Kiyoshi have to hide from her, under the bed, occupying as little space as possible to avoid detection. As neither Kiyoshi or Hana are wearing underwear, Hana is a girl, and Kiyoshi is a guy, things outside his control start to happen. He’s bailed out again when Hana passes out, either due to the heat or from overexcitement.

In any case, Kiyoshi and Hana continue their very bizarre kinky physical relationship rooted in dominance and tit-for-tat; the precise opposite of the wholesome romance he desires with Chiyo (or, in his own words, “coming on to her just enough that she doesnt’ think he’s a creep”). While that’s going on, Mari’s dad the Chairman has his own close call when Mari visits him in his office…just as he’s opening a latin ass jerk-off device he ordered from Amazon(ess). That latest blunder from her dad kills any goodwill Kiyoshi might have created by saving Mari from Joe.

But his heroism wasn’t all for naught: he didn’t just save Mari from a shanking; he saved Joe from possible arrest and internment at a real prison, something Joe thanks Kiyoshi for, being the first inmate to break the “shunning line” set by Shingo. At this point, even a weirdo like Joe can tell something not quite kosher is up with Shingo, and Kiyoshi lets him know that whole lunch break situation was similarly odd.

This is good, because it means Kiyoshi’s instincts aren’t entirely blind to the council’s DTO machinations. But he still doesn’t know what’s going on, only that things are off. With Meiko offering Shingo a uniform and two hours of freedom off-campus, Shingo remains in the council’s pocket. Whether he knows it or not, he is the weapon Mari intends to use to get all the guys kicked out—something, by the way, Hana seemed reluctant to agree with at first; I must look out for that, as she has her own agenda.