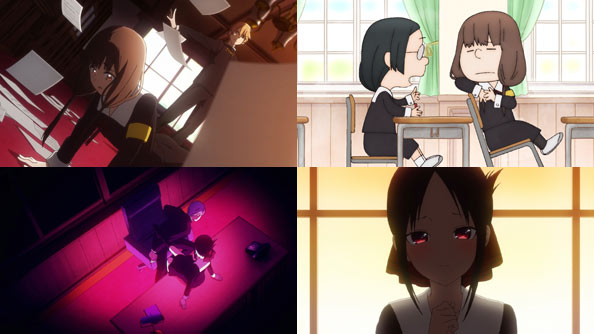 In the first segment, Miko becomes the protagonist of her own LIW spin-off as she regales Kobachi with harrowing tales of her experiences in the StuCo that have brought her to the brink of resignation. The drama of various incidents she’s witnessed from various doorways are greatly heightened, and their context twisted to feed the narrative of Miyuki as “Lust Incarnate”.

Kobachi assumes Miko has simply misunderstood each of these incidents, but Miko ends up learning the wrong lesson by simply shifting the role of StuCo supervillain from Miyuki to Kaguya, labeling her “Evil Incarnate” and recontextualizing the incidents as engineered by a deviant and sadistic mind.

However, Kaguya’s response when Miko confronts her—phrased as “What do you think of Miyuki?“—garners such an unexpectedly pure and guileless response, Miko is left not knowing what to think of everything she’s seen and heard…which means she loses. 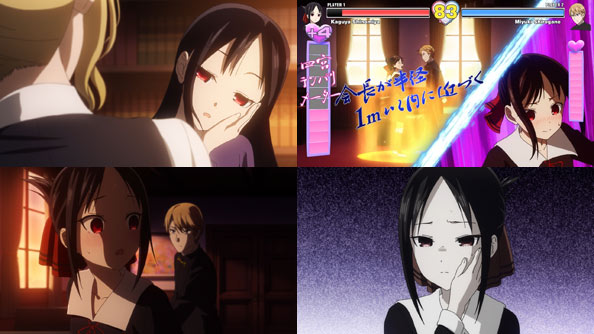 The next segment is Kaguya-centric and builds on the purity of her response. She’s been avoiding Miyuki ever since her hospital visit, lamenting to Hayasaka how she’s become incapable of staying calm and collected around him. Hayasaka suggests Kaguya takes a page from Ichiro and other sports personalities and adopt a “calming ritual” to steady herself in stressful times.

The process for adopting such a ritual starts with Hayasakai turning on some music and simply having Kaguya dance it out, calling to mind Chika’s awesome dance ED last season as well as being thoroughly adorable. Kaguya eventually settles on touching her left cheek with her right hand, and even impresses Hayasaka with the speed with which she masters the gesture.

However, when it comes time to use it, Kaguya finds herself locked in a Street Fighter II-style match with Miyuki, who unloads a number of special moves that raise her anxiety levels way past safety levels (enter a great momentary cameo by last week’s elite doc…and his theme music).

In the end, despite losing most of her HP Kaguya wins the match by resorting to the use of her black belts in Aikido and Judo, thus freeing her right hand from Miyuki’s grasp. As soon as she touches her cheek she’s calm again…only to immediately lose that calm when she realizes she hurt Miyuki! Still, the ritual worked, so she wins. 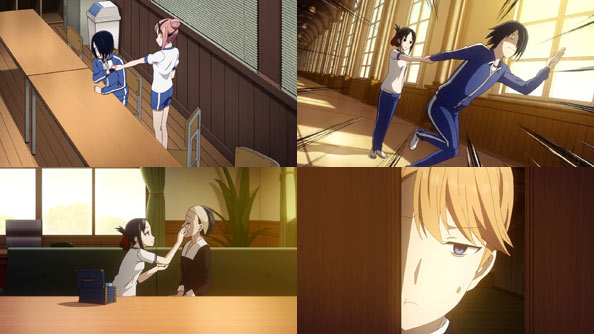 In the third and final segment, Yuu rather inexplicably joins the cheerleading squad, which is akin to a polar bear seeking refuge in the middle of the Sahara. He immediately regrets his hasty decision, as he finds himself among members of the “Tribe of Yay!”, while he is, at best, of the “Tribe of Meh”.

When the group agrees on gender-swapping their uniforms, Yuu finds himself in a spot: Miko will refuse because she hates him, Chika will judge him because she’s so real with him, and Kaguya certainly won’t do it because…wait, Kaguya is happy to do it! “Anything for a StuCo colleague in need” and all that.

Kaguya seems to get a kick out of putting Yuu in her school uniform, as well as applying makeup. Miko sees the former (again, sans context) through the partially opened door and flees without comment (another chapter for her spin-off). Then Miyuki peeks through the door as Kaguya is having fun with Yuu and is naturally super-jealous. Oddly, this segment ends without a winner or loser, but promises that Yuu’s story will continue next week during the Sports Festival.

LIW continues to exhibit a strong penchant for diversity in both style and substance, always keeping us on our toes on what it will dish out from segment to segment and yet never letting us down. My only mark against this episode is the dearth of Chika and not quite enough Kobachi, whom I’d like to see more of. But the show has a rare gift for keeping things both fresh and focused. Its characters are always strong and consistent pillars in a motley universe of unpredictable scenarios and cleverly subverted tropes. 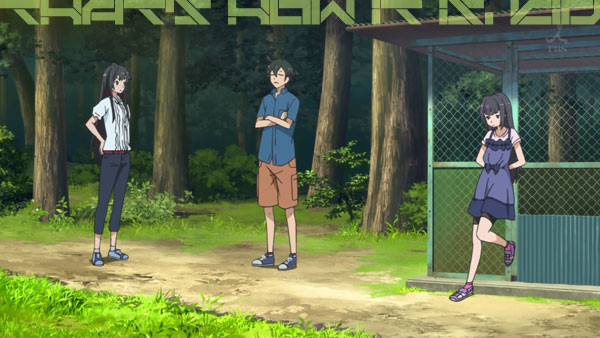 Hiratsuka tricks Hikigaya in accompanying the rest of the Service Club plus Komachi, Totsuka and the “it-crowd” to serve as summer camp advisors for elementary schoolers. Hikigaya and Yukino notice one of the youngsters, Tsurumi Rumi, is being shunned by the others, and Yukino decides to expand the club’s mission to helping her out.

Hiratsuka Shizuka is, on the surface, your typical “pathetic young bachelorette teacher”, a common sight in school-based anime. She chain-smokes, dreams of being back at college, and the amount of texts she leaves Hikigaya in quick succession may indicate her luck with relationships. But she’s not one note. She’s brought Yukino, Hikigaya, and Yui together in order to try to improve their personalities. In a way, she’s trying to make sure they don’t repeat whatever mistakes she may have made in her youth. 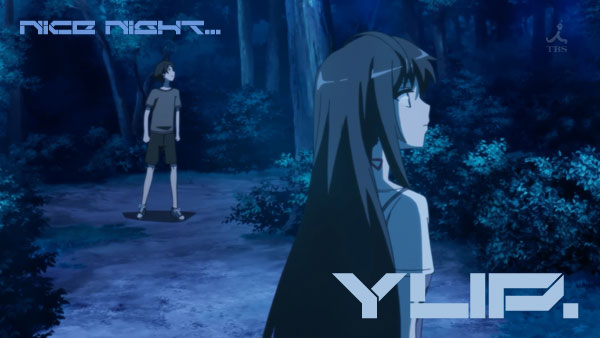 That’s the job of any “elder”, and as this episode makes clear, “elder” is a relative term, and not one that describes an all-knowing entity. No matter how old you get, there is always going to be something you haven’t learned; something you don’t know. This episode was full of people trying to help those younger, while not themselves knowing quite what the answers are. As their teacher tries to get them to get along with the it-crowd, they aim to help Rumi get along with her peers.

This episode was full of a lot of subtle social interactions that really rang true across all levels of life. Rumi doesn’t know quite what happened or why, and is afraid to ask for help because she was once on the other side of the shunning, and feels she doesn’t deserve pity. Whether it’s grade school, high school, or adulthood, “humans are humans.” They can get along and all be happy, but it takes work…work that is never done. 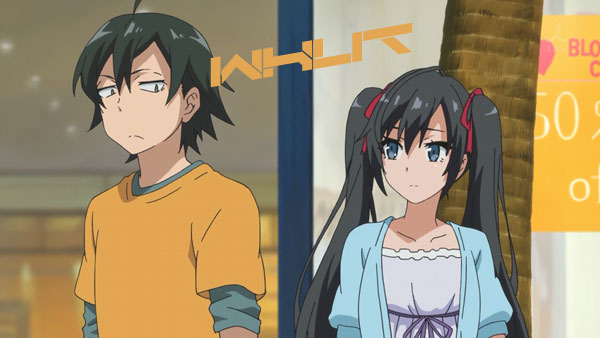 Things between Hikgaya and Yui get awkward, and she stops coming to club. To bring her back into the fold and express gratitude for her help, Yukino suggest they celebrate Yui’s birthday. Hikigaya and Komachi go shopping with Yukino, but Komachi ditches them and Yukino’s sister gets the wrong idea. Yui is also at the mall and her dog comes off his leash. The dog goes to Hikigaya, and Yui sees him with Yukino and also gets the wrong idea. When she comes to club as requested, Yui finds out the real reason they were at the mall, and Yukino helps mend the friendship between Yui and Hikigaya.

High school is one of those crucibles where lifelong friendships and even marriages are formed. It’s where children start to become adults and form more complex relationships. That’s not to say the relationships are simply formed and remain static throughout; they go through phases. Hikigaya and Yui experience just such a phase change this week, as both of them entered their relationship with very different ideas about what it was. Yui can’t put it into words exactly what went wrong, but that’s what Yukino’s for: mutual misunderstanding led to the awkwardness, so she suggests a fresh start. In this new phase, Hikigaya is aware that Yui’s not just being nice out of guilt or pity, and Yui is aware that Hikigaya wasn’t trying to help her.

Thus the beginning of their friendship has ended and a new phase begins. Just as so many people mistook Hikigaya and Yukino for a couple (and we’re sure deep down they actually wouldn’t mind that), Hikigaya and Yui mistook the nature of their relationship. Yui genuinely wants to be Hikigaya’s friend regardless of debts or pretense, which should satisfy Hikigaya’s refusal to be pitied or patronized. And now, in spite of his antisocial ideals, Hikigaya now has two friends who want to be his friends, even if one didn’t make it immediately clear and the other outright refuses to.

After Hikigaya Hachiman writes an unpleasant essay detailing his antisocial views on high school life, his teacher conscripts him into the Volunteer Service Club, which only seems to have one member: Yukinoshita Yukino, whom he deems to be the most well-known student in the school, due to her good looks. It falls to her to solve his “problem”, even if he doesn’t think he has one. When a third student, the ditzy Yuigahama Yui, asks the club to taste her cookies, she is impressed by their honesty and the advice they give her, and inspired to try harder. After his dealings with Yukino, Hachi becomes open to the possibility of being friends with her.

– I’ll change the world and everyone in it.
– That’s a seriously crazy goal.
– Maybe, but I still think it’s better than being dead inside like you.

After OreShura, we’re kind of wondering if its worth it to delve into another rom-com focusing on “anti-love” characters who may well end up together in the end after much stress and strain. And Hachiman’s opening monologue about how he detests those who enjoy their youth is a bit doesn’t have nearly the punch it would if we hadn’t already heard a similar spiel last season. Still, after watching the episode there are sufficient differences between both obnoxiously long-titled to justify giving it a go, and so we shall. We’ll just have to resign ourselves to the fact comparisons will be often and unavoidable.

For instance, like Eita, Hachiman’s worldview is based upon a past trauma, but while Eita’s folks abandoned him, Hachiman has simply tried the normal school life, was hurt by the rejections of girls he liked, and scared of being hurt again. Like Masuzu, Yukino treats her beauty as a burden, creating just as many potential enemies as friends, so she stays above the fray. We even saw a little Chiwa in Yui-Yui, as they’re both orange-haired, bubbly, and comfortable around Hachi (or Hikki, as she calls him). But there’s not yet any indication of this turning into a harem; Yukino seems determined to maintain emotional distance. She will probably not succeed.

Vexed by extremely warm weather, the Neighbor Club makes a trip to the pool park. However, both the bus and the venue are extremely crowded, making the antisocial Yozora and Rika ill. The club is only there for a brief while before Sena gets a text that Yozora and Rika took off. Kodaka and the others leave too.

Like Ben-To, Haganai tries to put its own mark on the done-to-death fanservice fest that is the pool episode (the second of this series) by having two of the characters so socially awkward, they don’t even change, which is a refreshing twist. The final scene, with everyone going home in a somber mood that’s played for genuine drama, also jumps out of us as something that goes against the type.

Otherwise, there’s not much we can say; there was a ton of service, much of it focusing on Sena’s huge cans (the hugeness seems to vary greatly), Yukimura’s questionable gender, Rika’s dirty mouth, and Kobato’s inapproprately revealing-for-a-middle-schooler swimwear. Also, there were precious few minutes of Yozora-Sena bickering, though it was replaced by Maria-Kobato bickering, which is worse.