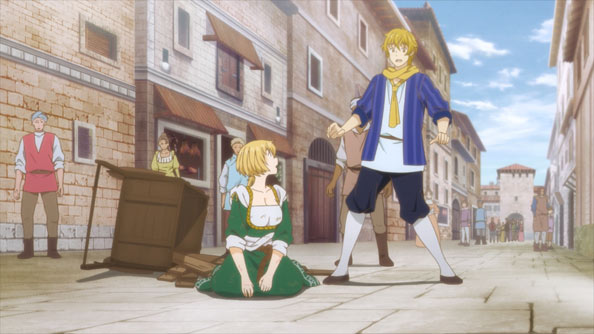 This week Leo gives Arte a sack of money to go out and purchase the materials needed to fix her rooftop shed. Seems simple enough, except that Arte has never had to do any of this before. Every man she interacts with treats her coldly as she goes about business they wouldn’t give a second thought to if she were male.

This kind of misogyny is nothing new to Arte: most men around her assume she’s less than (or biologically unsuited) to do the work they do, and hence they treat her with aversion. The other side of the coin is someone like Angelo Parker. Unlike most of the other men, he treats women with kindness and is eager to help them. That’s nice and all, but it comes out of a sense that women are weak and unsuited to most tasks, and require his help.

It’s paternalism, which he learned from his father (obviously). Angelo has many sisters and as soon as he arrive home they line up to be pampered by him, and he’s all to willing to do so. Now I’m not saying Angelo is a bad guy or a bad brother and son—he’s neither. But he has the wrong mindset for anyone who might want to get involved in Arte.

Compare how Angelo treats Arte throughout this episode to Leo. Thus far, Leo hasn’t made an issue of Arte’s gender, only her worthiness as a person to be his apprentice and an artisan. Arte may be clumsy at times, but at no point has she slacked off given Leo any reason to doubt her commitment. He works her hard, but it’s because he’s setting challenges so she can prove to herself what she’s capable of.

A concept like this is foreign to Angelo, not because he hates women, but because he sees them as too different to be capable of what men are capable of. It explains his quizzical looks when Arte reacts negatively to his gestures of goodwill. Case in point: his master refuses to let Arte sketch a sculpture in his studio, Angelo offers to sneak her in.

But that defeats the whole purpose of striking out as her own independent person. Sure, you’ll need helping hands from people now and again. But Arte is determined to change the master’s mind on her own, and sketch his sculpture with his knowledge and approval. Even if that means lifting ten of what look like 60-pound bags of clay all by herself. Sure enough, watching “a girl do it” in practice convinces the master, as well as endears her to him.

Arte likes Angelo, but doesn’t need him to save her or spoil her. Instead of confused or quizzical, his parting look after Arte explains this is one of revelation. He realizes he doesn’t have to do everything for his sisters, and more importantly they shouldn’t want him to. When he comes home, he asks them to try doing things for themselves, something that might not have ever occured to them. I look forward to Angelo’s feminist conversion!

This week’s Arte can come off a bit preachy at times, but at the end of the day the messages it’s conveying shouldn’t be construed as special or strange, any more than Arte should be considered weird for being an apprentice. Of course, in 16th century Florence seeing a well-dressed young woman hiking up her skirt and pulling a cart full of lumber is an incredible sight because it’s such a rare one.

For Arte and pioneering women like her, there’s no blueprint for how to do this. In addition to working her ass off, Arte also has to endure the reactions of a society that has yet to embrace the idea that men and women are equal. The fact that the battle for equality is still being waged half a millennium later speaks to the sheer weight of Arte’s burden. But like the cart and the bags of clay, she’s putting her back into that ongoing fight.