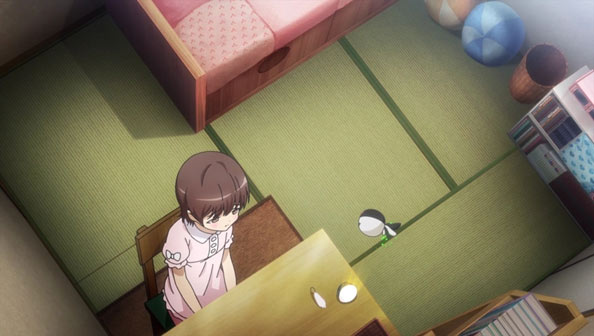 After the ordeal with Magicaloid and Hardgore Alice, Koyuki wakes up in her bed, shaken but none the worse for wear, and in possession of a rabbit’s foot, a rare item Fav says belongs to Alice. Koyuki wants to return it, but wants nothing else to do with Alice, who freaks her out royally. 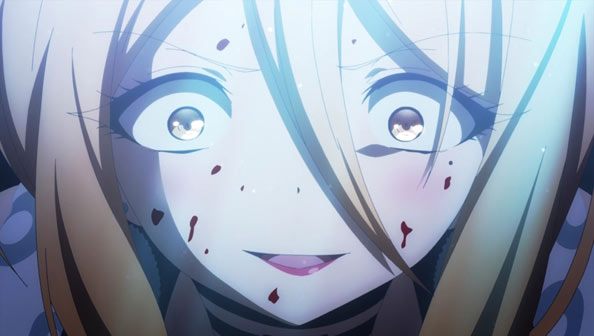 When Calamity Mary gets wind of Magicaloid’s death, she seeks out Alice, but no matter how hard she tries, she just can’t kill the bitch. Riddling her with bullet holes? Nothing. Blowing her to a bloody pulp with a shotgun, machine gun, and grenade? Nada. Chopping her gooey remains to pieces, setting them aflame, pouring acid over them, burying them in a drum full of cement and tossing it into the ocean? Absolutely no effect.

Calamity Mary has finally found an implacable adversary, and it’s uncertain whether she’s excited or simply going insane from that prospect. It is interesting, however, that by trying to take out Alice, she’s showing a kind of loyalty to her former business associate. Honor among thieves and all that. 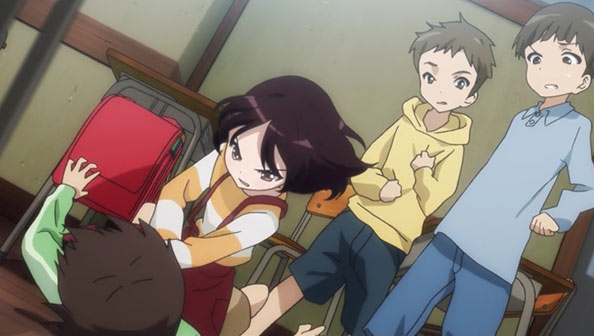 Sazanami Kano AKA Ripple is billed as a main character alongside Koyuki, and we’ve seen a bunch of her, but didn’t know quite where she was coming from until this week. Her life is presented as a series of incidents where she can’t take it anymore, lashes out physically, and ends up alone.

Granted, people say and do awful things to her that warrant a good punching, but it’s clear she’s not exactly what you’d call fulfilled. Maybe she sticks with Top Speed out of a desire to connect with someone that still endures despite all the awful experiences she’s had with people…as enduring as Hardgore Alice’s invincible Terminator body. 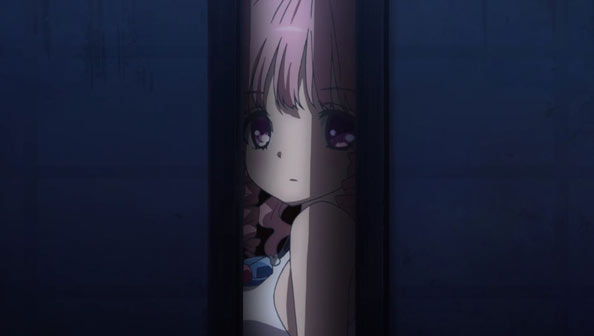 As for Alice, she confronts Koyuki, and won’t leave her alone even when she tries to run away, but while doing this makes her threatening, Alice takes no violent action against her. In fact, she’s adamant that she merely gave Koyuki her rabbit’s foot because “she felt like it.”

Maybe despite appearances she’s not someone Koyuki needs to be worried about. Swim Swim is another story, as the episode ends with her setting up an ambush for Nana and Winterprison, who are seeking unity in these troubling times.

As for Calamity Mary wanting to meet with Ripple, I’m not sure what that’s about, but surely someone has to bite the dust at some point, as there are currently more girls left than episodes. 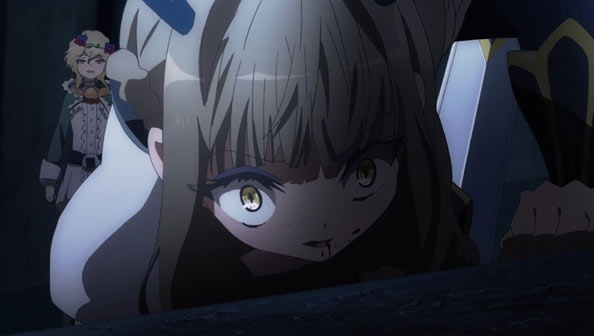 La Pucelle never had a chance. Cranberry played her like a fiddle till the end, first by rejecting his call for a “fair fight” (she’s clearly more powerful than her, able to block her sword with her bare hand), then getting him to launch one more last-ditch assault to “rid the world” of such an objectionable magical girl, only for Souta to get knocked out, tossed in the street, and run over moments after coming to. 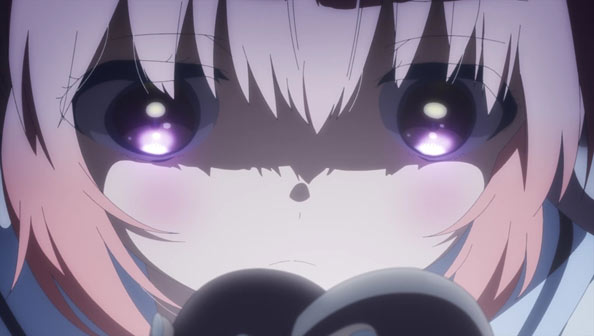 It’s a strong statement from Magical Girl Raising Project that really ups the stakes for Snow White/Koyuki. Her friend and protector is lost. She’s all alone and all-too-tempting a target, both for more aggressive girls and for Fav to try to tease some years out of her life in exchange for rare trinkets.

Koyuki’s fear of death finally leads her to hit “buy”, only for everything to be sold out; she waited too long. Now she’s in even more trouble: no more ready to fight, but without a defense against those items. The show is really piling on with Koyuki’s misfortune, further convincing me she’s the one Fav either is trying to build her up into the Ultimate Girl—or kill her trying. 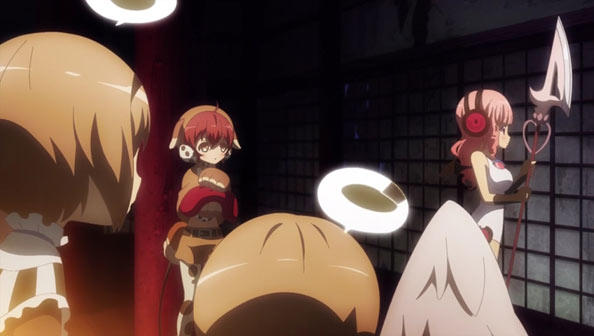 As for the items, they seem to have been snatched up by Swim Swim’s crew, with her taking on the most lifespan reduction. She wants to protect herself and the gang at all costs, even going so far as to name her weapon after the old ruler who failed them and led Swim to pick up the ball and run with it. 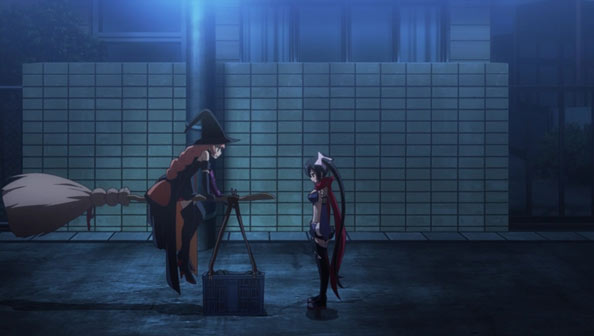 Ripple is disappointed she couldn’t acquire anything and nervous about the consequences, but Top Speed assures her they’ll be fine and that neither of them will die, based on…well, nothing but blind optimism, really. Despite her titular speed, I’m wondering how long Top Speed thinks she can stay above the fray, and how long she can keep Ripple as an ally. It seems she only needs six months. 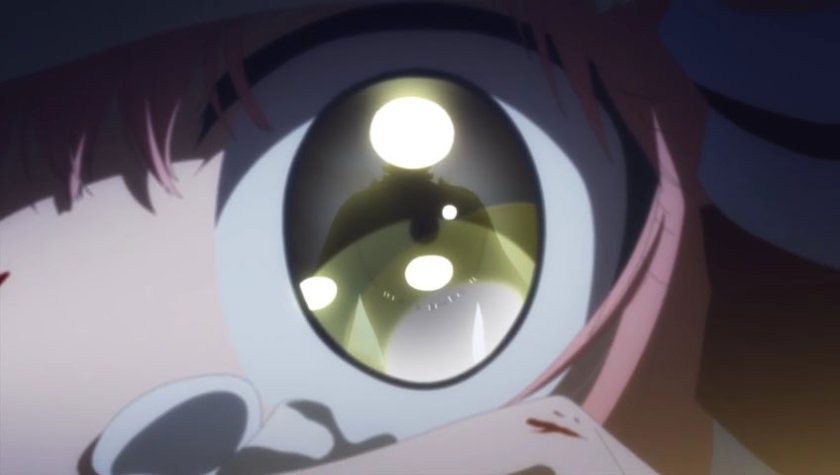 The final act of the episode is the goriest and most chaotic, with Hardgore Alice (groan) finding Koyuki and seemingly preparing to kill her, only to be beheaded by Magicaloid 44 (who was ordered by Mary to kill someone that night). For a moment, Alice seems like she was never anything more than a MacGuffin.

Then, before Magicaloid can kill Koyuki too, she is killed by a headless Alice, whose power is quick regeneration, making the quick look back to pre-magical girl Andou Makoto at the beginning of the episode seem like a too-late attempt to humanize her. As for Koyuki, she’s starting to lose it fast.