Elaina’s final trip takes her to the suspiciously foggy “Country That Makes Your Wishes Come True”. Elaina enters the country wishing to become rich, and is utterly mystified when she happens upon a landscape comprised of all of the places from her travels thus far.

Things get even stranger when she enters Mirarosé’s palace to find no less than fifteen alternate versions of herself. Some of them represent individual personality traits she possesses, while others are just random like the gel and ghoul versions.

Hondo Kaede has a blast voicing all these different one-note versions of Elaina, but I have to admit…it’s all a bit much. The intros were fun, but the gimmick wore quickly. This wasn’t one of those dreaded Recap finales, but it did borrow elements from the previous episodes, without adding much new or compelling, which gave it the sheen of a recap.

Deemed “Protagonist Me” by her intellectual version, Elaina sits down on the throne and orders the others to go out and investigate, but all of a sudden the “Violent Me” everyone else had been avoiding bursts into the palace.

Violent Me’s hair is still short from being cut by the ripper, as apparently she never emotionally recovered from the events at the town with the clock tower. All the other versions kind of hang around while the Protagonist and Violent Elainas fight to a draw (as expected). 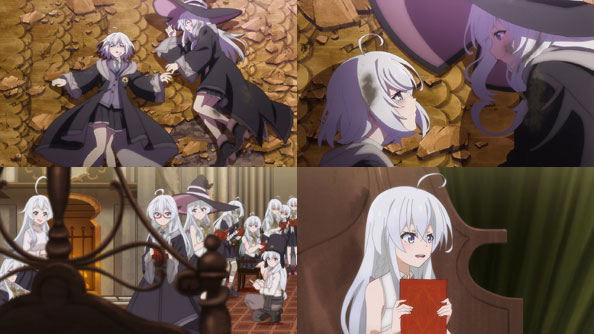 Only when both are completely exhausted of magic and can no longer fight does Elaina try to calmly discuss things with her violent self. While we heard Elaina wish to become “rich” back in the beginning, it seems the country interpreted that as becoming rich with different “experiences”.

As such, all of the versions Elaina has now encountered represent different paths and possibilities available to her on her journeys. She also believes her other selves wished for the same thing, which brought them all together to pool their stories into a single book: Wandering Witch. 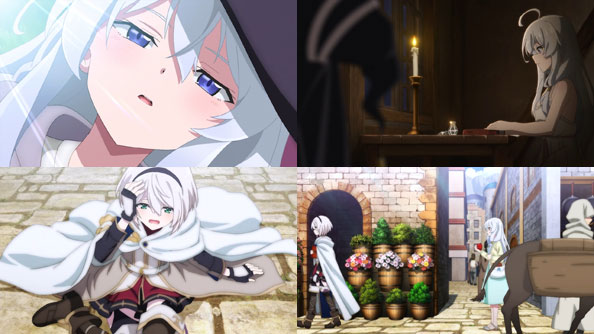 Elaina then wakes up in a meadow; the whole ordeal with her versions was just an elaborate dream. She hops back on her broom and continues her travels, cognizant of and excited for all of the possibilities and choices those travels will present.

In an epilogue that seems to preview a second cour of Elaina I’m not sure it earned, Elaina (in plain clothes) bumps into someone with similarly ashen hair but green eyes. They’re both holding red books, and when they bump into each other, those books get switched. This person’s name is apparently “Amnesia.” Um…alright then!

It’s a curious yet also fitting way to end a show that was never quite sure what it wanted to be: episodic or serialized; lighthearted and comedic or dark and dramatic. It started strongly and had a couple of powerful episodes, but that lack of decisiveness and focus in the stories it wished to tell ultimately dulled its impact.

Space Dandy is back, baby! But as Dandy himself laments in the middle of this particularly chaotic episode, they “came back too much.” After trying to pass a cow off as an alien, Scarlett gives them a stern life counseling session, suggesting they may not be cut out for alien hunting, being the worst such hunters she’s ever seen.

As they ponder a future in space trucking, Dandy pulls at a stray hair on his head, it gets longer and longer until it envelops him, Meow and QT and zaps them into another dimension, where there is another set of Dandy, Meow, and QT (and Honey), only this set is much better at their jobs. They notice another stray hair, tug at it, and the process repeats.

They’re not stray hairs, but cosmic strings, and continually tugging at them zaps the crew from one alternate universe to another, in all of which some form of Dandy & Crew exist. Those forms get more and more bizarre until we end up with a scary Meow who simply stands around grinning and holding a helmet he never wears, QT as an old codger who thinks he’s a robot, and a gloomy Dandy who just wants to die, having clearly been around the other two for far too long.

With all the alternate Dandy crews springing up in one universe, not only does the Aloha Oe get overstuffed with people, but the universe itself starts to become full of contradictory information, to the point where even the normally unflappable narrator begins bickering with other narrators over what exactly is going on in the episode. If this goes on it can’t end well.

So the Dandys and their crews come together and decide to light the cosmic strings like fuses. When that happens, a big explosion occurs and the universe is seemingly back to normal, until it’s dropped on us that Gloomy Dandy and his two insufferably strange companions are the new cast moving forward. The show is just joking, but in the end, Scarlett was wrong about the Dandy, Meow, and QT she knew being the worst. There’s always worse.

The heroine finds herself in a new world where Ikku is her boyfriend. Rumors fly around that he treats dating like a game and has dumped all his previous conquests three months after meeting them. However, according to Kent, he has not yet done so with her. Orion reappears but promptly disappears, just before she is able to tell her what exactly is going on.

We’re starting to think the heroine’s encounter with Orion now has her bouncing between universes. Whenever some time passes and she is able to gather information about the universe she’s in, boom, she wakes up back on August 1, in a totally different universe. Well, a slightly different one, at least. It’s all about the details: most importantly, whom she’s dating.

While it’s eventually made clear Ikku and the heroine are a couple, because we know that she doesn’t remember (or is from a universe where they aren’t a couple) there’s a bit of a creeper factor to Ikku. It’s as if the series is relishing putting the poor unwitting heroine in the middle of these relationships with fairly aggressive men who wear the same weird clothes every day, have no notion of personal space, and play nerdy math games.

Of course, the heroine keeps going with the flow. Why bother learning more about where she is if you’re just going to end up somewhere else a couple days later?

Renton tells Ao and Pied Piper about how the Scub Coral used quartz to travel across parallel universes, but when they approached Earth, were attacked by the Secrets. The Scub Coral traveled to Earth’s past to escape, but to no avail, and Scub Bursts were born. Renton believes it’s his duty to restore the natural timeline by destroying the first coral, even if it means sacrificing himself and Eureka. Ao disagrees, flies into the pole light, and goes back ten years to when Eureka became quartz to protect him. Renton follows, and the two are reunited. Ao tells them to flee, and stays behind to fire the quartz gun once more. Having saved his parents and secured their happiness, he wanders time and space for a time, returning to Iwato Island in 2027.

This final episode had a lot to say do and no extended amount of time to do it (save abstaining from an OP), and while at times it struggled under the weight of its own convoluted explanations and convictions, it handled the task quite well. The series amounts to a jigsaw, the peripheral pieces of which had been set into place in a scatter-shot manner, always holding back till the end, which was this. The final pieces, the ones that bring the whole picture together, were set down. Now that we can see the picture clearly, the series could just as well have been titled Eureka Seven AI. “Ai” as in Love. Love brought Ao into the world and his parents’ love protected him.

Ultimately his love for them drove his decision to repay them for giving him life and preserving it by saving his mom and making sure she reunited with his dad. Despite growing up without either of them in his life until then, he turned out to be a pretty grateful kid. And we really can’t criticize his sentiment; he quite literally wouldn’t exist without them. The love they had for each other, then, was the real truth of this whole series. As for Truth, the guy? Yeah, he was an evil villain in one universe, but a Nirvash archetype in another. Go figure! Fleur, Elena, and Naru? They kinda get hosed in this episode. When an older, longer-haired Ao arrives at the post-quartz world of 2027, we unfortunately don’t get to see them, or how they might have changed. A wrap-up montage would have been nice.