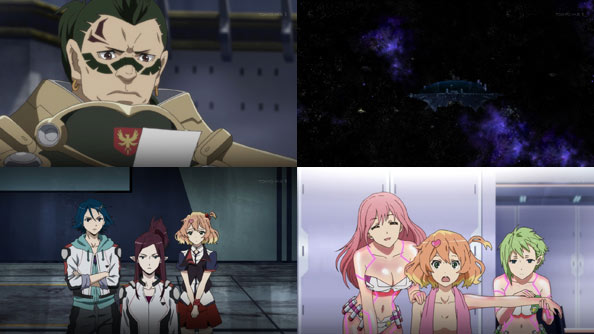 Well, with a big battle coming up and the show deciding to check in once more on Cassim, it was pretty clear from the cold open that this was going to be the swan song for, to date, the most three-dimensional Windermeran on the show.

But first, a note about the shot that establishes the Chaos fleet the last two episodes: could it have killed them to zoom in a little more and let us get a nice look at that fleet? It’s a nitpick that expresses my desire for a big space/aerial battle after a string of episodes that were more about developing characters. And we got one. 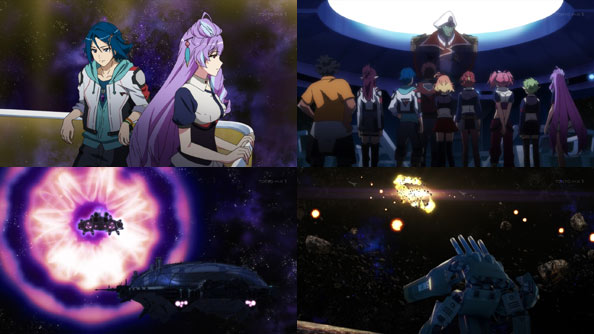 After a quick chat between two of the simpler characters in Macross, Mikumo (who lives to sing) and Hayate (who lives to fly), everyone salutes Captain Johnson and the Elysion enters a fold gate. All of a sudden, we’re back in the shit, as Chaos teams up with the liberated Vordorian military to strike against Randall. 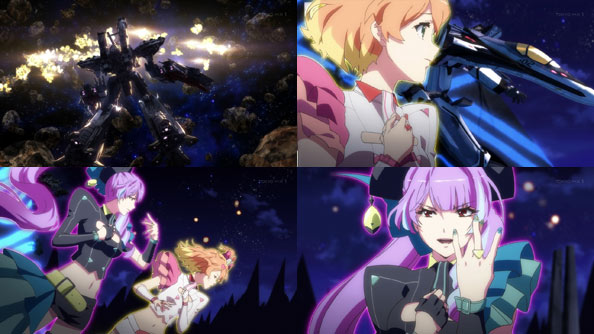 But that turns out to be only a means of diverting and splitting Lloyd’s forces, as Delta and Walkure’s true desination is Windermere itself, by way of a fold gate opened on Alfheim. The only way to open that gate is for Walkure to give the protoculture structure everything they have.

At first, Freyja doesn’t do that, because she’s still scared Hayate and/or Mirage will go nuts. But after a quick slap by Mikumo, combined with the urgings of Hayate and Mirage, Freyja is back in the game. 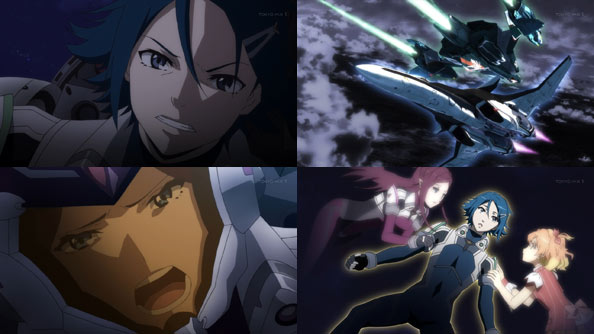 Turns out she was right to worry: the song does make Hayate go berserk, just when locked in a dogfight with Cassim (who is fighting like this is his last battle, because it is). Just as Hayate and Mirage helped snap Freyja out of her funk, Mirage and Freyja snap Hayate out of his Var before irreparable damage is done, and the battle resumes. 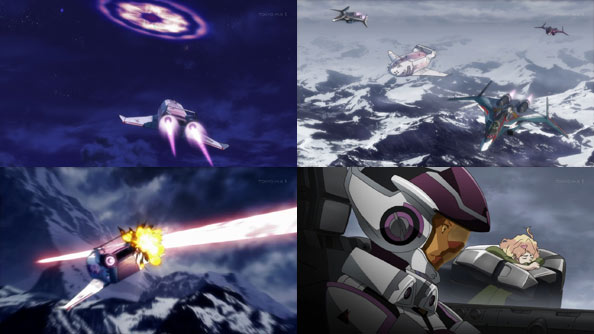 By the time Hayate has his senses back, the platoon has bought Walkure adequate time, the gate opens, and they fly through, emerging in Windermere’s atmo. Two Aerial Knights: one of the twins and Cassim, follow, and take out Walkure’s shuttle.

Remembering vividly what happened to Flay in Gundam SEED I naturally worried about the idols’ transport getting hit, but they all survive the attack, with Arad and Mirage catching Kaname and Freyja out of the sky. 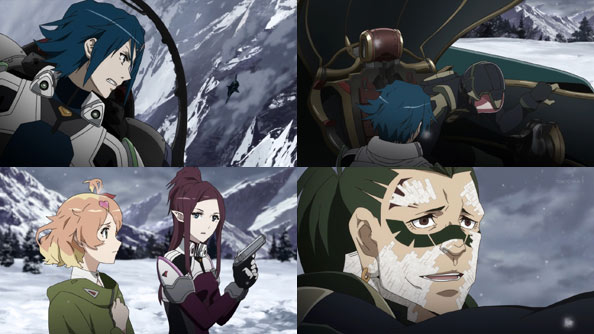 All that’s left is for Hayate to stay alive long enough for Cassim to burn (or freeze) out, which is what happens. Interestingly, no other Windermerean defense is around, allowing Hayate and Mirage to land their planes so they, along with Freyja, can pay respect to their fallen adversary and acquaintance.

Cassim’s time may be up, but Hayate, Freyja, and Mirage’s Windermerean adventure has just begun. Freyja is finally home. There’s still quite a bit left to do, and Lloyd probably isn’t going to roll over and let them destroy his life’s work. We’ll see whose wind prevails.

Kirito and Leafa arrive at the meeting place just in time to stop the Salamanders. Kirito claims to be an ambassador for the “Spriggan-Undine Alliance” that will join with the Sylphs and Cait Siths if the Salamanders attack, but General Eugene doesn’t believe him, and challenges him to a duel. Using his Spriggan skills to create an occluding smoke cloud, Kirito grabs Leafa’s sword and surprises Eugene with a dual-wielding attack. Sakuya heals Eugene, who agrees to withdraw for now. Sakuya contacts Sigurn and banishes him from the Sylph. Kirito and Leafa continue to Arun. High up in the World Tree, Asuna enters the correct key code on the door and escapes, but must now navigate the tree’s maze of branches.

Is it just us, or is Kirito growing more insuffrably noble by the episode? He dispatches one of the (if not the) most powerful players in the game with authority, and is then clung to and yanked on by no less than three comely lasses, because Kirito is like a heroin-catnip parfait for the ladies. It’s a good thing this is all taking place in virtual reality. In any case, Kirito’s fight convinces both the leader of the Salamander attack force and his men to withdraw and they all gain respect for the Spriggans, whom everyone seems to hold in high regard (isn’t that racist, BTW?)

Now that Kirito has dealt relatively easily with a problem Leafa thought would be much bigger and more hazardous, they can continue on to the base of the World Tree, where Kirito seeks to rescue his true love – and he ain’t even gonna give all these other floozies the time of day. And with Asuna escaping her cell (which we hope wasn’t intentional on Oberon’s part so as to mess with her, though we wouldn’t put it past him), it looks like Kirito isn’t far from facing off against Foe Numero Uno. The issue of Sugu/Leafa and Kazuto/Kirito not knowing each others’ real-life identities, seems to have been shelved for now. Maybe they’ll never know.