Miou becomes a monk and the club gets abused by a sadist Buddhist monk, who turns out to be a con-man after Miou’s money; Urara hides on the ledge outside the 4th floor bathroom window and refuses rescue because she broke the toilet and was unable to flush her donkey turd away, and Momoka does battle with her inner demon and angels over stealing a valuable air soft gun. 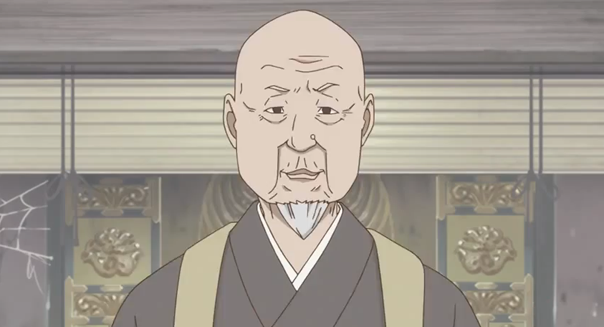 Miou’s decision to jump into Buddhism is probably the weakest of the three arcs. It was kinda funny to see the Monk so blatantly enjoying smacking anyone who moved—to the point that he and Momoka start pestering the other club members in order to get them to move—and it was great to reveal that he was just a con man at the end of the arc but it was fairly one note. In the key of Thwack! 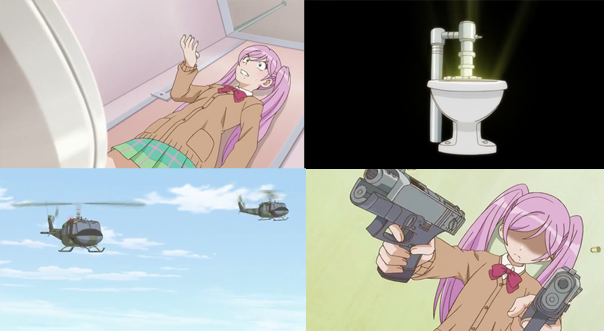 The gist: Urara breaks the toilet handle before she can flush and, to her horror, friends come to her rescue. Driven out the window in shame, she only draws more attention, which culminates in Miou calling in air cavalry to Urara’s rescue.

This results in helicopters being shot down, and a mournful salute to six soldiers/pilots we’ve never even been introduced to. It’s fantastic and requires no previous understanding of the show to get into (I don’t think anyway) and is worth a nervous peek if you’re curious.

The final arc pits Momoka against her inner good and evil, which are presented as typical angel/devil girls in skimpy clothing, plus side arms. It’s a good little piece, but kinda out of left field since Momoka hasn’t been presented as having sticky fingers before but there are plenty of gags to be had. My personal favorite is pictured above. (love the idea of throwing an airsoft gun on a pottery wheel)

Even by Sabagebu!’s standards for random and bonkers, this week was RANDOM AND BONKERS…In a good way!