It’s a scary time for a lot of people across the world with the outbreak of the Coronavirus, so it’s somewhat inauspiciously coincidental for IQ2 to come out with an episode in which everyone gets a physical. This physical only seems to consist of taking the students’ height and weight, with no injections or other health tests taken.

What this episode does test is my patience with Pandora’s Actor. In the shadow of fellow Miyano Mamoru-voiced character Betelgeuse, PA’s quirkiness seems forced. He’s random and crazy enough to be annoying, but not enough to be fun to watch. Ram seems to agree.

As for the parties who strive to see members of the opposite sex in their skivvies, Rem prevents Shalltear and Albedo from glimpsing too many of Ainz’s bones, while the normally super-lucky Kazuma is a hair too late in initiating his peeping mission.

Speaking of hair, the prominent ahoge of both Tanya and Filo prevent Wiz from taking accurate height measurements, while Darkness is the only girl disappointed that neither Kazuma nor any other men decided to peep on them. The excessive Pandora’s Actor marred some otherwise funny moments in an unfocused outing.

The next morning, it’s No More Mrs. Nice Fitoria. She binds Melty in a wind prison and demands once more for Naofumi to make up with the other heroes. When he refuses, she once again threatens to kill all four heroes, but first gives his party the chance to prove they can take on the waves on their own. She’ll determine this by fighting Filo. 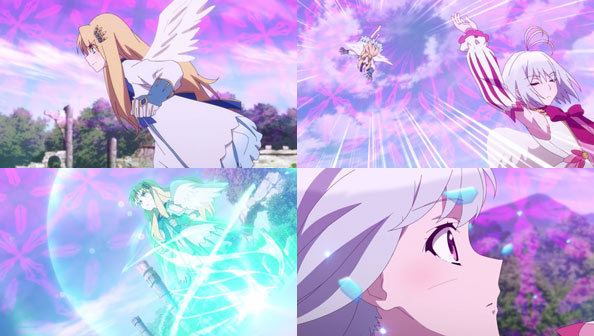 As expected, the spirited but woefully under-leveled Filo is absolutely no match for Fitoria…at first. But with continual pointers and encouragement from Naofumi, Filo keeps getting back up dusting herself off, and trying again. Eventually, she’s able to summon enough power to literally put a scratch on Fitoria’s face. That’s enough to satisfy the queen: Filo wins.

Not only that, but Fitoria names Filo her official successor, conjuring a crown to place on Filo’s head, which is replaced by an ahoge of which Filo very much not a fan. She opens a new Filolial-themed section of Naofumi’s sphere grid—albeit all shields he’s of too low a level to access—and increases Filo’s stats (though she still can’t break Level 40 quite yet).

She also apologizes to Melty by giving her a ride in her giant filolial form (of which I wish we could have seen more), and throws a huge party. Throughout these events, and the episode itself, Kevin Penkin’s marvelous score really asserts itself, elevating the images on the screen. This show’s music is just a pure joy to listen to. 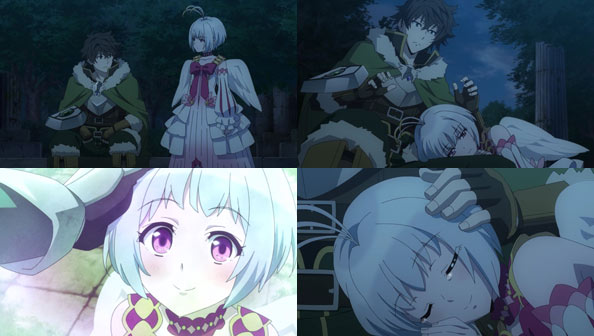 Once the festivities have wound down and everyone else is asleep, Naofumi finds himself in a similar situation as the previous night: alone with a Fitoria committed to getting him to reconsider his hard stance on not playing nice with the other heroes, which she actually manages to achieve when she points out that his refusal to defend himself against Malty’s lies is as saying the lies are true.

While Fitoria doesn’t have the best memory, on two occasions Naofumi says something her hero once said to her, and the nostalgia leads to her tearing up and placing her head in his lap to be patted. The reason Fitoria works so hard to make Naofumi repair his reputation and relationship to the other heroes goes beyond the fate of the world: she knows he’s a good man by dint of raising the next Filolial Queen. It’s time the rest of the world knew it.

As for those other heroes, both Sword and Bow enter a cave seeking some kind of treasure, only for it to be a trap that incinerates the entire cave. I highly doubt they didn’t survive, though it’s not like I’d care if they didn’t…