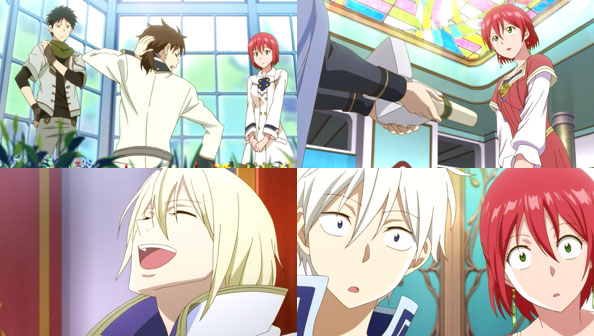 Finally…a show that actually uses the word “fin” to end its run! Long story short: there’s no time jump and no marriage between Zen and Shirayuki. Instead, the road is paved and made smooth for such an eventuality down the road.

But that’s okay; a finite storybook ending would have run counter to the show’s M.O. to date: not leading us to the Happily Ever After, but the Happy Now, the part between Shirayuki and Zen first meeting and their marriage, a space that has contained multitudes of stories big and small. 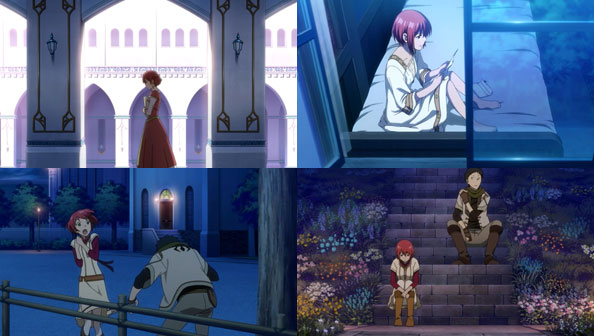 When messengers from Tanbarun (Sakaki and Mihaya) arrive to present Shirayuki to bestow the tile of “Friend of the Crown” on behalf of Prince Raj, Izana can’t help but laugh at the strangeness, but I get the feeling with him it’s always better to be surprised and amused than bored or disappointed.

The fact another prince would go to such lengths to legitimize his friendship to Shirayuki provides more evidence to Izana that Shirayuki isn’t the “nobody” he worried would sully Zen’s name and station. The thing is, Shirayuki, like her new title, doesn’t fit in with everything that’s come before. Izana isn’t threatened by that potential for disruption; he’s intrigued.

After reading Raj’s cordial letter and being unable to sleep, Shirayuki walks the stately yet serene grounds of the castle (impressive architecture has always been one of this show’s many strong suits) and bumps into Obi, who’s known her long enough to know what she wants.

He fetches Zen for her, and the two share one of their steamier scenes together, as their kissing makes Shirayuki literally weak at the knees and unable to stand. That’s of no consequence, however, as Zen is happy to carry her to the highest, most private vantage point in the castle.

There, nobody officially proposes, but as I said, the bricks of the road to that outcome are fully laid and mortared for smooth travel. Shirayuki expresses her desire to remain by Zen’s side (indeed, asks if it’s really okay to do so), and Zen replies most emphatically in the affirmative.

Again, it’s not quite a proposal, or even an engagement, but these two aren’t quite doing things the usual way things are done in their world…and aren’t in a hurry to let conventions oppress them at this point. For now, they’ll keep on keeping on: Zen with his princely duties, Shirayuki with her court herbalism.

On this path of her choosing Shirayuki will continue to walk, with Zen and all her other friends by her side supporting her and being supported by her. When the times comes to do something official about the love she and Zen have for one another, they’ll surely know. 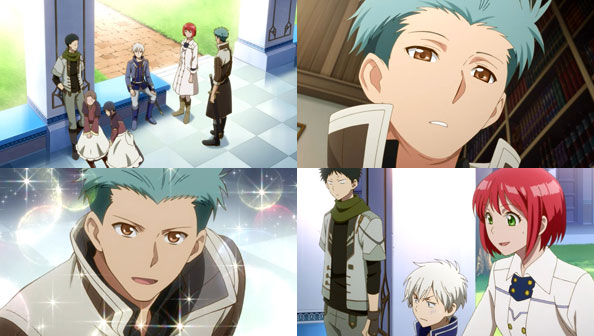 Shirayuki has fully settled back into it’s ‘Palace Groove’ with this particularly laid-back, playful and at times goofy episode, which starts with new maid drops a carpet on a lost-in-thought Zen, mildly injuring his neck.

While looking for Garack in the Herbalists’ office, Mitsu knocks over a strange potion that has a hypnotic effect, turning the normally down-to-earth Mitsu into a hyper-loyal, rigid, dashing, doting pain-in-the-ass of an attendant.

Oh yeah, Shirayuki gets Zen’s shirt off…but hold your horses, she’s just applying a balm for his neck. As for Mitsu, his unusually charming behavior utterly fails to charm Kiki, but her slap doesn’t snap him out of it, or out of saying things like he loves Zen.

Zen gets irritated easily with this Mitsu, and it’s primarily because the two already went through this phase in their relationship, where Mitsu acted too over-protectively and spoke more formally to his prince. Zen wants the old Mitsu—the one their years together turned from a glorified bodyguard to a dear friend and brother.

Shirayuki, wanting to lend her strength to Zen the way Mitsu, Kiki and Obi do, works furiously to devise a cure to the hypnotic state after healing Zen’s neck. After some long nights in the library (during one of which Zen visits and the two end up too close for comfort) and a little help from the light of the full moon, she concocts an effective antidote.

But while she thought was simply preparing a medicine for her friend in her spare time, it turns out the proper treatment and reporting on Mitsu’s case was the final test Shirayuki needed to pass to be promoted to full court herbalist. She passes with flying colors, and she can scratch another dream to achieve off her list.

The next one is far bigger: marrying Zen. Could it happen, or at least progress further on the road to it happening, in the next and final episode of Shirayuki Season Two? Or was the leisurely pace and content of this episode an indication there will be a third? We’ll find out in five days.