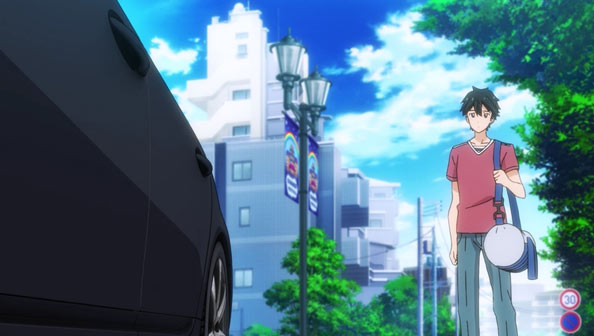 Whether due to her suspicions about him going to Neko’s place, or the fact that Neko being missing takes precedence, Aki completely ignores the fact Masamune said he “chose” her and rejected Neko. The girls (and Kojuurou) pile into the car to go look for Neko, and there isn’t room for him.

And yet, after nothing comes of searching the immediate vicinity of Neko’s apartment, Masamune and Aki both end up at school. There, Aki tells Masamune she doesn’t want Neko wallowing in despair. She feels bad that he rejected her…which is pretty rich, considering she did the same thing to Masamune years back, which leads him to bring up “pig’s foot” to her.

That conversation is curtailed by the re-enactment of a scene in the manga Masamune owns which Neko also started reading, in which a girl turns her unrequited love letters into paper airplanes. Only when they finds her on the roof, it isn’t long before she collapses from exhaustion. Clearly Neko is frailer than Masamune ever imagined. 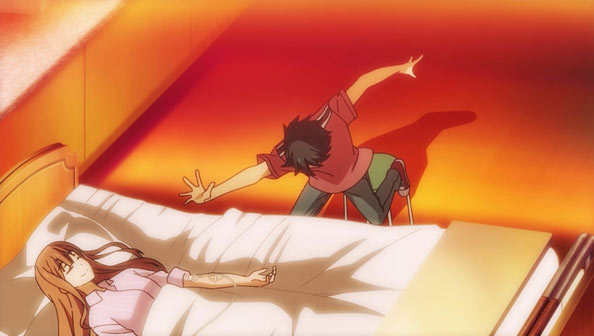 While recovering in hospital, Neko asks to speak to Aki alone. After that, she has Masamune brought in to talk to him alone, and reveals her plan to him to fall in love before undergoing a risky operation that could improve her condition (or not).

She says he was chosen at random to be her suitor, but a later flashback indicates the two did meet little kids, and were thought by his family to be a good match. Alas, Masamune only ever had feelings for Aki. She thanks him for giving her “lovely memories,” then excuses him.

Neko’s talk with Masamune about not walking the “same path” as her through an uncertain fog, and he redoubles his efforts to block out “unnecessary thoughts” and recommit himself to his goal: to make Aki fall for him and then “throw her away in the best way possible.” He’s not thinking about what happens after.

We thankfully also get Neko’s frank talk with Aki. Neko was soundly rejected, so now she sees no good reason why Aki should keep acting tough and denying the love Masamune has for her.

Neko is conceding defeat, and Aki can’t dance around the fact that she feels something…but interestingly, she thinks back to the fat Masamune of her childhood as her ideal of love. After all, Masamune has only showed us his version of their relationship. It’s not a great leap to assume she teased him because she liked him…he was just to thick to realize that.

As for what happens in the end, with a fat little guy who looks like Masamune showing up in Aki’s garden…I don’t know what to think. Did she fall asleep beside the fountain and is simply dreaming? Or is she mistaking this random kid for the real Masamune?

It was a very bizarre and confusing—if mildly intriguing—way to end another solid, earnest, emotional episode. 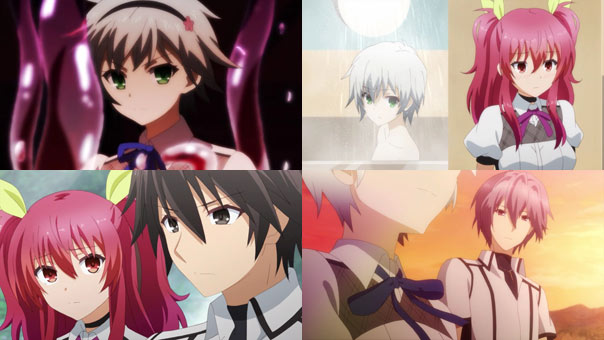 There are no further developments in Ikki and Stella’s sex life this week, as Todou Touka’s brisk and powerful introduction late last week segues into her battle against Shizuku, who has worked to become strong so that she can provide all the love for Ikki the rest of the Kuroganes refuse to provide. While she doesn’t have to worry about Touka’s opposing element (due to her ability to produce ultrapure water), this will still be her toughest opponent yet, and she’s at least somewhat nervous.

I do like how Stella reaches out to Shizuku and the two don’t snipe at all, but simply have a normal conversation. Stella’s concern on Ikki’s behalf is acknowledged by Shizuku, rather than shunned. But Shizuku thinks Ikki is worried because she’s not strong enough and might hurt herself. This battle is the ultimate opportunity to show him the full measure of the strength and resolve she’s amassed for him.

After a lot of keeping their distance and waiting for the other to strike, Shizuku finally starts with a ranged attack, and both battle and episode take on a furious pace, as befits such a high-level battle. The crowd is immediately impressed with the magical skill on display and how evenly matched Shizuku and Touka seem to be. Even when we think Touka lands a killing blow, it’s only a “water shadow.” 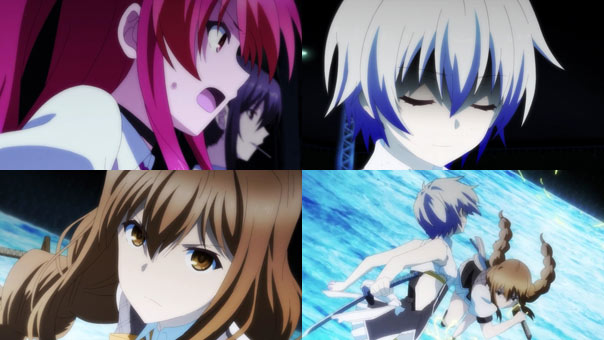 But Touka draws first blood, and then uses the mysterious art of Nukiashi to “hide under” Shizuku’s unconscious, making her miss her movements, like a slight of hand. This gets Shizuku into dire straights, but like she did with Ikki, Stella manages to snap her out of it by cheering her on. Unlike Ikki, Shizuku doesn’t like “that woman” cheering for her one bit, but is thankful to have been roused from her temporary funk. 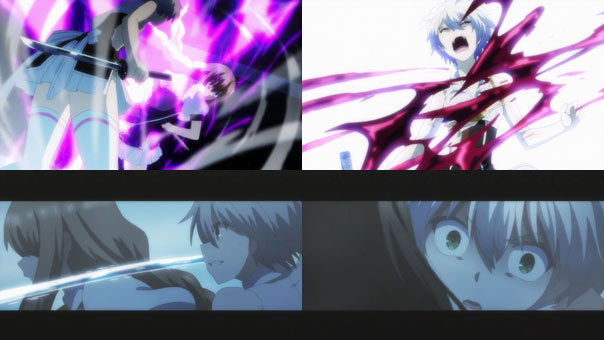 From there, the battle is taken up a notch, with the names of moves being announced but no more time to explain what they are. The battle proceeds to show, not tell, and it shows a lot. The battle’s second act is tremendously awesome, but it ultimately ends how I thought it would, with Shizuku drawing too close to Touka and falling for her trump card, Raikiri, a move that has yet to be overcome. The final moments of the battle take on a very cinematic quality, complete with letterboxing and subtler lighting.

The immense, fog-shrouded winter wonderland Shizuku created is dissolved in an instant, and Shizuku falls, but not because she tried a reckless suicide move in a last-ditch effort to defeat Touka. Ikki saw that Shizuku made the best move she could have made…it just wasn’t enough. Which means in all likelihood that unless Touka had a particularly unlucky day, Shizuku was never going to be able to beat her.

Shizuku is very sore about it when she wakes up in the hospital, unable to face Ikki and wanting to simply be alone. Only Alice remains, to give her the hug she knows she needs, so she can drop the armor and let everything out she was repressing in order to act cool for her brother and Stella. And as Alice tells her, it doesn’t matter whether she lost the battle: her brother watched every minute with pride and love.

Shizuku may not know it yet, but proved all she needed to prove to him in that battle. And that turns out to be not much, because even if she was a terrible fighter, or a complete weakling, Ikki would still love her. That’s what real family is.