Citing that France is second only to Japan in cosplay popularity, Chika insists the StuCo welcome their new French exchange students while cosplaying. But when Kaguya and Miyuki put on cat ears, neither of them can resist smiling at the intolerable cuteness of the other.

Regardless, both don’t want the other knowing they find them cute, so they try to tough it out by grotesquely contorting their expressions in a futile effort to hide their mutual delight. To an outside observer like Chika, this looks like they’re glaring at each other with looks that could kill. Loser? Chika…for once!

The StuCo must organize a welcome party for the French, and two of them are needed to do all the necessary shopping, so Chika suggests the two losers of a “banned word” game will do the honors. This is a case of both Kaguya and Miyuki actually wanting to go shopping together, so it behooves them to let Chika win.

That suits Chika just fine, since she wants to win and pulls out all the stops to do so, demonstrating that while the Prez and Veep might look down on her as a second-rate intellect and airhead, she can more than handle herself in a banned-word game. She switches up her manner of speaking by rapping, and has the perfect words she knows Kaguya and Miyuki will readily say if properly stimulated: “love”, and “serious”, respectively.

With Kaguya and Miyuki both losing, their shopping date is set; they just have to agree when and where to meet, which requires one of them text the other for the first time. Kaguya’s maid (and audience surrogate) is somewhat exhausted by her charge’s beating around the bush (as are we all!) so she puts Kaguya in a corner by calling Miyuki then tossing the phone to her.

Miyuki’s extremely stern-sounding father answers, and eventually hands the phone over to his son, who is in the bathtub but doesn’t mind talking since his phone is waterproof. Once they’re talking, the tension fades away, but Kaguya makes the mistake of hanging up when Miyuki was in the middle of saying something else.

Kaguya curses herself while kicking in bed, but the result of her error is that Miyuki ends up being the one to text her first, telling her to stay warm and have a good night. Winner: Kaguya. Unfortunately, it pours so hard Shibuya Station floods, and the shopping trip is cancelled before it can begin. Still, Kaguya’s instinct to go regardless was correct: Miyuki was waiting for her, in the rain, by Hachiko…with his waterproof phone.

Thankfully, Miyuki doesn’t catch cold just in time for the French exchange students’ welcome party, so we get to watch him try to bluff about speaking French when he only skimmed a guidebook. Meanwhile, Kaguya merely pretended not to know French, only to turn around and speak fluently with one of the students. Even Chika, daughter of a diplomat, speaks French and other languages. Just full of surprises!

Little does Miyuki know the headmaster intended the party to be an important test to determine whether he’s truly worthy of leading the school. Betsy, the French StuCo veep and notoriously foul-mouthed master of verbal invective is sicced on Miyuki, and she proceeds to absolutely enrobe him in nasty French insults. Since Miyuki doesn’t speak a lick of French, it all bounces off!

The thing that isolated him ends up convincing the headmaster he does have what it takes, by enduring everything Betsy could through at him with placid “oui, ouis” in response. Even better, when Kaguya overhears Betsy, she comes to Miyuki’s defense, all while showing Betsy is no match for a properly scary Japanese high school girl.

Once the party has ended, Kaguya is ashamed of her nasty word-using, but Miyuki reminds her, he doesn’t speak French, so he didn’t hear any particulars of what she said. All he knows is she didn’t like how Betsy was talking to him, and fought on his behalf. For that, she has his gratitude. And so the episode closes with a win for both Kaguya and Miyuki. 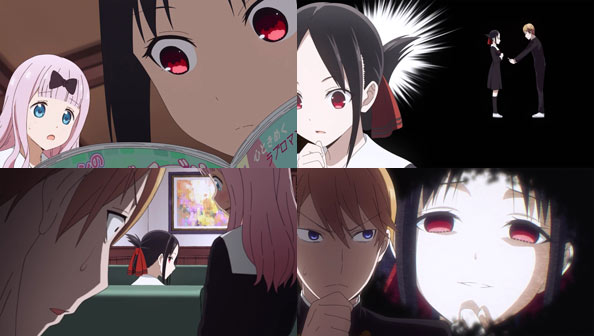 When inappropriate literature is confiscated by the headmaster and given to Miyuki to dispose of, Chika takes one look and is scandalized, emphatically challenging fact about 1 in 3 high schoolers having “done it.” That means 1 in three in that very room could have already had an “experience”.

It’s Kaguya who comes right out and said she’s had one, shocking Chika and Miyuki and putting the latter in a bind: if asked if he’s done it, he knows Kaguya will sniff out a lie and likely respond with a devastating “that’s cute.”

Miyuki is defined by being extremely well-liked by the opposite sex (he’s even been given homemade chocolate…full of hair?!?) but utterly inexperienced with same (not counting his non-romantic interactions with Kaguya and Chika). Boundless confidence and pure chastity are a weird combo, but they take a back seat to Kaguya’s situation.

You see, Miyuki is bailed out from having to answer whether he’s “done it” after Kaguya says several things that paint the picture of an extremely perverse upbringing, having “done it” with a “newborn on videotape” and assuming Chika’s “done it” with her dog many times.

He finally asks Kaguya what she thinks “doing it” refers to, and she replies that it means “kissing.” It’s an answer someone who’s been boxed up and protected from any and all sexual education for all of her sixteen years. When Chika finally explains what “doing it” really means (a 15-minute process!), her faces says it all: she’s lost this round.

In the middle segment Miyuki notes how much Kaguya has mellowed, and how in the half-year they’ve worked together he’s come to understand her better. She decides to put him to the test with a game of “20 Questions”, only he limits him to just ten, since he claims to know her so well.

She writes something on a piece of paper, and he’ll have ten questions to figure out what it is. Miyuki is game, while Kaguya senses an opportunity.

Her “yes” and “no” questions take a turn when Miyuki asks “is it something you like” and she suddenly gets all bashful and flustered. He comes to think the thing she wrote down was him, as all the responses fit that conclusion so far.

Miyuki himself is so flustered by the end of the sequence, he blows his ninth question by providing a non-yes/no query. But after thinking about it more (or rather thinking about the other side of Kaguya he knows; the one that plots) He eventually guesses “dog”, and he’s correct.

Kaguya was probably trying to lead him to reveal his feelings by getting him to suggest she was talking about him, but he doesn’t go for it, and in the process proves that he indeed understands her. A win for Miyuki!

The rubber match…isn’t even a match between Kaguya and Miyuki, and Chika’s not even in the sequence. Intead, with a cat holed up in the engine compartment of the car that drives her to school, she decides to walk to school for the very first time, having watched other kids do it thousands of times from the car window.

It’s a beautiful sequence that underscores just how rare an experience this is for the sheltered princess, and knowing Miyuki’s bike route, attempts to “surreptitiously” cross paths so he’ll give her a ride to school. Her plan is seemingly foiled by a crying, scared middle schooler who can’t cross the street without a buddy.

As Kaguya stays with her for all the crosswalks that lead to her school, she learns that like she herself, this girl doesn’t want to walk alone. When Kaguya suggests she just arrange to walk with her friend, independent of official group walking, the girl labels her a genius before meeting up with her friend (who has the colorful nickname “Yeti”). 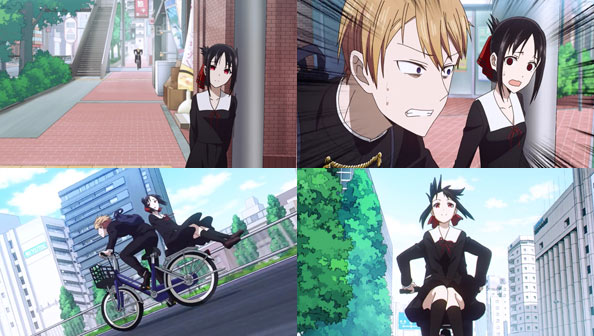 At this point, Kaguya knows she’ll be late to school, but as she’s coming to terms with that, the crossing sign flashes “stop” and none other than Miyuki screeches to a halt on his bike right beside her. After he gets over the shock of Kaguya being there, he instructs her to get on and ride with him, as it would be a black mark for the StuCo if she were late.

There’s no hesitation or embarrassment in what Miyuki does, and he even puts school rules ahead of traffic rules prohibiting two people on a bike. Logic is on Kaguya’s side today, and you can sense her joy as she rides with the furiously pedaling Miyuki, keeping her skirt down, her hair flowing in the wind.

Even though the next day she’s back in the car, she’ll always look fondly at the one exciting day she set out on foot and got picked up by the boy she likes. Kaguya wins without anyone losing—a marvelous example of the show balancing its usual cynicism with lovely, joyful segments like this.