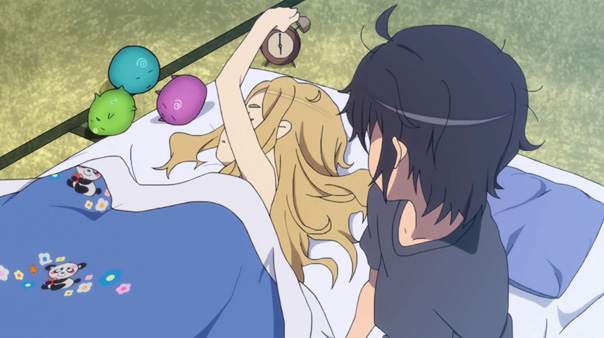 Like every far-flung, wacky Zvezda adventure Jimon Asuta has ended up on, this latest one has a very modest, innocent start: he cooks Roboko’s typically raw udo. That becomes a much bigger deal than he thought because A.), Roboko only eats raw udo; B.), raw udo is Roboko’s sole energy source, and C.), that was the last of the udo in the kitchen. When he heads down to the basement (50m underground) he finds a huge growth of udo (looking very similar to the core of Laputa, by the way) and learns that the entire Zvezda HQ runs on the stuff. But something’s no right: the udo starts to die, and all the lights go out. Adventure time!

It’s the ease and deftness with which Zvezda snowballs little incidents that makes it such a fun show to watch; like Space Dandy, it keeps you on your toes, not knowing quite what’s going to be on the menu from week to week. This also makes sense, as Zvezda is commanded by a little girl who can be fickle, impulsive, and just downright random, and also needs afternoon naps. This week the mission to find the original udo is undertaken by Asuta, Kate, and Natasha, about whom we learn a lot more. Last week we got Gorou and Yasu’s story, but Natasha’s story gets a lot more texture and depth, as the trio descends further into the “Super Ancient Udogawa Civilization.”

What also gets a lot of texture and depth is the vast, crazy underground setting itself; from Natasha’s little 8-bit locator device to the montage of RPG-like battles and events to the alien look of the place, it’s definitely a pleasing change of scenery full of neat little details. There’s a great sense of occasion and grandeur to the journey, which for Natasha becomes a journey to her past, which she must confront in order to complete the mission. While her childhood story starts out relatively normal—she reclusive child who spent her waking hours building robots—it takes a bizarrely intriguing (and very apropos for Natasha) twist.

The foray into the past starts with a dream that Natasha has while sleepwalking into Asuta’s bed. Natasha isn’t quite clear about it, but she either ran away from home, like Asuta, when her parents insisted she stop inventing, or they weren’t her parents at all and took her to the “land of the faeries”—Ancient Udogawa. In any case, she was alone and lost—and then she wasn’t—when she met Roboko and then Kate, to whom she swore fealty. It’s fitting then that Roboko saves her again from the dark, shadowy echoes of her past, giving Kate and Asuta time to pollinate the Udo. Any charges of a deus ex machina are negated by this simple fact: Roboko could eat cooked Udo all along; she just hadn’t gathered the courage to try it.

First, a confession: we’re not tobacco smokers; never have been. They just didn’t agree with us, unless we were very drunk, and even then, we paid a price the next day. That being said, we’ve always been very accepting of smokers’ right to smoke. We once lived with three smokers at once. When laws banned smoking in most bars, we felt like the bars lost their ambiance. And of course, we grew up seeing heros and villains alike enjoying a good smoke, and usually looking pretty cool while doing so.

Kate and Natasha aren’t like us. They’re not willing to live and let live with smokers. With them it’s Zero Tolerance Total Ban with no quarter for those who transgress, even their own comrade, Yasu, who has a history of misbehavior. We learn that he and Gorou were once gangsters who were in a tight spot and were saved by Kate; they apparently joined Zvezda not long after that. Gorou maintained a healthy fear of Kate’s power when she’s serious; a power we see as she battles the smokers of West Edogawa.

Kate also possesses tremendous charisma and is able to rally previously scared and frustrated masses of fellow non-smoking residents into a fearsome army of “Smoke Busters.” Yasu’s little mini-revolt doesn’t last long once he sees Kate flash the same red eyes he saw when she was standing atop a pile of bodies, and goes back to Zvezda with his tail between his legs (though he still doesn’t swear off cigarettes.) As for the last bastion of smokers, they seem to turn into soulless ghouls milling around the street. Zvezda heads home, and everyone ends up back in their cozy little spaces.

So if this episode felt too preachy and mean to smokers, remember we’re talking about the whims of a little girl who feels very strongly about the subject. And at the end of the day, she isn’t wrong: second-hand smoke is dangerous. It comes down to moderation in opposition to an action: Kate has none, and is powerful enough not to bother with any. We’re reminded of a kid on This American Life (listen here) who tried to force his family to stop eating meat. His mom made him (grudgingly) admit that he didn’t get to decide what other people are allowed to eat. Of course, if this kid could summon a giant foe-smiting fist, things would be different….