This is my courtesy second viewing of Heavy Object, and I can predictably report no significant improvement. It didn’t help matters that this episode spends its first four minutes re-staging last week’s cliffhanger, as if it needed padding. While there was more action and drama in this second outing, none of it came close to meet my quality standards, to say nothing of impressing me with anything novel.

When the Princess’ Object gets its ass-kicked, she ejects and sends out an SOS to lure the enemy Object, which ignores the white flag and continues attacking the Alaskan installation. Dozens if not hundreds are killed gruesomely, but there’s almost no weight to any of it, because Qwenthur and Havia don’t seem to be in any danger at all out in the open, for some reason. There’s a particularly bad sense of where they are in relation to everything else on the battlefield, and how exactly they manage to stay alive while ducking the Object’s massive, deadly weapons.

Even worse is the pacing and timing of the battle. Q even points out how freakishly fast for their size Objects can move, and yet Q and Havia have enough time to bicker for an extended period with their commander Frolaytia, scamper around, and cover an undisclosed distance on foot out in the open while. Whenever it’s off-camera, the Object ceases to exist as a threat, and when it’s on-camera, Q and Havia survive its attacks and only faceless extras die. It’s a mess.

I’m not opposed to any and all black-and-white, good-vs.-evil conflicts, but I think I can do better than Heavy Object in that regard, as demonstrated when the enemy troops locate the Milinda and immediately start talking about tying her to the Object and seeing how long it takes for her suit to tear off, then implying she’s in for a night of torture and gang-rape whether she survives the dragging or not. Gee, ya think we should root against these guys?

When Q kills the SOBs and rescues the Princess (while Havia saves him from an RPG), Q goes unconscious, and is presumably watched by the other two, while all the while that gigantic enemy Object just…twiddles its thumbs behind some mountain, I guess.

When Q wakes up, Milinda falls over herself wondering why anyone would bother saving her, and then the three decide to try to find a weakness in the Object, as if getting anywhere close to it wouldn’t mean their instant deaths. Q also manages to land on Milina and asses her boobs in his thoughts again, which…yeah.

One would think that the Objects in this world have been effective precisely because they can’t be brought down by a trio of enterprising kids. Then again, the Object was so shy towards them this week, perhaps it’s keeping its distance because it’s pilot is scared of that very possibility, which begs the question: Why exactly are wars fought this way again? 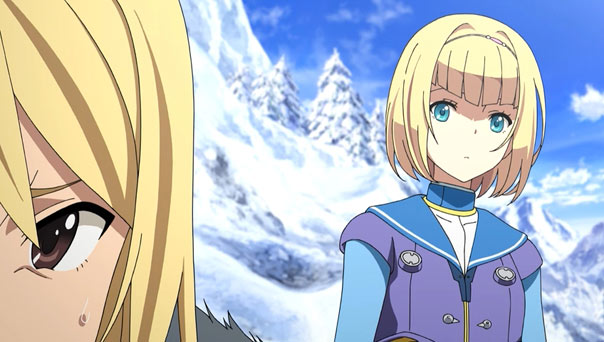 I’m kicking off the Fall 2015 season with the attractive but unremarkable Heavy Object. Despite its title and the mass of its titular superweapons, the impression it left was pretty light. After a lengthy narration introducing us to a world where “clean wars” are now fought between giant juggernauts called “objects”, we settle into the casual workaday life of one young Qwenthur, a common-born student-soldier tasked with menial labor beside his noble-born chap Havia.

Q’s trying to learn as much as possible about objects in order to get rich…or something, and the first-gen multirole object code-named “Baby Magnum”, piloted by the fair “princess” Milinda, is as good a subject as any for his education. While her object is under maintenance, she strolls out into the Alaskan wilderness and encounters Q fishing. The two have a pleasant chat about whether he’s truly “ready”, which is a pretty loud indication his readiness will be tested soon.

Now, I give HO kudos for starting off with a less combative male-female relationship, but Milinda walks a fine line between serene and dull. Both her design and deadpan are uninspiring to say the least. The first fifteen minutes show Q and Havia as two guys being bossed around by one woman, then another, while supporting another, the princess, who has a more important job than them. So there’s every indication this could be a matriarchal military—and then the show breaks out the tired boob humor.

The lads can’t help but mention their 18-year-old CO’s ample bosom virtually every time they see her. And in a maintenance scene Q conveniently tightens a nut that accidentally starts to squeeze poor Milinda right below her boobs, leading Q to a monologue about whether he should help her, which requires—yup—touching her boobs. That was hard to sit through.

It’s not all bad: the Alaskan landscape is quite pretty, and the production and industrial design is nothing to complain about (unless you get into nitty-gritty details like why an airstrip needs to be shoveled by hand when there should really be machines to do that). The battle in which Q learns whether he’s “ready” also comes swift and hard, with the princess echoing the maintenance scene by having to bail out of her battered object.

But then there’s perhaps the most problematic aspect of the show: the objects. Setting aside the ridiculousness of mankind collectively agreeing to fight wars like this, they ironically don’t make all that big an impression in the first episode. Sure, there’s a lot of smoke and explosions, and conventional navy and air force units and even nukes being unable to scratch them, but it’s hard to get over the silliness of the premise.

That could be why the first episode focuses so much on the characters, but they’re all pretty much ciphers who are either overly sedate in their dialogue, or are a bit too proud of it. It’s like the show is trying to infuse some Joss Whedon-esque wittiness into the proceedings, only with more boob humor. I dunno about this one, guys.