We at RABUJOI know you have a lot of options about where to go for anime recaps and reviews, but if you’re reading this, it’s probably because you’ve chosen us, so we thank you. We’ll never lose sight of that, and we are hoping that you and yours have a happy and healthy holiday season.

Also, if you’re fortunate(?) enough to be together with family for Christmas dinner, be sure to bring up horror stories about how one of your fellow trainees stole a potato!—Hannah, Zane, & Preston

Note to Readers: We’ll be offline most of the weekend, which unfortunately means no fresh-squeezed anime reviews until Sunday at the earliest (unless Oigakkosan emerges from his burrow).

It’s not ideal, what with the season just starting (and frankly, kind of flagging) and a couple new shows on the horizon, but RABUJOI’s Summer Staff Data Collection Retreat is long overdue. Memories must be made!

So take care, all, and as always, thanks for reading…when we have stuff to read! 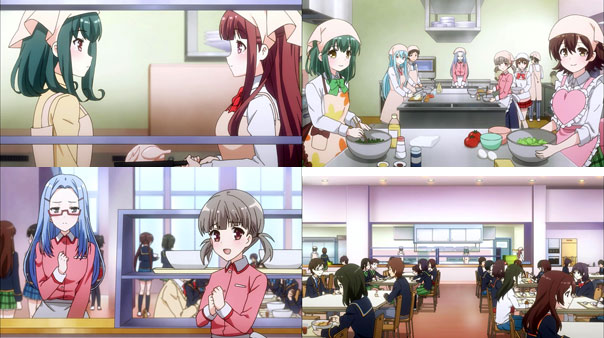 We are thankful for anime, and for you, our readers! Just make sure to fully cook all poultry, and if you get too stressed out about the cooking, have some chamomile tea.

From all of us here at RABUJOI, thank you for our best year ever, and wishing you a happy and healthy 2014…whenever it happened to have started!

Everyone here at RABUJOI wish to express our sincere gratitude to you for taking the time to visit us. RABUJOI’s philosophy has been, and will always be to deliver timely(ish) anime reviews for your reading pleasure, and read you have: In the last five months we’ve more than doubled our monthly readership. 2011 has been very good to us and we hope for that success to continue as we near the Summer season.

We’re well aware that there are a seemingly infinite number of blogs out there reviewing anime. We pride ourselves on providing reviews containing wit, humor, information, and correct spelling, and we’re glad you’ve come, and keep coming, to read them. Regardless of how many people visit or read or come back for more, we cannot look at the future of RABUJOI remains…luminescent. So keep reading, and don’t be afraid to post a comment! Thanks again!

As the year of 2010 and the very long, dense Fall 2010 season winds to a crawl (only four episodes left to review), we here are RABUJOI would like to once again take the time to thank everyone who has visited the site and skimmed, read, and/or perused our reviews. We don’t believe in such a thing as a blog thanking one’s readers too often — without readers, RABUJOI would be no more than digitally talking to a wall. Thankfully that hasn’t been the case, especially this December, which has brought us more than double the readers as November, an increase unexpected by all.

It’s always nice to see people reading your stuff, whatever it may be, but ultimately, watching good anime is its own reward; watching great anime, more so. With 2011 comes a brace of fresh new series, some from studios and starring seiyus we know well, while others are unknown, or at least less well-versed. But like the beginning of a new sports season, everyone starts out undefeated; unblemished; perfect. In the next couple weeks we’ll be putting the new series through their paces and share with you our impressions. We’re looking forward to it. So, keep reading, if you wish, and from all of us, have a happy and a healthy New Year!

Everyone here at RABUJOI wish to express our gratitude to you for taking the time to visit us. RABUJOI’s philosophy has been, and will always be to deliver timely anime reviews for your reading pleasure, and read you have: November’s traffic numbers absolutely obliterated both the blog’s previous two months of existence, as well as our most optimistic expectations.

We are cognizant that his fall has been rather unique in the sheer volume of reviewed series, and that numbers may settle down come winter, when the number of series worth reviewing will be halved. Regardless of how many people visit or read or come back for more, we cannot look at the future of RABUJOI as anything but bright. Thanks again!