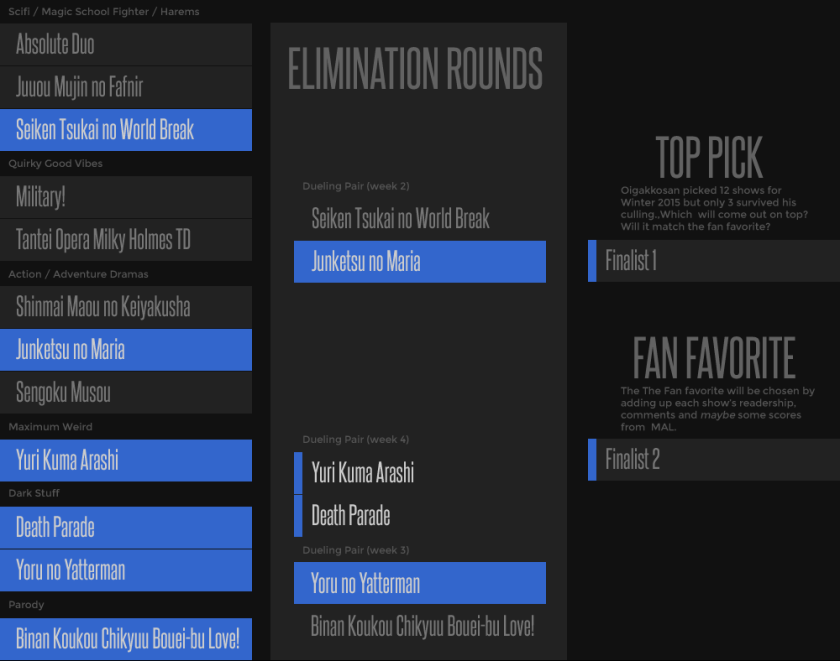 The current crop is pretty good and, despite rough patches, actually turning into something memorable. That may not sound like much but, as my fellow reviewers will testify, memorable is a high bar to reach in my book.

By far the hardest pair to resolve, Yatterman’s stronger third episode and greater potential for an interesting story ultimately won out. I know! I know! This isn’t super surprising in the grand scheme of things. Binan is just a gender-swap twist on the Sailor Scouts genre but it delivers really really really good dialog each week.

Add Yatterman’s difficult-to-understand-without-significant-background second episode, drab color pallete, and slow pace and I truly considered siding with the simpler of the two shows.

If you enjoyed Gekkan Shoujo Nozaki-kun and other tightly written school comedies, you owe it to yourself to give Binan at least three episodes. So far it’s shown no intention of becoming a BL show, nor has it stuck strictly to the safety of it’s formula.

Still, there’s a formula at its core and there’s not much at stake. Certainly, not much that I can see writing about each week?

Winter’s second week was obviously less busy than the first. However, due to World Break – 02’s late arrival in my stream, the decision took longer to make than anticipated.

Junketsu no Maria is a deeply sincere show, with rich characters and setting, and a quality art style. So it’s hardly a surprise that World Break won a lot less of my interest with it’s typical super protagonist enters magic school and wins all the harems formula.

That said, you may still enjoy World Break because it takes its deeply flawed scenario to heart. The magic system, which sometimes involves lengthy poetry narration and in-air finger writing is so dumb and impractical you just have to laugh at it all.

If nothing else, it’s well meaning but dumb characters are likable and, even though it’s only used to justify “protagonist wins” and the ecchi love triangle, the concept that students have multiple lives with multiple family and romantic partners around and knowing each other even though they’ve never met has tons of potential.

Sadly, just not enough for me to write about each week.

Some of you have expressed a desire for the semi-finalists to get more chances to prove their worth and, now that I’ve cut my review list down to 6 shows, I’m not against this.

Winter’s first week was a busy one! I reviewed 12 new shows, gave second opinions on six, and continued to co-review two more. Overall, I’m not exactly blown away by anything the season has to offer so far, though I’m happy enough.

So here we are on Monday morning and, as promised, I must drop half of the new roster. Honestly, these weren’t hard choices. That, I think, comes next week.

By far the easiest show to drop, Sengoku was all wrong. Ugly, fussy design, constant exposition, and no attempt to ease us into any of the characters (let alone introducing any of them in a way we could keep track of while all of their names were thrown around) it is a terrible show. Tragic really, because I have a deep love for samurai and pseudo-history.

Even if it weren’t otaku-pander-food, which I had no interest in watching, Milky Holmes is rather disposable. The fact that this is it’s third season but didn’t require any knowledge of that, nor showed any meaningful connection to earlier work, proves that point. There’s a slim chance you’ll enjoy it if you liked Magic Kaito 1412 last season but I doubt it.

It’s subjective but Juuou beat out Absolute Duo for blandest magic school harem fighter in my book by the narrowest of margins. Even if it weren’t dull, derivative, dribble, the lolicon vibe to the ‘students’ at elite magic whatever is a turn off. Despite it’s lower rating, Juuou is worth more than Milky because it’s a more palatable genre…

‘Absolutely’ unoriginal. Nothing about this show stands out, which means it isn’t terrible but devoid of value. If you are very new to anime you may enjoy it. Otherwise, if you absolutely must watch a bad harem this season, try World Break instead. 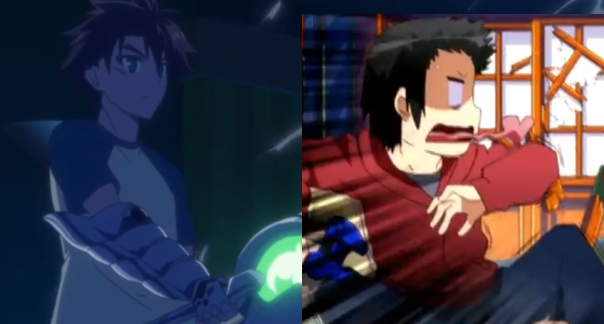 Some reviewers have noted that Demon Step Sister does a better job than most in its genre. The protagonist comes pre-trained, which avoids the laborious process of mid-season teaching. Likewise, he isn’t special (at least, not yet) He’s just a hero, which is more special than a normal person, but not uncommon for the mystic world. Still, ugly, fanservice heavy, and zero emotional attachment makes it awful hard to recommend.

I’m not exactly sad that I’m dropping this show (I’ve never managed to stay with a mini-format for an entire season) but it wasn’t that bad, as far as silly over the top comedies go. Honestly, if I wasn’t so confident that I’d lose interest it’s debatable if I would keep this over World Break instead. Still, what’s a wacky, forgettable three minute program really got to offer? 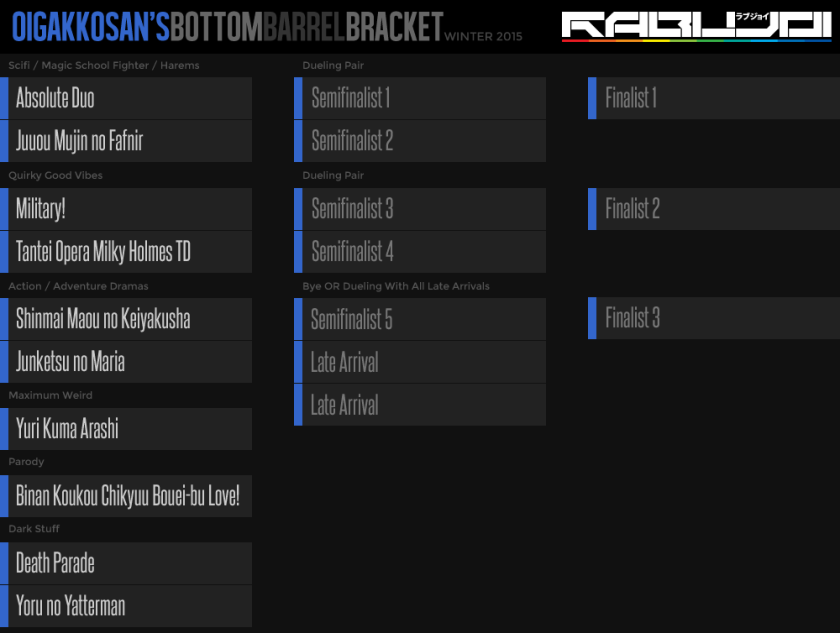 My role on RABUJOI’s staff is partially to search for gems hidden among the shows that missed our radar when planning out our schedule. This season, I’m using a bracket system to more quickly focus on the shows that are good and worth reviewing.

My loose plan is outlined above but may change if more than one late-arrival is amazing or if I receive hand-me-downs from my fellow reviewers. Who knows? I could drop to fewer than three shows since I’m already co-reviewing Cross Ange, Drrrr x2, and Parasyte.

Seiken World Breaker and Sengoku Musou look to be my current late arrivals. Do you know of anything else I should watch that isn’t on the list? Questions? Drop a comment below!