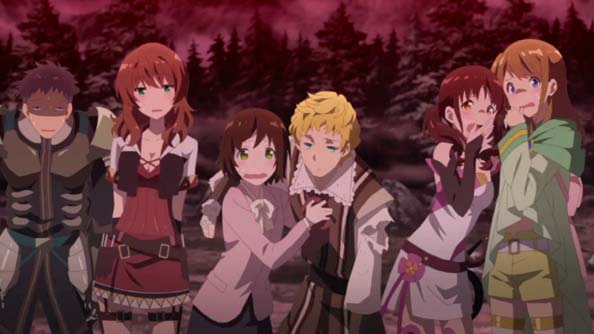 Arifureta began as a grim, visually unremarkable dungeon crawler, hinting at global conflicts and structures of political and social control… before devolving into guy-shoots-monsters-gets-harem-rinse-repeat. Pitting guns, missiles and motorcycles against orcs and wolves is tricky to make compelling, and Arifureta’s mediocre animation, slow plot, and constant battles doesn’t help.

Worse shows aired this season but few featured dragons being anally raped by the protagonist with a giant metal spike, nor said dragon joining said protagonist’s harem afterwards. However, and I’m going out on a limb here, even if this is up your personal kink, Arifureta’s PG-13 sensibilities probably wont go far enough for you. Niche at best, Barely Watchable for the rest of us.

Dr Stone is delightfully consistent with it’s focus on science process, over the top characters, and methodical plot to rebuild society from the stone age up. While its medium term objective (defeat super-strong/ super evil antagonist with science) has taken a back seat to gaining support of the villagers Senko discovered mid-season, its not forgotten.

We’ve learned about electricity, food chemistry, and glass as much as human nature, motivation and weakness. Hand in hand with lovable characters and charming visual style, Dr Stone is probably my most recommended show of the season.

Given’s relationship story is lovely, thoughtful, and matured with deeper issues of loss. The wow is in the details. From taking a dozen buses just to stand by the ocean, just to stand where you once stood with a close friend, to walking off stage after only one song, Given doesn’t over explain itself with dialog.  It’s solid but, like real romance, the best parts come from getting to know the characters. So I called it quits after episode six. Still, highly recommended 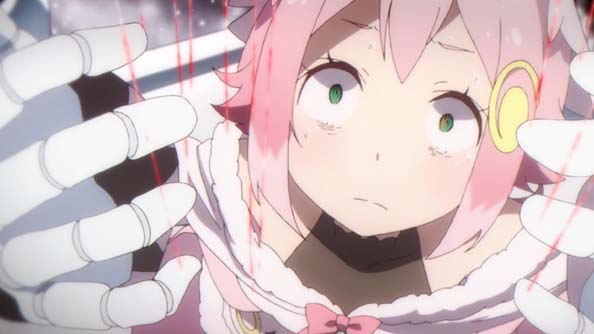 Granbelm finally developed an emotional core: Mangetsu is a magic puppet created by Ernesta’s subconscious desire to have a friend who isn’t an effed up mess. Also, despite earlier signs that losing wasn’t that big a deal, it has been revealed that girls die all the time in magic fights but no one remembers because… magic amnesia.

These are solid reveals and Mangetsu’s heart filled good bye to the cast (almost all of which immediately forget she ever existed) was strongly delivered. It just took way too long to develop. Combined with a dull pure evil villain, power levels that swing at the whim of the story, and Granbelm’s misunderstanding of what a mystery is (as opposed to just being confusing) and the show is only watchable.

Maou-sama, Retry! started off so absurdly bad, so generically Demon Lord/Isekai, that it had a certain charm. As it strolled forward, it took no greater objective than to introduce new characters to Maou’s harem, and forget about previous characters and potential destinations for the story. Aku hasn’t even been in the previous two episodes. The result is powerfully without purpose. It doesn’t care. You shouldn’t either. Barely watchable.

UchiMusume also suffers from a lack of purpose and follow through. For a show that features a central character who’s past is a mystery, and a hero who occasionally kills people for political gain, there’s an awful lot of wandering around aimlessly and eating food!

The result is harmlessly cute but smidgens of world building do not make up for a four episode long trip to and from a village to buy a new trench coat. It’s Barely watchable.

Arifureta doesn’t bother with any light-hearted introductions or explanations into how Nagumo Hajime and his class ended up transported to a new, fantastical world, it simply plops us right beside him as he wallows in an abyss of despair. He’s weak, ineffectual, and his only magical skill is transmuting the rock in his immediate vicinity.

He was underleveled way further up in this labyrinth; now he’s prey for prey. When a giant polar bear-like monster with a tanuki face slices his left arm off and eats it, he retreats into a cavern of his own making and passes out under a healing holy crystal, bleeding and waiting for death.

Then and only then do we get some insight into how he ended up in this situation: he was on a quest in the labyrinth when a careless classmate touched something that transported them to a far more dangerous level.

He manages to save his classmate Kaori from a rampaging behemoth, but while the others cover his escape, one of them targets him directly, sending him plummeting into the abyss where we first meet him.

Kaori, who may not see Hajime as a love interest but still looks out for him, warns him not to come on the quest after she has an awful dream about him meeting his doom, but he convinces her to help protect him, and he’ll be alright.

Turns out her dream was prescient, but when Hajime wakes up in the abyss, in pain but still not dead, he decides to change his tune and pump himself up into Survival At All Costs Mode. First, he drinks holy water, then he captures a smaller monster and eats its raw meat, which ends up poisoning him and turning his hair white.

But that’s not all: in addition to his badass hair, Hajime’s muscle mass and stats have all increased, and he’s gained the skill of the monster he ate. Much like Rimuru Tempest when he first arrived in a new world as a Slime, Hajime uses the ample resources around him to continue leveling up and build weapons that will let him defeat ever more powerful foes.

It’s a very A-leads-to-B-leads-to-C procedural process, but one thing’s for sure, Hajime’s seiyu Fukamachi Toshinari stops sounding so annoyingly whiny and adopts a cooler voice to go with his cooler appearance and upgraded skill-set. It’s as if he had to fall into the deepest abyss (and get betrayed by a classmate) in order to awaken the will to become a stronger person in this world. 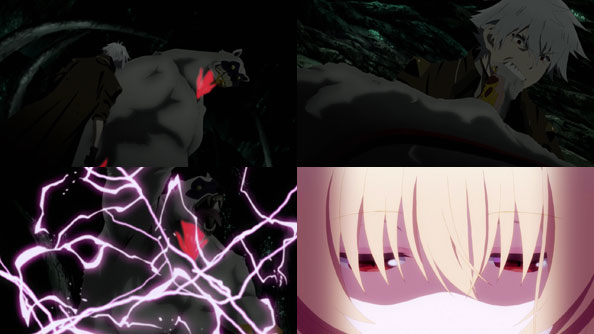 Armed with a pistol and grenade, Hajime locates the bearlike monster who ate his arm, and utilizes all of his new skills to tear its arm off and eat it, then puts a bullet between its eyes. Hajime is no longer messing around; he’s going to survive and get home, and he’ll kill anyone “in his way.”

Isekai shows are like American crossover vehicles: there are a lot of them, and most of them are exactly the same, but still others are actually good. I’m not quite sure what Arifureta is quite yet, but it at least distinguished itself nicely by putting us right beside a protagonist who had already literally hit rock bottom.

Aside from some glimpses of his elaborately kitted-out classmates and the awakening of a starving, red-eyed Loli, this was a stripped-down and minimalist outing that focused on one young man shrugging off death and despair and improving himself to the point he can climb out of the darkness.

I’ll see where he leads…especially since Youjo Senki taught me the dangers of passing judgment on a show after its first episode.