In my experience, Tuesday is a pretty light day for anime, to the point I don’t even necessarily have to watch something on Tuesday. The only reason I would is if there was a show original and entertaining enough to make me watch it. But after an uneven and somewhat bland opening episode, I fear SRX is not that kind of show. 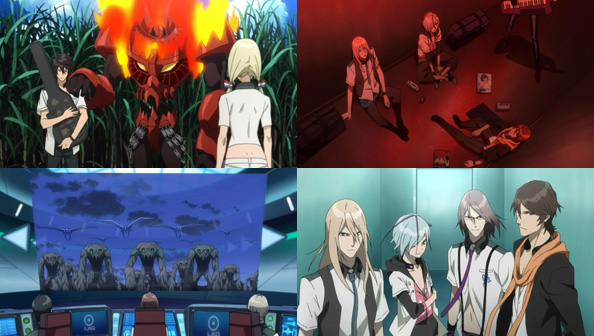 Part of this are the characters: there are certainly plenty of them, but few are named and most are bland as wallpaper paste. Hot pants, a guitar, and a strange half-Engrish accent to not dynamic and interesting characters make. There’s also the matter of the blob-like enemies, called “Nightfly O’Notes”, which while destructive could hardly be called frightening.

A team of four prettyboys called “riders” gear up (in what look like Power Ranger suits) and pummel the NoNs back to their dimension, while a fifth prettyboy (Mr. Guitar) runs into a burning plane to rescue the “6th Dirigent”, a girl in desperate need of a hair stylist and psychiatrist.

Boy #5 AKA Yosuke was unable to transform right until he needed to in order to save the girl, and that’s where the episode ends…right when things are starting to pick up and get a little interesting. I may give it one more episode, but I was not particularly impressed with anything SRX had to offer, especially when compared to the Spring carryovers I’m already watching.