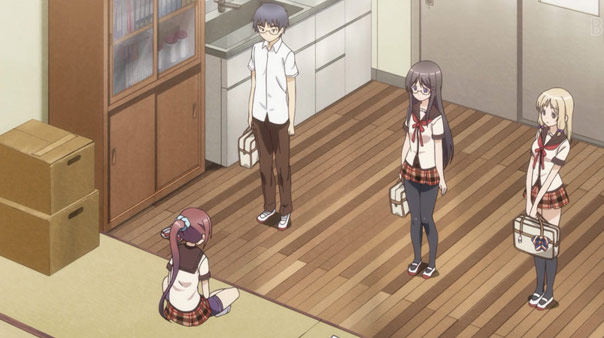 Like another very similarly-animated school comedy directed by Kawaguchi Keiichirou, Sket Dance (which I enjoyed quite a bit, though it didn’t need to run for 77 episodes), the premise of Jinsei couldn’t be simpler: three very different people form a club whose job is to help others. In the case of Jinsei, all three are girls, and the club is headed up by a guy, Akamatsu Yuuki. 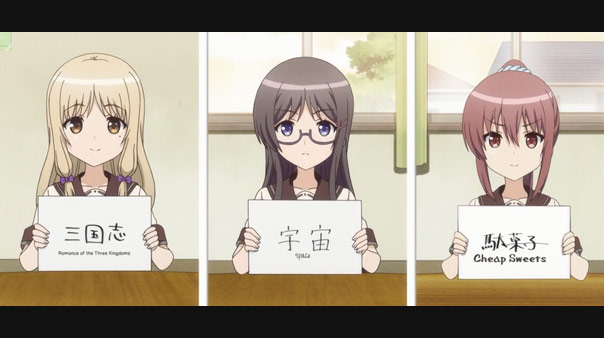 The personalities of the girls match their respective fields: Endou Rino is highly scientific, Kujou Fumi a master of human interaction, and Suzuki Ikumi is a hyperactive jock. If nothing else, they’re easy to keep straight, but they’re also rather one-dimensional. As for Yuuki, his most distinctive feature is his eyebrows, and the scenario has the floral stench of harem written all over it. 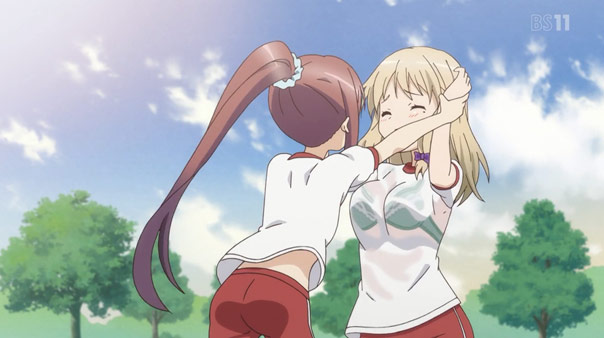 That suspicion grows closer to fruition when the response inaugural question is inexplicably settled by a water balloon fight that turns the gals’ shirts transparent. I swear, when I first saw Fumi’s boobs, I had a feeling they’d either get a close up or get fondled, and both happened. So not an auspicious start, considering how full my plate is right now. 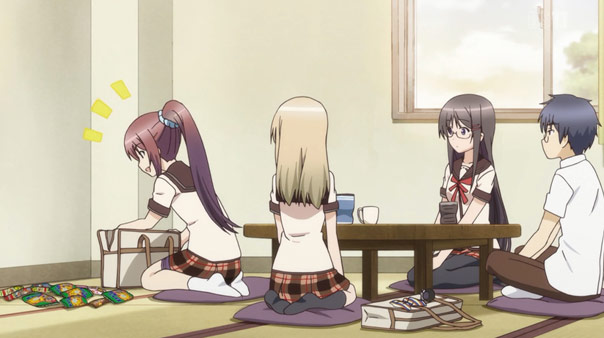 I didn’t mind the general format, though: three questions in all were asked, and each question raised equally contrasting answers (revealed Jeopardy!-style) that would be difficult to combine into a coherent response. Rino and Ikumi clash the most here, while Fumi, the humanities buff, is content to float above the fray. 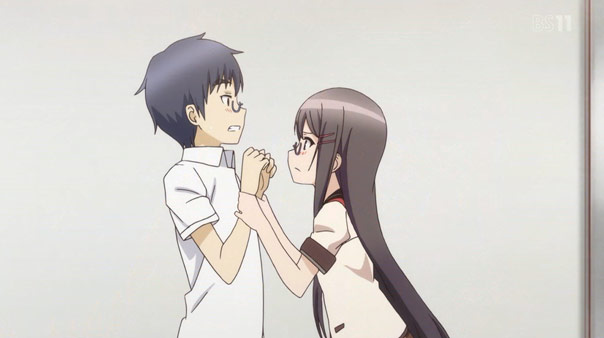 In addition to the silver-haired newspaper president Ayaka and the pink-haired art club president Emi, it’s 5-to-1 girls, something like the golden ratio of haremry, but both the OP and the episode’s final act seems to suggest the only legitimate love interest is Rino. When they end up on a tacked-on date at a cafe as a favor to Ayaka, Yuuki listens to her ramble about random science stuff—but he doesn’t have a bad time. 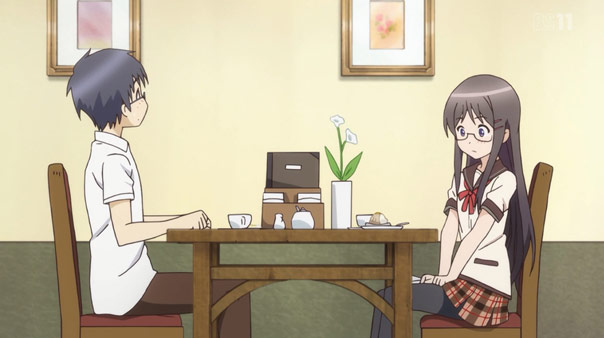 So, yeah, not all the girls are clawing at Yuuki, which is good, because there’s not much to him…I guess he’s a good listener, like Fumi? At any rate, at this late stage in my Summer watch-through, I have to be judicious; one can’t watch too many shows at once and expect to properly enjoy them. While it’s a promising vehicle for discourse on a diverse array of topics, nothing about Jinsei particularly wowed me, and at times, it bored me. Life may be full of surprises, but there weren’t any here.