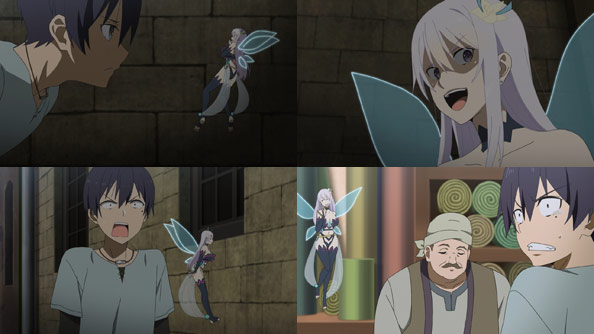 For someone supposedly there to help Hiro out, Reona has nothing but bad news for him: Kiwame Quest can’t be restarted unless he buys a new console, which she just happens to be willing to sell for ¥120,000, or ¥30K more than he paid for his. Considering how quickly easily Hiro ruined his game, it’s no wonder KQ is a dead game.

He also learns that in the city of Ted, AKA the Closed City, he’s already a wanted fugitive, and so must exercise caution when buying a cheap cloak to mask himself. The clothes merchant hikes up the price in exchange for staying mum about seeing him. It’s looking more and more like the enterprising Reona wrangled Hiro into this game in hopes he’d give up and spend more of the money he doesn’t give to school bullies to her. 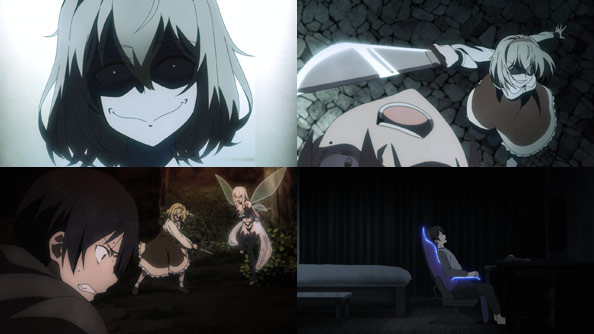 Despite costing most of the cash he started with, the cloak does nothing to hide Hiro from his childhood friend Alicia, who arrives in heightened fruit-knife wielding psycho mode. Ai Fairouz brings a lovely chaotic intensity to the role, and after praising the ten-year old’s NPC AI magic, advises Hiro to run. Running makes him tired—just like real life—only since he’s never actually run for his life before, he’s doubly exhausted.

His title changes from “Best Friend Killer” to “Running Best Friend Killer: Fleet-footed Amicide.” Having had enough, Hiro tries to log out, but he’s still technically in combat with Alicia, who appears and slashes his hand. Despite Reona assuring him one doesn’t feel any more pain than a bruise from fallnig down stairs, Hiro is still caught off guard by the pain. Reona, invisible to Alicia, punche her in the face to allow Hiro to flee and log off.

Back in the real world, Hiro notes how he’s never run all-out like he just did in KQ. His friend tries to prod him into confronting the bullies using him as a wallet, and Kaede makes another brief appearance to complain about the noise he made last night, and look at him with disgust. He ultimately decides to go back to KQ, and not just to go all-out again…but perhaps so the shitty experience there makes real life seem not so bad? 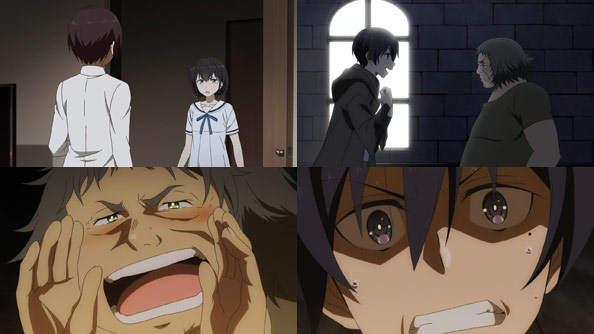 Upon logging back on, he’s in the exact same pain as when he was last there, and his hand is still bleeding. Naturally, simply touching the medicinal herbs in his pocket doesn’t heal him. He then happens to bump into Ginji, another “best friend killer” who’s been playing the game for years. Ginji crushes the herbs and bandages Hiro’s hand, then takes him to a casino to drink a cola-like beverage he’s inexplicably drunk on.

Reona told Hiro to seek Ginji out to learn how he salvaged killing his best friend at start of the game, only to learn he didn’t. In fact, he also killed his childhood friend, and feels zero remorse over it. He also mentions that despite how hard this game is, and how you enter it with your real-world attributes, there is one man, named Kamui, who actually managed to clear the game 100%. But that’s enough chit-chat, as Ginji sells Hiro out by yelling that the fugitive killer is there.

Full Dive’s high concept asks me to suspend my disbelief so high, my arm muscles strain to keep it in the air. It doesn’t help that the visuals are underwhelming, or that the color palette and lighting are oppressively dark and drab—this may be the ugliest Spring show.

Still, if there’s one thing I buy just enough—for now—is the rationale for Hiro sticking with KQ: of all the people in real life, Reona is the only one we’ve seen who not approves of his video game hobby, and wants to play with him. In other words, the closest thing to a friend. He just needs to stay away from fruit knives! 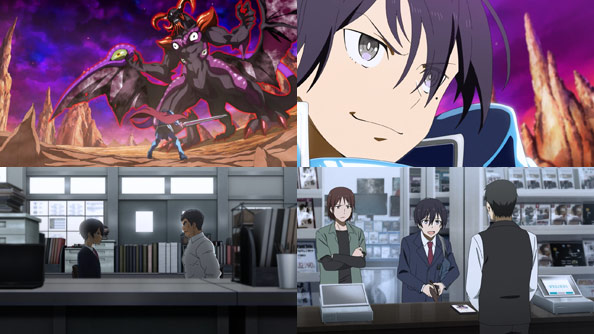 Just as Tyrell Corporation’s replicants were billed as “more human than human”, Kiwame Quest was meant to be a full-dive VR RPG “more like real life than real life”—stimulating all five senses and capable of near-infinite routes. The problem is, video games are supposed to be like video games: a relaxing escape from the troubles of real life. So KQ was panned and receded into obscurity.

Our dull MC Yuuki Hiro’s life sucks. Something traumatic happened two years ago that everyone around him can’t help but keep bringing up and dancing around; he’s entering his final year of high school and still not sure what he’s going to do. He “lends” cash to two delinquents, so he’s a key short when it’s time to purchase Finalizing Quest 22 (the show’s FF equivalent). 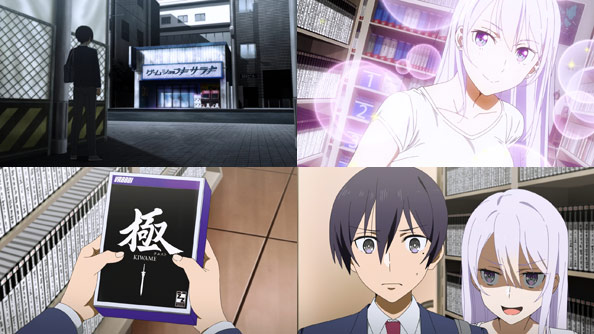 Certain he won’t find FQ22 for sale at a lower price, he rolls the dice at the unassuming and deserted Kisaragi game store. The newest FQ on display is last year’s, and when he asks the gorgeous clerk Kisaragi Reona (Taketatsu Ayana) if they have 22 in stock, she goes on a passionate and unsolicited rant about how people just keep buying FQ out of habit despite diminishing returns.

Reona has something else in store for the low, low price of 10,000 yen: Kiwame Quest, which Hiro has never heard of. Dismissing FQ as “innocent”, she calls KQ “a super hardcore full-dive RPG for adults”, and since she logs in regularly, she’ll be there to teach him what he needs to know “attentively and patiently”. Hiro reluctantly agrees to the transaction and heads home. 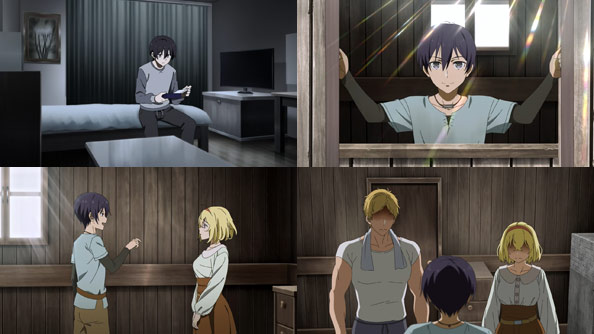 Hiro’s home, by the way, seems to have been lit by Zack Snyder. After learning KQ is a decade old but not being able to reach Reona on her phone, and after the obligatory walking in on his sister in her underwear, Hiro settles into his room, switches on his VR gaming system, and dives in.

He’s initially underwhelmed by the opening spiel, telling him to begin the quest to defeat the Demon Lord by leaving the city and heading to Flora Castle. But once he coalesces in the game world, he is soon legitimately impressed by the realism, and the fact he can feel the metal of a window handle and the wind blowing in.

He soon meets Alicia, an NPC who is anything but. She’s his character’s childhood friend, and Martin is her “nice young man” big brother. They’ve come to invite Hiro to join them for apple picking. When he tells them ihis intent to leave the city and asks where Flora Castle is, they react like his head’s on backwards. 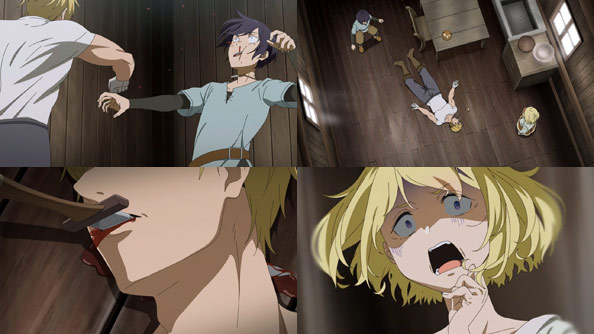 Apparently there’s no entering or leaving the city walls due to the heightened threat of goblin attacks. When Hiro waves that threat away, assuming it’s a low-level battle, Martin is convinced Hiro is mad and tries to beat him back into coherence. It’s here it’s confirmed that a punch to the face is every bit as painful as the real thing.

Thoroughly pissed off and out of patience by a game that’s not going the way these games usually go, Hiro lashes out at Martin, shoving him to the ground. When he doesn’t move, Hiro leans in to find the knife Martin was using to cut an apple went straight through his mouth and out the back of his throat, killing him. 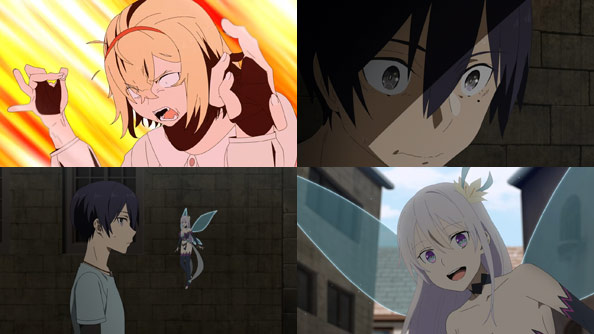 Alicia freaks, and Hiro, still not sure how the hell things got to this particular place, decides the only thing to do for now is to run. A crazed Alicia chases him like the Terminator, but he eventually loses her in a downtown alley. It’s there where Reona finally joins him, but in a neat bit of camerawork it’s revealed she’s a tiny fairy, who is there to be his guide.

She also points out that the little tag around his neck is etched with a title to denote his game progress so far. Hiro is unable to tell her what has happened before she reads his tag and learns for herself: “Best Friend Killer.” Hiro’s been diving less than ten minutes, but it’s already Game Over, Man.

Full Dive is helped by its offbeat approach to VR game immersion, and by its crisp and highly expressive character designs and smooth animation. It is hurt more than anything else by its absolute flat-line of a protagonist. Granted, some of his reactions are fun and he’s supposed to be dull. Still, I want to watch the next episode, if nothing else to see whether he’ll start over or continue on from his bloody, disastrous start.