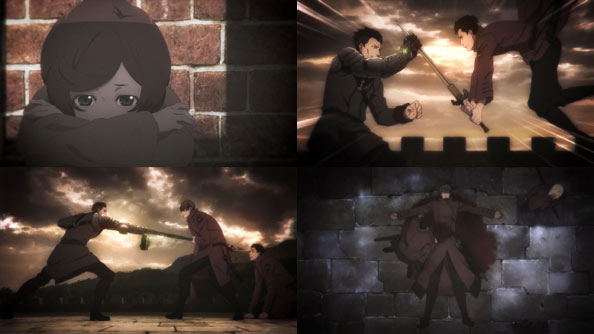 This episode doesn’t start on the sunniest of notes, dropping back a few years to chronicle the history of people near Mariya meeting their ends because she sees herself as something of a talisman of bad luck. We also witness a younger Free being bailed out by his friend Jet, who takes a blade to the gut in his place. It’s almost as if both he and Mariya are bad luck to those closest to them. 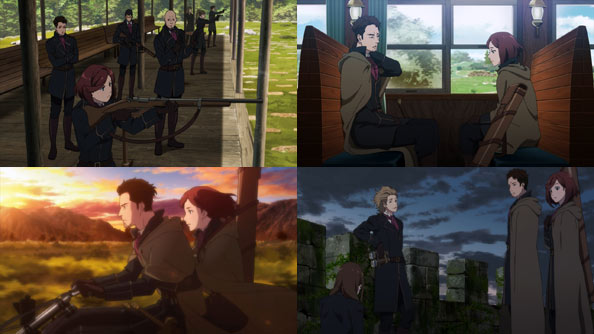 Thankfully the dreary, muddy browns and grays give way to the greens and blues of the present as Mariya settles into Dorothea and distinguishes herself in target practice. She accompanies Free to some ruins where it’s believed a large-scale “artificial fairy”transaction involving the mafia is about to go down. Mariya seems mostly resolved to honoring her former friend and big sis Ver, who told her the Ver she knew is gone. She also meets Serge, who has a sniper fairy, and Clara, who has a recon fairy. 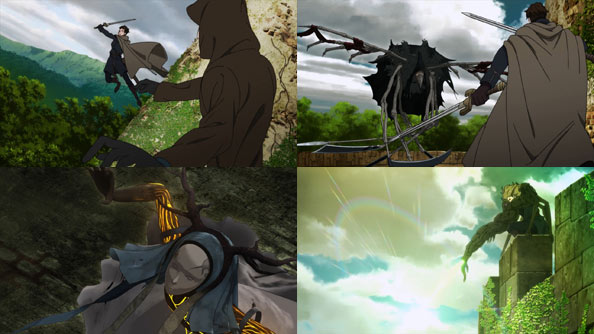 Free’s old comrade Wolfran Row shows up, apparently now a mercenary hired by the mob to ensure the deal goes down, but Dorothea is there to interdict. Like Ver with Mariya, Wolfran doesn’t hesitate against Free for a second, and while Mariya’s fairy protects her, it loses both of its arms in the process, which means she can’t summon it again the rest of the episode. Thankfully, Serge is able to bail her out and force Wolfran to fall back. 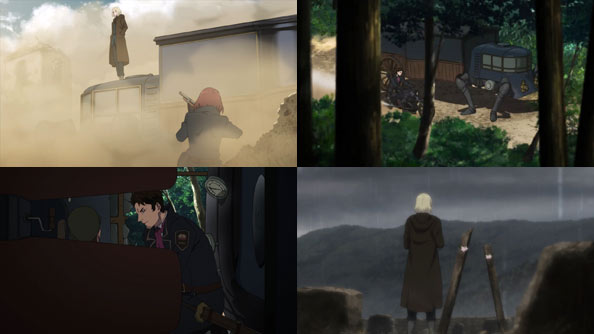 Free and Mariya catch up to Wolfran again, who sics three artificial fairies at them. Once they’re dealt with, Free and Wolfran go one-on-one again, but it basically ends in a stalemate with Wolfran fleeing in a very bizarre transport that uses legs instead of wheels. By the time Free catches up, not only is Wolfran nowhere to be found, but he’s killed everyone on his side, leaving no trail for Dorothea to follow.

This is all still…fine, just fine…but I can’t help but feel like Fairy Gone isn’t leaving much of a trail for me. A lot happened this week, but for the second straight week I didn’t really come away actually caring about any of it. Ichinose Kana does her best, but Mariya is bland…as are her Dorothea comrades, and her and Free’s flashbacks did nothing to change that. Meanwhile the soundtrack, apparently all done by the same band that did the OP, is hit-or-miss. 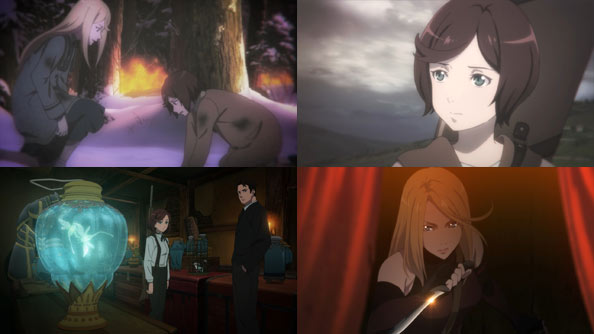 Like Owari no Seraph, Fairy Gone centers on two friends who went through hell together but separated and then encountered one another years later on opposing sides of the “war after the war.” They are Mariya Noel and the slightly older Veronica Thorne. Their village was burned along with the fairies who resided there, and they had no choice to escape.

Mariya almost gave up, but Ver made sure they got away safely, only to leave Mariya alone to pursue her quest for vengeance. Many years later, Mariya is in a mafia family providing security for a fairy auction, while Ver is there to steal one of the lots—a page from the Black Fairy Tome. 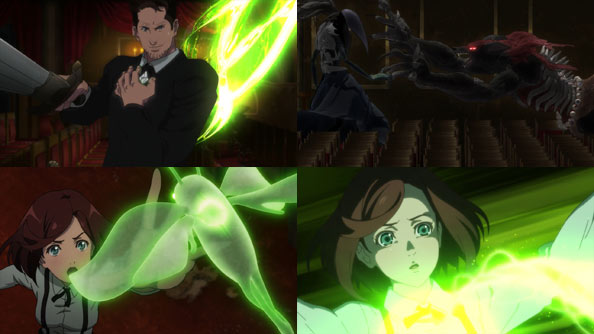 When Ver takes the stage, she doesn’t hesitate to shed blood to attain her quarry. Mariya’s ostensible boss, Free Underbar, isn’t messing around with Ver, summoning the werewolf-like fairy within him to counter her weird birdlike fairy.

Mariya’s loyalties are clearly torn, as the whole reason she joined the mafia was in hope that one day she’d find Ver. In the midst of battle, a glass container shatters and a fairy meant to be auctioned off is released. 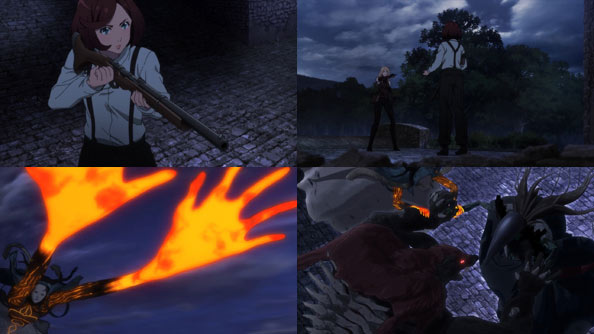 It makes a beeline for Mariya and basically merges with her, making her a summoner just like Ver and Free, and thus giving her the power to break up their duel. Mariya does just that, summoning her fairy to grab Ver and Free’s fairies and dispersing them both.

While the characters are 2D, the fairies are CGI, but the juxtaposition of the two styles isn’t jarring, and the designs are cool. 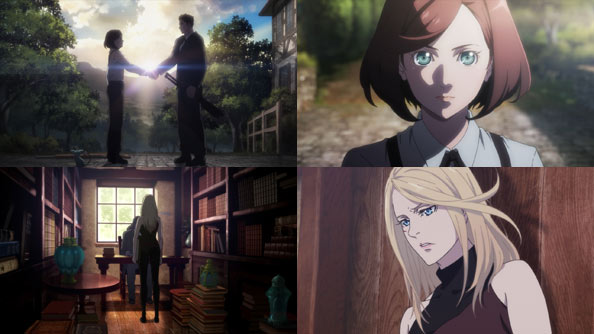 When the dust settles, Ver has fled, and Mariya finds herself in an interesting position: she is a criminal by dint of now possessing a fairy. Free, who had only infiltrated a mafia family, is actually a member of an elite group of policemen called “Dorothea”, who track down and arrest illegal fairies.

So Free gives Mariya a choice: get arrested, or join Dorothea as a recruit. Mariya chooses the latter, as it will enable her to resume her search for and reconnection with Ver—whether or not Ver wants to be found, or considers herself the same person who parted with Mariya years ago.

Fairy Gone is…fine. I’m on board with the estranged friendship angle. The action is decent. The soundtrack is outstanding. But like Zane with some of the new Spring shows, I wasn’t ever really wowed. You can chalk that up to a lack of any original elements to the premise or narrative. This is, so far, basically a period Tokyo Ghoul, a show I had to stop watching when it started adapting its source material so quickly I was totally lost. So we’ll see.