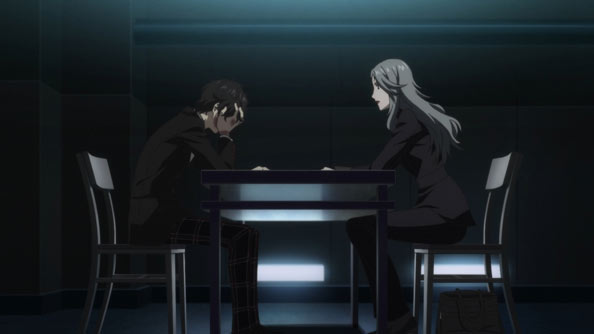 Amamiya Ren has a lot going on. After a casino heist that goes perfectly according to plan…until it doesn’t, he finds himself arrested, his mugshot taken, and thrown in an interrogation room where he’s beaten and drugged.

Finally, something of an advocate arrives in Niijima, who assures him no one else in his crew was caught, but if he wants safety she’ll need honest answers to questions about the reason for the heists, along with what he knows about the “other world”, and how its possible to “steal hearts.”

Then a blue butterfly descends and informs Ren that while he’s a “prisoner of fate” whose future has been all but sealed, there’s still a slight hope of victory if he meets certain conditions regarding the “memories of his bonds” and the “promise of the truth” he and his friends tried to achieve. 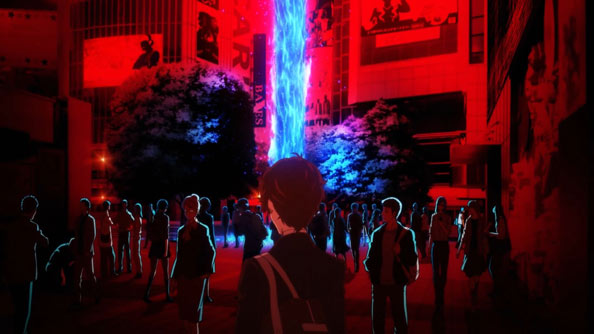 That’s all painfully vague gobbledygook if you’re neither a dedicated Persona fan or haven’t played the Persona 5 RPG, being spouted from a butterfly, talking to an MC who is defined not by any outwardly discernible personality traits but simply by the circumstances that unfold around him and the choices he makes within them (in other words, the generic RPG protagonist).

I’m no Persona expert, so I came into this fully prepared not to know much about who anyone is or what the heck was going on, but I feel a perspective neither informed nor influenced by the source material to be useful in assessing whether an anime adaptation can stand on its own as entertainment. 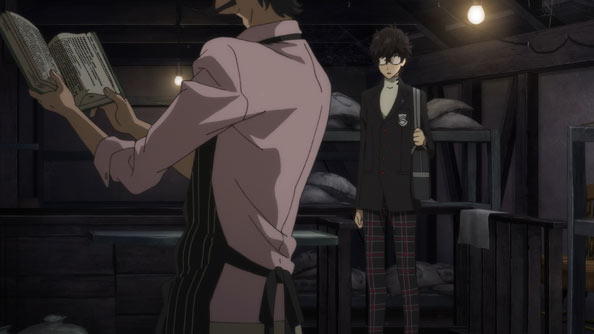 In that regard, Persona 5 The Animation has its appeal. The production, led by A-1 studios, is clean, crisp, and vivid. The setting is confident; the Tokyo it depicts feels like a real, churning metropolis in which individuals can easily get lost and where reality itself may bend just around a corner. The soundtrack contributes to the immersive experience.

If I were to guess, the person who stops a man from assaulting a woman in a brief flashback just before the six month rewind was the incident that got Ren in trouble and kicked out of his own school. He’s gotten a year of probation, and during that time, an old geezer named Sakura who runs a cafe of the same name has offered him a room to live during that time.

All Ren has to do is keep his head down and his nose clean for that year and he will be back on the path to respectable adulthood. 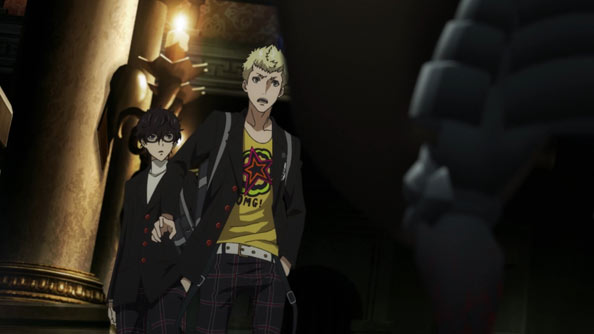 Naturally, our Prisoner of Fate has trouble staying out of trouble, thanks to a suspicious red app icon appears on his phone, which he opens to reveal the otherworld that exists in the same space as the ordinary one. He also dreams of the Velvet Room (which is in the form of a prison), and meets briefly meets a gobliny dude, Igor, whom I remembered from P4.

Additionally, the new school he’s attending has a gym teacher who is not a good guy, even if one of Ren’s female classmates has no trouble accepting a ride from him. Ren also meets a blonde male classmate who spouts a bunch of stuff about kings and castles, which the weird app on Ren’s phone records. 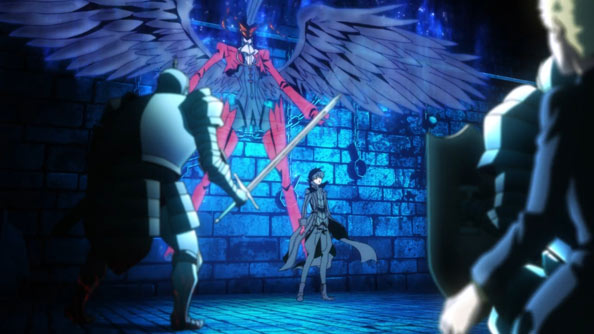 Before long, the two classmates are in a castle, locked up in a cell, and ordered to be executed by the castle’s king, the gym teacher in an utterly ridiculous get-up. When the “king” tries to kill the blond guy, Ren has a choice: run or fight, and after some hand-wringing, decides to fight (naturally), summoning his Persona, Arsene.

Because I had almost identical impressions to this first episode as the 00 preview special “The Day Breakers”, I’ll simply repeat my verdict from that review, in keeping with P5’s penchant for timing back and forth through time:

Watchable and mildly diverting, but all surface. I can imagine myself spending dozens of hours as the bespectacled protagonist in the P5 RPG; I could even probably watch a good portion of its anime adaptation, should it get a full cour or two down the road. I’m just…not sure I either need or want to.

Basically, as good as the show looks and sounds, there’s not quite enough to keep a non-Persona fan/player like me around. Your mileage may vary.