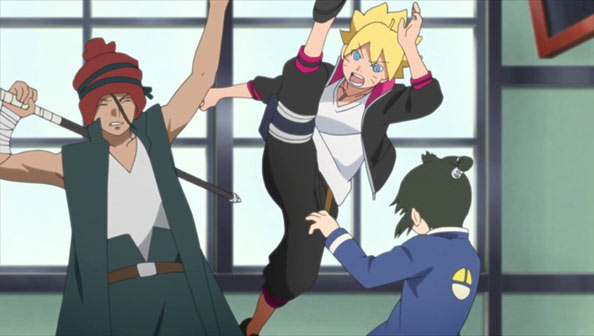 Last week I felt bad for Hinata stuck at home as a housewife and mom when she, Naruto, and their friends once did battle side-by-side on the front lines…but I just might have it all wrong. This peaceful life, both for themselves and for their children, is what they fought for in the first place. But some youngins are restless, and long for a time they probably romanticize since they weren’t even alive for the worst of it.

One such knucklehead, Aino Iwabe, picks on Denki, leading to Boruto challenging him. It’s the second straight week Boruto saves Denki from a bully or bullies, only this week there’s much more emphasis on Boruto as a brat riding his illustrious dad’s coattails. After all, he crashed a train into a mountain and just got a slap on a wrist. 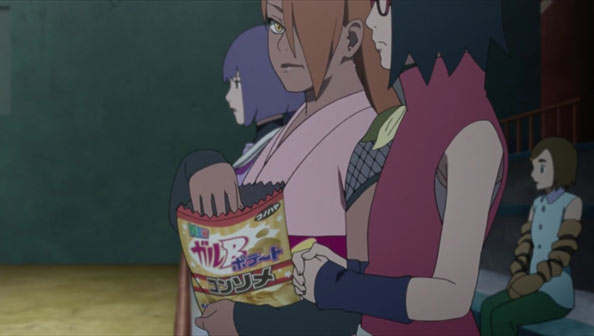 Between that incident, the lenient punishment, Yamanaka Inojin’s shade, and Iwabe’s taunts, Boruto has to work for acceptance by his peers (at least the ones who aren’t Denki or Shikadai). That means the class dismisses itself for a good old-fashioned schoolyard duel.

Boruto is able to keep up, but gets thrashed around quite a bit by the older and clearly more advanced Iwabe. Even Uchida Sarada, who had put up a haughty dismissive front to that point, seems to fret over the outcome of her childhood friend’s fight with the older kid. 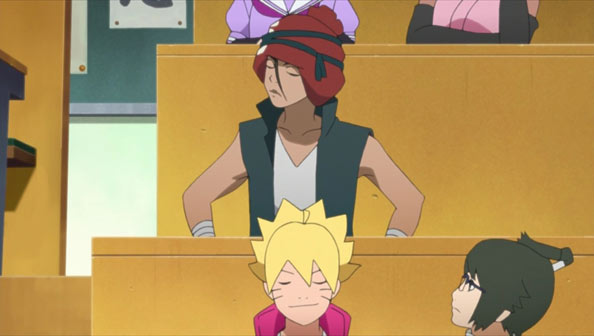 In the end, Boruto all but convinces Iwabe that everyone has their individual circumstances, but blaming “the times” for one’s failures, not to mention picking on those weaker than you, is way uncool.

When Iwabe loses his temper and readies an earth-based weapon, he is quickly stopped by Inojin, who despite his earlier shade, gained respect for Boruto for defending Denki and proving through his skills that he’s not simply riding coattails.

When class reconvenes, Iwabe is right there behind Boruto, and they exchange cordial greetings. And Boruto is no longer unpopular, getting lunch invitations from many a classmate. Another peaceful resolution in a peaceful world. No one knows how long such peace will last, but they certainly can enjoy it while it does.

This spin-off of and semi-sequel to Naruto starts at the end, and in a pretty dark place with Naruto’s grown-up son Boruto fighting some baddie among the ruins of Konohagakure. Looks pretty serious and hardcore, but it is only a small taste of what will supposedly come to pass many years hence. 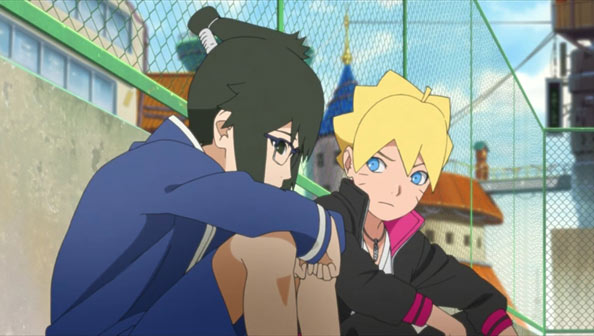 Rewind to when Boruto is just a little punk kid, on the eve of the Academy entrance ceremony. He spots a boy being bullied and later learns his name is Denki and he’ll also be attending the academy, but only because his father is making him as part of his duty as heir to the family business empire. Boruto can probably relate to dad’s casting long shadows, as his own is none other than the Seventh Hokage.

Back home we check in on Boruto’s little sister Himawari and his mom and Naruto’s wife Hinata. Seems like a nice enough house but if I recall correctly Hyuuga Hinata was and is a pretty large badass kunoichi, and frankly looks rather bored looking after the ol’ homestead while Naruto is buried under paperwork at Hokage HQ. But this show ain’t about the parents; they had their time in the limelight…fifteen years and 720 episodes’ worth, to be precise.

Naturally Boruto and Denki don’t simply arrive at the opening ceremony on time and get on with classes, because that wouldn’t be that exciting. Instead, Denki’s bitterness at being rejected by his dad causes him to be possessed by an evil aura, which Boruto is able to see with his trick right eye.

Denki sets it up so the bullies will get killed in a head-on collision of two trains (built and run by his dad’s company). Boruto gets him to snap out of it and cast off the evil aura, and with Boruto uses his clones’ combined reach to pull the switch that avoids the collision. Everybody’s safe and sound, and both Denki and the bullies learn a lesson and bond a little through their shared ordeal.

With that, all that’s left is to get to the ceremony on time, and Boruto and Denki just make it, by making one hell of a ridiculous entrance, aboard the derailed train car, which crashes into the side of Naruto’s face. Not his real face, but the colossal stone face carved into the mountain with the other Hokage. Symbolism, much?

This week is the Boruto & Denki show, sprinkled with a bit of Nara Shikadai, with naught but a cameo by Sakura and Sasuke’s daughter Sarada. The episode gets the job done: introducing the title character, demonstrating his considerable but still very-raw abilities and very familiar personality, and giving him a mission-of-the-week to carry out with Denki.

I’ll admit to dropping Naruto: Shippuden about two years in after completing Naruto, but there’s a nice fresh-start feel about Boruto, a newly-revamped take on an old, familiar world. The production values are higher than I remember (granted, back when Naruto started there was no widescreen or HD). It’s nothing fancy, and is by definition unoriginal, but there’s a inscrutable easy watchability to it nonetheless. Whether you’re a big fan of the franchise, a complete noob, or somewhere in between like me seeking ‘shounen comfort food’, it’s worth a quick glance.