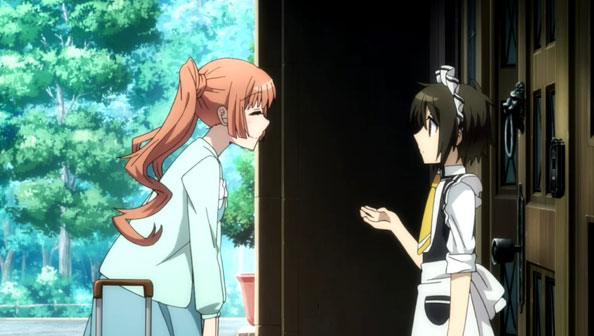 Like Tanaka-kun, Shounen Maid introduces a new female addition to the cast in the person of Ootori Miyako, who is arranged by her father to marry Madoka when she turns sixteen. The arrives at Madoka’s home having reached another impasse with her father, and we quickly learn she actually prefers Keiichirou.

Miyako wants to prove to Keiichirou that she can be a dependable woman and future wife, and after learning Chihiro’s story, decides he’s the best person suited to teach her, being pretty hard-working, dependable, and independent himself.

Predictably, things don’t go so well on the housework front, and though she has fine cooking skills, she makes a mess in the process. Her depression washes away at first sight of Keiichirou, but soon returns, only for her to be cheered up again when Chihiro tells her what his mom told him: compromise is fine, but don’t betray yourself by doing anything against your heart.

It’s not about being selfish; it’s about making your own choices in life, something everyone should be able to do in this day and age.

When Miyako’s father shows up to find his daughter and Chihiro a bit too close to Madoka for comfort, he drags her back home, but she returns again soon to continute her training with Chihiro. Overall Miyako is a pleasant addition to the cast, as someone both inspired and encouraged by Chihiro’s unique life story so far.

While generally feel-good in nature, this show is tinged with the grief of the premature loss of his mother, who was by all accounts a strong-willed but kindhearted woman who never looked down at her son or sugar-coated things. Sure, she put too much sugar in her tamagoyaki back when she made them for her brother Madoka back in the day, but by the time Chihiro came around, Chiyo was an omelette expert.

As part of a bento, tamagoyaki becomes a dish Chihiro decides he’ll practice and perfect, after trying to determine what, Madoka’s favorite food is. Even when he screws up the omelette on his first try, Madoka is reminded of his sister doing the same thing.

IMO there’s few foods better than nostalgia-evoking foods, for even if they remind us of someone who has passed, that’s simply proof a part of that someone is still alive in us. So having lost the one in charge of folded omelettes, he’ll strive to become a worthy substitute.

Shounen Maid seems like a high-concept excuse to, well, put a boy in a maid costume…for some reason, and so I wasn’t optimistic about this show from the start.

But when the titular future boy maid Komiya Chihiro attempts to burn the letter his recently deceased mother wrote him because it’s too vague, I knew we were dealing with something with a lot more wit and nuance than I initially suspected.

There’s also something great about introducing his uncle and new ward Takatori Madoka by showing him cowering in fear from a little puppy who got away from its owner.

Chihiro may be in elementary school, but he’s had to grow up much faster than most of his peers, both with a busy mother who was always away, leaving him to do the housework, and then dying, leaving him alone in the world…or so he thought.

In reality, Chihiro’s mother Chiyo chose exile from her very wealthy family in order to have and raise Chihiro—to live the life she wanted, not one chosen for her. Learning this makes Chi feel partially responsible for his mom’s death, which is ridiculous, but he is just a little kid, and this is a lot to take in.

I also liked how big and grand and imposing Madoka’s mansion is portrayed when Chihiro first arrives. His exposure to this kind of gaudy lifestyle is completely alien to him, but imbued in his personality is a desire not to accrue debts from anyone, even his uncle. 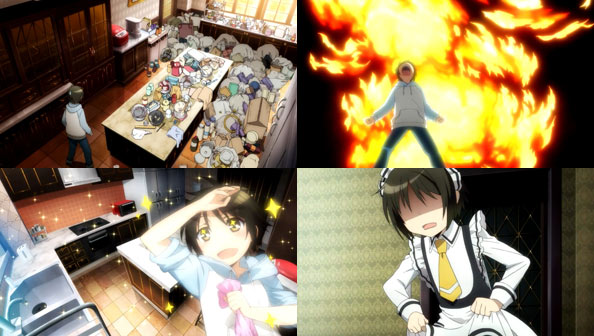 But more than big and imposing, Madoka’s manor is a pigsty of the highest order, something Chihiro learns by accident when hiding in the kitchen, then noticing the appalling mess. Detail-oriented, fastidious youth with a solid work ethic that he is, Chihiro pulls up his sleeves and cleans like there’s no tomorrow.

All the while, it’s clear he’s not just cleaning because he can’t tolerate messes (though that’s part of it); he’s also staying busy in order to not be a burden to anyone, as well as to take his mind off the fact he’s homesick for a home that no longer exists.

Inspired by his hard work, his Uncle Madoka makes him a frilly uniform, of a design informed by Madoka’s work as a costume designer. There’s clear contrast between Madoka’s carefree attitude and Chihiro’s serious-beyond-his-years, “Those who don’t work don’t eat” philosophy; both guys are products of their upbringing.

But when Chihiro is too exhausted to clean anymore, Madoka and his assistant Shinozaki Keiichirou take over, cleaning a room meant to be his. He makes them clean it over again when it’s not done to his satisfaction, but he appreciates the gesture and is glad, if a little overwhelmed by suddenly having a room and a (HUGE) bed all his own. This big, unfamiliar house is gradually becoming his home.

He also sees Madoka working hard on his costumes; often so hard he neglects food and sleep, so Chihiro fixes him a snack in the night. Sure, sometimes Madoka’s “hard work” is composed of indulgent little side projects like a cat mascot suit for Chihiro, but the arrangement that has been struck is beneficial to both parties. Madoka gets a maid (and occasional model), and Chihiro gets a home and a job to avoid feeling indebted.