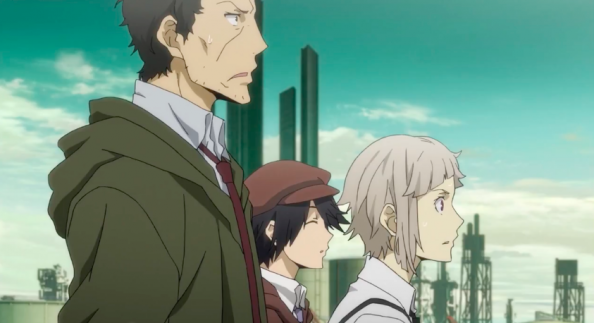 Last week, Bungou Stray Dogs disappointed because it lacked tension and it’s tone fluctuated wildly from cheeky to violent. It had no stakes and the characters faced no consequences. This week was no better. It was possibly worse.

What happened? Rampo, ADA’s master detective is sent to a murder scene and Atsushi is sent along because Rampo is useless at everything except crime detection. A new gruff detective is at the scene and he doesn’t know Rampo and doesn’t approve of using private investigators. After some dialog, he relents and Rampo reveals a random police officer at the scene actually committed the crime and a greater conspiracy ensues…

The payoff is, after all the reveals, Dazai tells Atsushi that Rampo doesn’t actually have an ability, and that he even touched Rampo to make sure. Dazai then explains how Rampo would be able to deduce many of the clues and Atsushi learns why ADA respects Rampo so much. 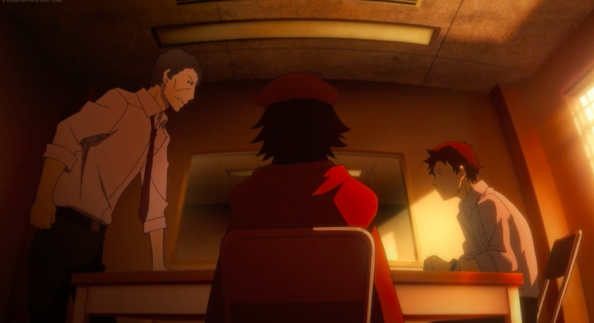 While the final reveal is clever, all the parts felt contrived or drawn out. The detective’s objections to Rampo feel like a contrivance to pad the opening act. Dazai being trolled out of the river felt like a contrivance to include him in the act and to explain things to Atsushi in the end.

Atsushi gets nothing to do except his shock-face routine and the actual case, the murder of a female detective, is so secondary that when the episode shifted to it in the second act (via a narrated interview of the police officer who killed her) I lost interest. This show is terribly ill conceived. 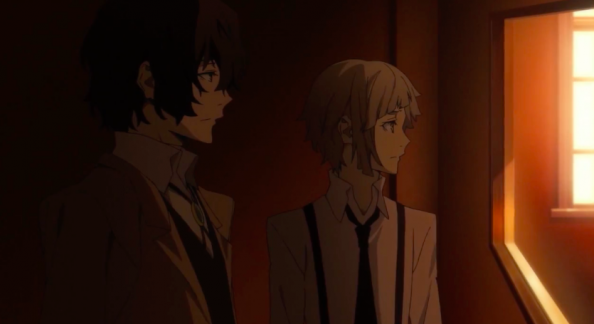 Lets get academic on the tonal issue: adding humor to a grim scene keeps the over all tone light but, when used masterfully, can paint a deeper understanding of the characters. Maybe they are cracking jokes as a defense mechanism, maybe they are deeply warped individuals how can’t feel anymore, or maybe the writers are lowering our guard so they can hit us with a really shocking point later on.

Unfortunately, Stray Dogs only purpose is to keep things light. The characters are too cartooney for a psychological message to be believable and, thus far, each episode has ended on a dismissively happy-go-lucky note. Even if a grim reveal will eventually come, the script has bled out all of its tension.

It doesn’t help that there is no comedy here either. Dazai’s one-note suicide humor was used up in the first episode and this week’s ADA member is just a narcissist who brags over a corpse about how good he is. All the snap-zoom shock-faces in the world can’t contort his lines into jokes. The punchline is there is no punchline. 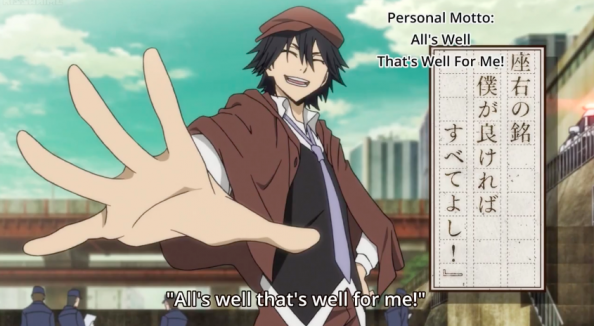 The verdict: Stray Dogs is a comedy without jokes. It’s an noir drama without any weight or humanity. It’s a super natural action piece soft on action and with a hard on for dull ‘resolve the plot’ super powers… which means the episode-to-episode plot isn’t compelling and the long term threat of the port mafia was so neutered last week as to make that unsuitable as an alternative.

I mean, what possible impact does knowing the murderer was dating the victim have after all that slap stick?

Beyond production values, there is absolutely nothing good about this show. It is not terrible but it is also genuinely bland or self defeating in every way. 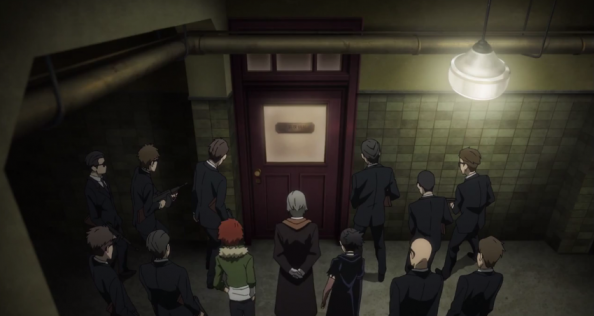 BSD4 is all about blind alleys and throw away asides that hide a very simple message: Despite their great power, the Port Mafia is no match for the Armed Detective Agency AND Atsushi finally has a place he belongs.

Dazai and Dracula are barely in the episode, Atsushi spends most of it trying to run away and protect his new friends (who don’t even know he’s doing that nor need him to do so) and the rest is given over to red-herrings about Kuni-chan being worried and introducing how bad-ass the Black Lizard squads of the Port Mafia are… only to have them immediately wiped out by the ADA. 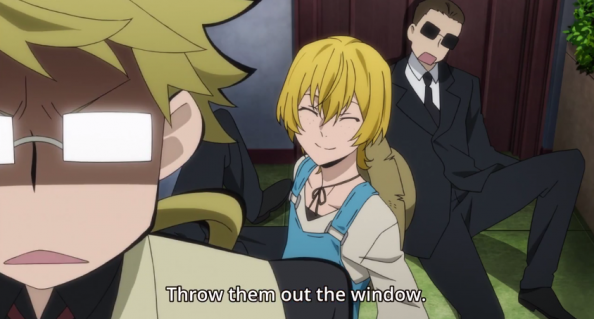 My concerns from last week are still in play: the show’s tone ricochets between slapstick and torture-grim, but there’s no tension because everyone important to the story survives.

Likewise, 15% of the episode is spent on mini flashbacks or repeats of information we’ve seen multiple times over. It doesn’t respect the viewer and for all the information stuffed into the play time, it doesn’t feel like much of it is valuable. It’s not all bad of course. The show looks decent enough, if not slightly over designed. The animations are decent enough, if only one scene per episode really pops out. It’s just trying very hard and I don’t really get a sense any of this has a point.

Certainly, establishing the big bad Mafia is no match for the ADA already makes it even lower stakes and less significant as a long term conflict. So what’s really left for the show to be about? 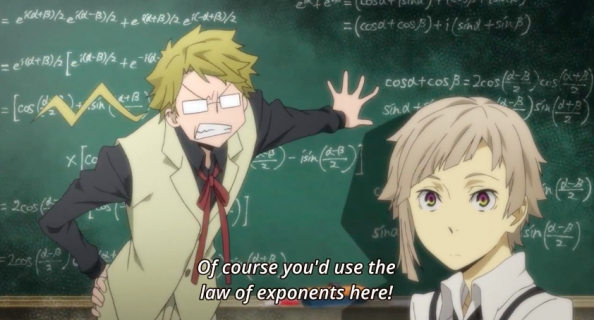 Between its mixed bag of animation quality, comically abrupt advancement of the plot and introduction of the show’s main villain, and jarring shifts in tone, Bungou Stray Dogs 03 was a complete mess… Bad dogs!

In scene one, Atsushi learns more about last week’s fake-out bomber and his ‘sister,’ as well as Kuni-chan’s background as a math teacher. He also learns Dazai’s backstory is a huge secret and there is a reward for figuring it out, which prompts an entirely unfunny scene where Atsushi lists random occupations and Dozai cutely says nope to all of them. 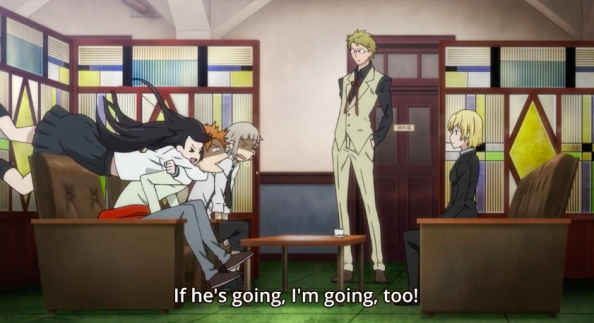 In scene two, everyone meets this week’s client, a knock-out blonde who’s company is troubled by ‘rag wearing’ persons up to no good in their alley. Dazai flirts around with the client until Kuni-chan beats him up and Atsushi and the lesser duo of last week are dispatched to help the client.

Also, Kuni-chan warns Atsushi to avoid Dracula at all costs. 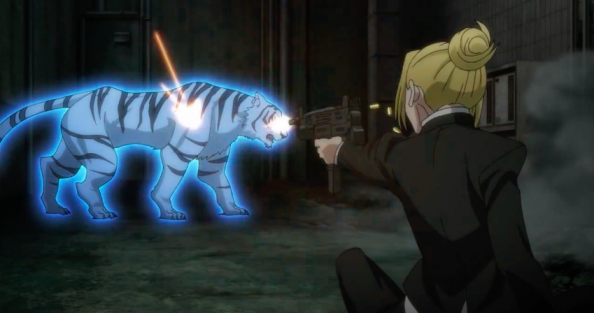 The second act is devoted to introducing Dracula, who it turns out is part of the dock mafia along with this week’s client. As the scene plays out, we lear about last week’s lesser characters, see their powers, and then witness them brutally murdered.

Then Atsushi turns into a Tiger and goes toe to toe with Dracula until Dazai shows up. They monolog at each other, explain that Atsushi has a 7 million Yen bounty on his head, and part ways amicably. Also, Dazai reveals he too was once a port mafia dude. 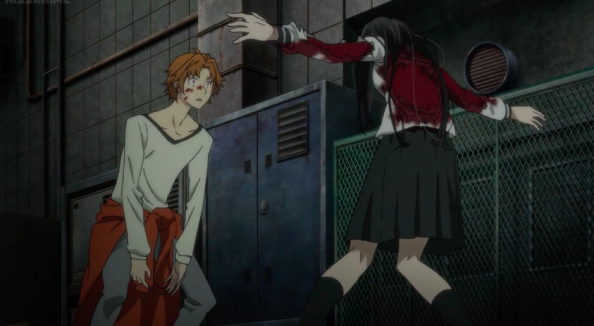 Where do I even begin? Dracula’s sudden arrival felt absurdly rushed. Similarly, this show is way too goofy for Dracula’s violent murder of police officers (and subsequent bombing of the police station).

The simple fact Atsushi’s fellow Armed Detectives are probably still alive, despite being gunned down just proves my point: the stakes are not high enough and the show is not serious enough to make violent drama fit.

If it weren’t for Atsushi’s cool dodging gun-play early in the fight, this episode would have been a complete snoozefest. 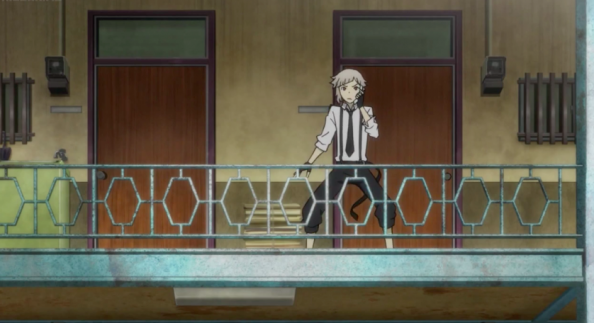 Nakajima Atsushi’s pleasant time with a roof over his head doesn’t last long: Dazai calls him on his new cell phone and informs him there is an emergency!

After a quick fakeout involving an oil drum and a failed suicide attempt, the duo joins Kunikida at the Armed Detective Agency’s head quarters and faces off against a mad bomber to save a hostage hostage. 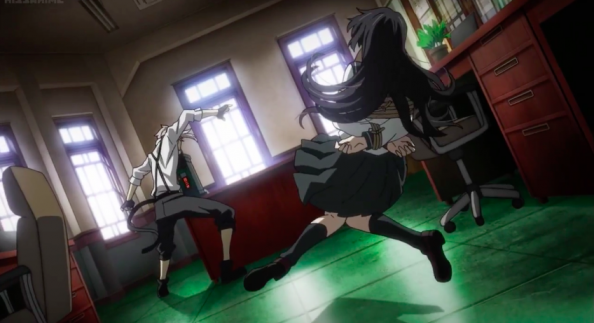 Slapstick ensues, the bomber gets madder, and in a final desperate act to save the day, Atsushi tries to smother the explosion with his own body…only to discover the bomb was fake and the situation was a test all along.

With the president’s approval, he is now part of the ADA, whether he wants to be or not. Roll credits…

…Until Dracula shows up in the sewer, probably up to no good. Those Draculas never are! 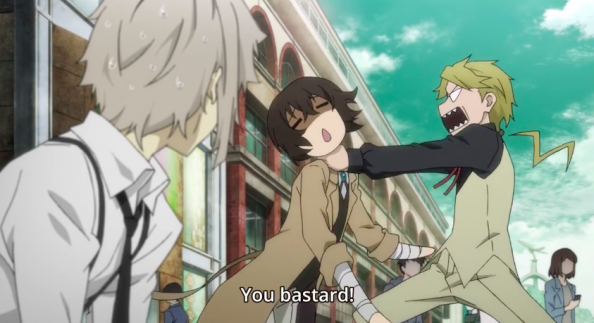 Bungou Stray Dogs succeeds for a second week, although at a lower action level and less witty humor. Dazai and Kuni-chan’s rock-paper-scissors showdown was charming, and some of Dazai’s expressions (like his spaghetti arms dance) earned a chuckle, but it lacked last week’s punch over all.

BSD’s color palette remains quite nice to look at, though it too was more exiting last week. The character designs are solid and Atsushi’s poses are especially bizarre in an angular sort of way. The goofy rock guitar in the background was either hilariously appropriate or terrible depending on your tastes.

But if I had to choose a single thing that bothered me, it’s Kuni-chan’s special power “Dopa Poet,” which appears to materialize a gas-cartridge-cable-firing-GUN from a piece of paper. Judging from the opening credits, this may well be all his power is good for and yeesh…that’s hugely unsatisfying as powers go. 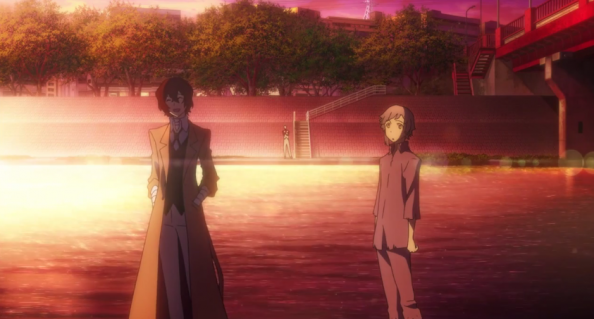 Nakajima Atsushi, recently chased out of an orphanage and about to die from starvation has finally come to realize he must turn to crime if he is to survive. He WILL rush the next person he sees and take everything they’ve got.

The first person he sees zips past on a motorcycle, followed by a company of marching soldiers, followed by a body floating down the river. Resigning himself, Atsushi-kun dives in after the drowning man and begins his adventure! 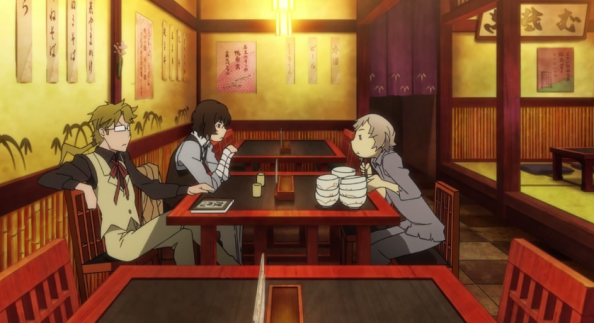 As it turns out, that drawing man is suicide-hobbyist Dazai, a member of the Armed Detective Agency, who’s shirking work and ticking off his partner Kunikida-kun, who materializes soon after.

Grudgingly, Kunikida pays for Atsushi’s meals but it is quickly revealed the detectives and the orphan have overlapping interest in a man-killing tiger that is causing trouble in the area and is most definitely not Atsushi himself. 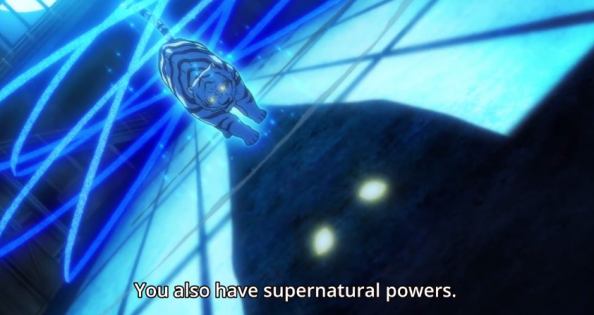 Later that night, Atsushi turns into a tiger in front of Dazai, who uses his own powers to safely immobilize the ignorant orphan and save the day. We meet the rest of the Detectives and they agree to add Atsushi to their ranks. 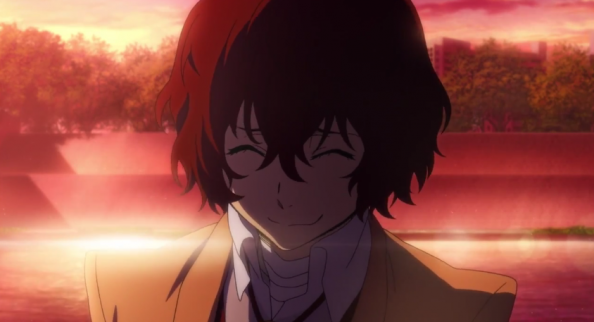 Bungou Stray Dogs succeeds in every way Sousei no Onmyouji fails: The render level and visual styling are not only solid, they pull off well timed jokes and present an emotional range for each character.

The characters themselves are likable and quirky. Even Kunikida-kun’s generic ‘Angry Uptight Dude’ fits visually within the world and, given Dazai’s entertainingly suicidal musings, you may even find his exasperation believable.

Supernatural team shows are a dime a dozen, but BSD does not disappoint. The rest of the cast and list of villains, which includes a Dracula, appears equally charming and quirky—but above all else, there’s no dour angst-bro in the driver’s seat here.

I’m looking forward to more of this and hope you have time to give it a look too!