Cyan Hijirikawa, a first year from class 3, wants to join her school’s rock music club but she’s too shy and ends up living in her imagination instead. Then she gets a high score playing pinball on her cell phone and is sucked into a magic scifi world here everyone is anthro and 3D rendered musicians fight dark monsters or have their music-skill-crystals sucked out and become dark monsters themselves.

Then she defeats a giant dark monster with a single guitar riff (using a heart-shaped guitar she unlocked in her pinball game) and signs a contract with a shoddy music studio run by an egg man.

SbR asks us: what would happen if TRON, Sonic COLORS and an Idol show had a baby with a ho-hum shy-girl high school rock music club show? The answer is, of course, is a schizophrenic but stylish mashup that just barely holds together as it lurches between rendering styles, characters, and worlds alike.

And I almost turned it off because the first 5 minutes are presented straight faced as a dull shy-girl-becomes-bold trope. Mind you, SbR would have done a decent enough job, even by that genre’s standards. I’m just not into that genre and 5 minutes is asking a lot of an audience that doesn’t know what it’s getting into.

You may enjoy it: if you like absurd and over the top style-first shows, with simple but up beat themes about love music and togetherness. Bros, blushing cuties, and ‘I’m gonna take you down’ (with my music) faces flash all over this thing.

The humor is also knowing, and almost clever at times. (egg man’s tour bus gets plowed by a limo so long it takes 2 scenes for the back window to reach our heroine)

You may want to avoid it: if over the top cute, blushing cuties, and bro-power gets on your nerves. This is ditzy girls and idol boys save the day through and through and, while there is obviously a tongue and cheek plot about the evil industry exec who brought Cyna into the world because she’s a master guitarist he needs to play the perfect song to take over the galaxy… well that’s the plot so if you don’t think that will be funny, run? Over all, the visual styles are great on their own but don’t mesh together. It comes close but the 3D is so glossy and that the 2D can’t integrate, no matter how saturated the colors get. Oddly, its worth nothing that the styles don’t overlap either — 3D scenes are fully 3D and 2D scenes have no 3D objects, which only further emphasizes their separation. 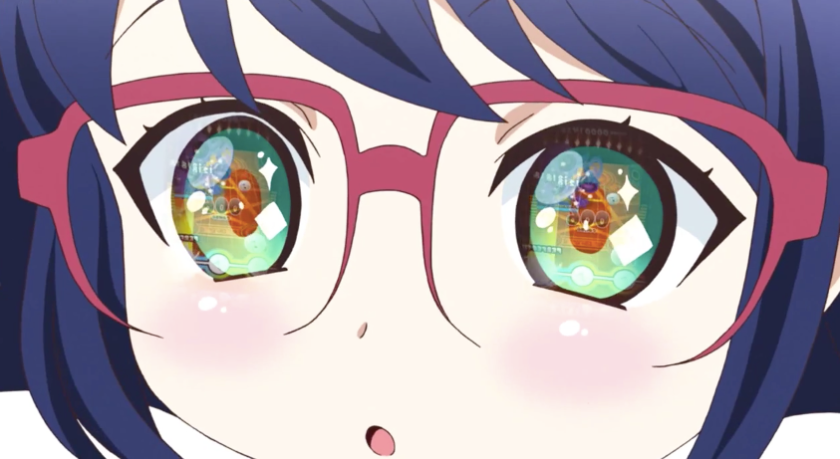 I went in blind and was both entertained and surprised by where Show by Rock!! went. I’m not sure I actually like it, and I don’t plan on reviewing it during the season, but its a fun romp and most likely worth your time.

If for no other reason than it’s totally bonkers.