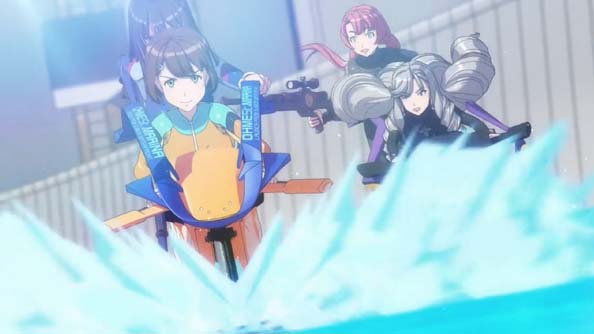 Why not devote 12+ minutes of airtime to Rin and Misa’s first jet ski race? Why not break the fourth wall nearly as often as the commentator’s and exposition break the momentum of said race? Why not swap awkwardly between hand drawn and 3D rendered versions of the girls while they race? Why not follow the race with balloon-bewbs!, more exposition, and some fat shaming?

Well… that didn’t take long did it? Where last week featured many puzzling design choices, which worked to elevate the material from slop to creepy psychodrama, this week couldn’t reach ‘slop.’ If you are earnestly excited by the made up rules to a water-gun shooting + jet ski racing sports anime, I guess you got something from it. Otherwise, not so much.

Rin is surrounded by a warmth as adults chat aimlessly and give us a glimpse of their family-like fishing community. Their world buzzes with detail but stands motionless. Not even a ripple ebbs near the boats docked at port. Not until Rin’s mother is announced as Jet Girl World Champion! As she speaks into without a sound, we zoom in close to her exposed chest and watch her gently wrest a hand above her heart. Rin mirrors this while dry-humping an oversized dolphin plushie beneath her.

Now grown up, teen-Rin saddles a jet ski, buffeted by sports graphics and announcer narration. A delicate smile dances on her lips and a yellow wetsuit like her mother’s hugs her ample curves. There is joy in her and her partner’s face as they ride from wave into the air, rising to the upbeat throb of the opening theme music.

Teen-Rin now sits in darkness before a picture of her trophy-holding mother at the family shrine. Rain and stillness hang like death in the air.

Elsewhere in the dark, a phone alarm wakes another girl. The emptily-chirping phone lays loose in her sleepless hand. Her eyes do not hide her depression. Her student’s room describes an empty life to us in clean but heartless stills. Pens not quite neatly arranged beside a pad on her desk. A simple mug holds her plain tooth brush by the window.

The girl strips for us and her young breasts bounce with natural weight, as if rejecting their sexual impact. The scene is almost silent, broken only by her sliding door sticking in it’s track. It fights to keep her inside before letting her pass. Misa Aoi is written on the name plaque as the hooded girl marches passed. 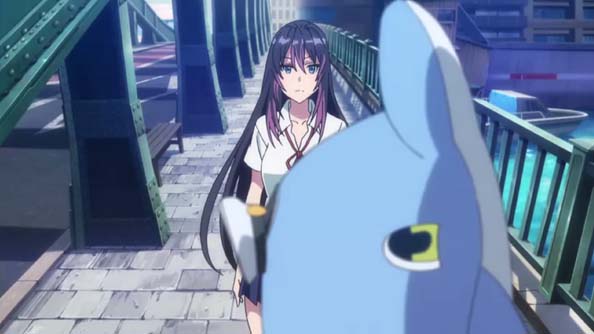 Rin now sits by her father at the docks, sharing empty chatter about moving to Tokyo for school and part time jobs. He stands there and does not look at her, nor do either turn to face us. We do not see his face. While the setting and color and coldness match, it becomes clear the girls live far apart.

A steam boats horn blares and music returns. In the distance, Rin now faces us waving. Briefly we come close to her smiling face, and as briefly see the smile slacken, her inner shadow cast long by the rising sun.

Misa dons VR Goggles and we see a machine’s hydraulics flex with her weight. We see a simulation through her eyes, and we see her eyes too, each we see tightly framed. Virtual water splashes but Misa never leaves the dirty wooden room. Nor do we see Misa’s projection into  the simulation. She can not see herself there. She curses, feeling the representation is lacking, and hurts her leg in anger. 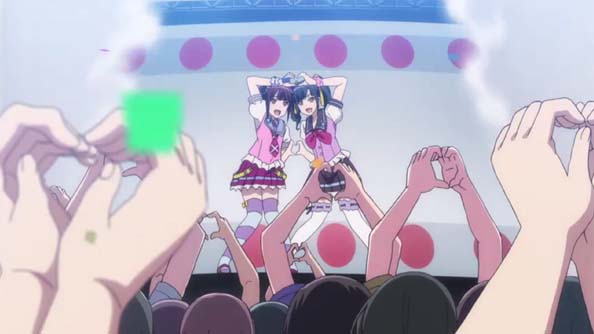 Rin returns, eyes wide and balled fists held together in surprise. Pair after hyper-sexualized pair, Rin encounters stylish Tokyo girls in love with each other. A foreign couple offers sepuku. Another, selfies. Later, she is mugged by a plain man, who is ultimately tripped by Misa a short chase later.

As Misa stands, Rin’s eyes trace shapely legs, lingering on the dress shirt,  and distant eyes. Rin’s hand returns to her heart, where it hasn’t been since her mother won the championship. Judging from the shrine photo, perhaps moments before she died. Rin exhales and blushes with glistening eyes and lust. Delicate piano keys finger a short rise. Unable to contain her excitement, Rin unzips her duffle bag and her dolphin plushie erupts forth like a skyward facing erection.

Later still, the girls become roommates. Rin attempts to make Misa touch her breasts before leaning in to smell Misa’s neck. She can smell Misa on their bunk bed. Misa violently pushes her away, disturbed but their name plaques now hang together. Rin’s childish mug and personal items sit next to Misa’s on the walls and desk.

The creeper factor runs thick with deceptive charming, as if Misa’s alarm over a sexual predator and stalker could be gently batted away by Rin’s playful grin, poking and chest rubbing. Misa eventually cowers behind a wall to hide, while Rin chats-up another student. The conversation is yet again inane, but introduces Rin’s Jet Ski experience within range for Misa to hear.

The episode culminates in a race against a river side mean girls, during which most of the sexual themes and azure colors are repeated with gusto. Misa is anally penetrated by rifle fire. Tears flow from her eyes. Her clothes detach and fall away.

Point of view impacts storytelling. Not only who’s point of view, but how they see (what angle, the framing, what they focus on) feed us details about their character and the world overall. In KJG’s case, we mostly share Rin’s point of view but the contrast of what that view shows us, and how people see Rin (a smiling happy girl played straight), creates a deeply unsettling juxtaposition. 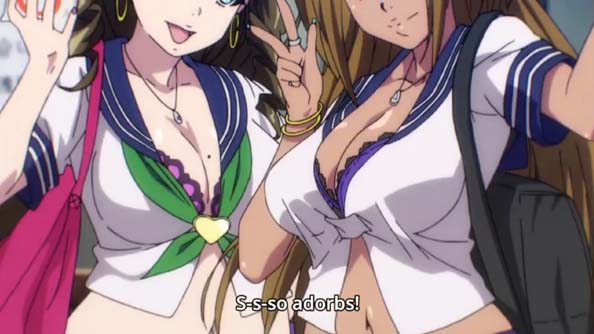 What makes any of this interesting is that Rin is not simply a ‘flip’ on a male anime creeper. Where most anime and manga would use creeper icons and conventional expressions like drool and ‘that elbows bent arms up wiggle gesture’ to convey Rin’s desires to the audience, KJG does not. Rin’s expression is played straight. In part, this hides her inner feelings from the other cast members as well, which in turn makes her feel dangerous because we, the viewers, are the only ones who can see more is going on with Rin underneath the surface.

KJG sprinkles other weirdness like suicide, the cheapening of Japanese cultural icons, and untreated (and socially ignored) depression. None of these are pushed to the forefront as much as the sexuality but the sexuality is obviously more the point: if you don’t think about how KJG presents itself, you could be forgiven assuming it was just cheap smut.