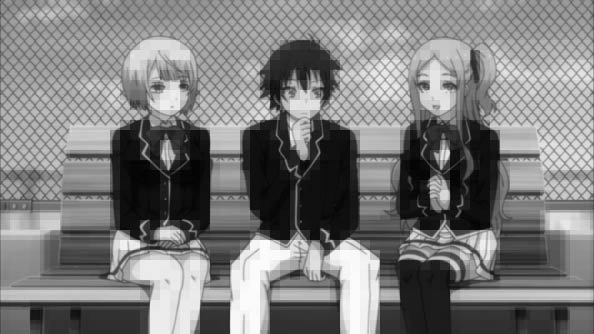 ShoBitch was never great, or even good. It was merely okay, and watchable in a nothing-else-is-on kinda way.

But after an episode that was less watchable—due to the addition of a sheltered rich girl with views on courtship every bit as quirky as Akiho’s and her mom’s—I’ve decided to cut bait.

Unlike Aho Girl, this is a full-length show, and despite decent voice work from Yuuki Aoi, the repetitive humor and predictable MC reactions just aren’t enough to keep me interested or coming back.

To even out the author responsibilities to four apiece, I’ll be taking over 3-gatsu no Lion reviews. Expect little change, as both Preston and I love the show—not to mention she initially took over the first season from me in a similar balancing maneuver.

Honestly, one of the worst things about ShoBitch is its title: it should actually be called Watashi no Kanojo wa Totemo Iidesu. (ほんとに私の彼女はとてもいいです。or My Girlfriend is Really Nice). Because Akiho is not a bitch! She just goes way beyond what is decent in normal daily conversation when it comes to analyzing her boyfriend’s sexual preferences.

Now we learn the reason she is the way she is: her mother Fuyumi gave her this “education.” Haruka learns this rather quickly upon meeting Akiho’s mom, while Akiho’s dad is essentially…Haruka, grown up. You can kinda see in his eyes that it’s been a lot of work living with Fuyumi, but the fact that every other aspect of her is perfect (like their daughter), he has no cause to complain.

In fact, Fuymi is almost too dutiful, to the point of making her husband feel like there’s no way he deserves someone so good. Then he remembers: not everyone could put up with all the innuendo…not to mention imbue their daughter with an almost identical attitude towards…that kinda stuff. 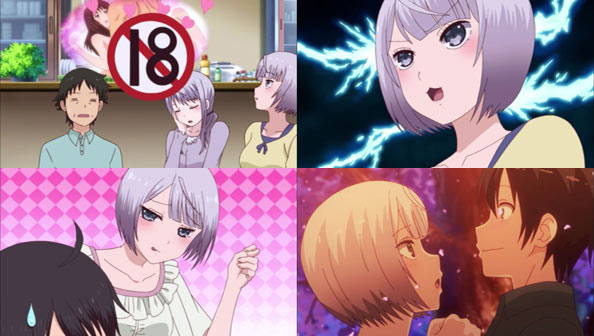 The day of Akiho and Haruka’s first date arrives, and Akiho predictably over-analyzes and over-prepares, to the point of deciding that 30 degrees is the ideal amount of head tilt to maximize her attractiveness to her man, which…yeah, Haruka doesn’t care about your head angle, especially when you’ve got such a cute outfit for the date!

Haruka runs into a bit of bad luck when across from him and Akiho is a real-life pervert with what looks like a blow-up doll-kinda thing(?), and Akiho takes comprehensive notes on both that and the movie they go to see, which is far raunchier than Haruka thought it would be.

That being said, Haruka, like Akiho’s father, is built for this kind of relationship, able to take any and all strange comments and requests, and only gently steer her back in the right direction of things veer off too far. Just being with her for the day made him happy, but that only makes Haruka feel bad for letting her research dominate the date.

Haruka says it’s no biggie; they can just go see the cherry blossoms on Sunday. The thought of another date so soon fills Akiho with joy, but she goes right back into her pattern of over-preparation, and she’s so anxious about the day she becomes sleep-deprived and even gets a fever.

After a trip to the (very inappropriate) nurse’s office and her mother picks her up, Akiho vows to get better for Sunday, and Haruka, not getting his hopes up, is shocked to discover on the day of their date her fever has disappeared. Let’s call it an efficient immune system, shall we?

Alas, most of the cherry blossoms already fell before they got there. Akiho is crestfallen, but again, Haruka reiterates that it’s no big deal (not a lot is  big deal to him, unless she’s on her knees before him in the school hall, speaking in a tone of voice that could be easily misinterpreted).

They can always come back next year, he tells her. Insinuating they’ll be together an entire year from now is awfully bold, but I don’t currently see anything getting in their way. I mean, look how happy Akiho is to hear that!

Speaking of ‘getting in the way’, I was glad none of the other girls in Haruka’s circle made an appearance this week; after the last episode I needed a break, and the show shines best when the lead couple is on screen. It was also neat to meet Akiho’s parents—It was essentially like looking into Akiho and Haruka’s future.

After Haruka learns Akiho is a lot less comfortable sharing an umbrella in the rain than walking in it and getting her shirt wet (revealing that she’s not nearly as raunchy as all the research she’s collected suggests), we spend a seemingly impossibly long time with Haruka’s moe sister Kana, who is really annoying.

She’s only a year younger than her brother, and learning he has a girlfriend is a shock. Thankfully, after meeting Akiho, Kana realizes it’s not the end of the world; indeed, after some posturing, the two get along swimmingly, much to Haruka’s relief (and after clearing up some misunderstandings)

Akiho is class rep, which means it’s her job to fire up the class to do a formal cleaning, which she does with a stirring speech that inspires the boys about not letting their rooms get so dirty their moms clean them and find their dirty mag stashes.

Akiho is very prone to misunderstandings, so when she hears two guys equate switching girlfriends to discarding trash, she gets very nervous. Luckily Haruka is a sentimental guy who doesn’t like to throw stuff out, but treasure his “personal belongings”, which she also takes as meaning she’s safe from being discarded.

After watching an anime perpetuating the girlfriend making lunch for her boy, Akiho exposes one of her weaknesses (besides taking almost everything anyone says or does the wrong way): she’s a bad cook. What a shocker! Interestingly, Haruka doesn’t even get to try the eldritch abomination; Akiho keeps it away.

Instead, after seeing how good Shizuku is, she begs her senpai to be her cooking master, and in between the inappropriate arrangement of vegetables and the use of many a double entendre, they whip up a mean pot of beef stew.

When Shi asks for Haruka’s banana for desert, he seemingly calls her bluff, making her flustered…but he’s really just giving her his banana (this was a stretch, as they’re in Shi’s house, so they’re her bananas, surely).

Haruka walks Akiho home, but it’s raining again. Both have their own umbrellas, but Akiho decides to take a little step forward by pretending she doesn’t, so she and Haruka have to share, and walk close together so as not to get wet.

ShoB***ch is the definition of pleasant, lightweight rom-com fare. I still found Kana and Shizuku a bit too intrusive this week, and I’m hardly optimistic about the prospect of still other girls entering Haruka’s orbit, gumming up the works. While they’re tolerable at the moment, the show shines when it’s just Haruka and Akiho, with Yuuki Aoi delivering a nice low-key performance with the occasional burst of passion. 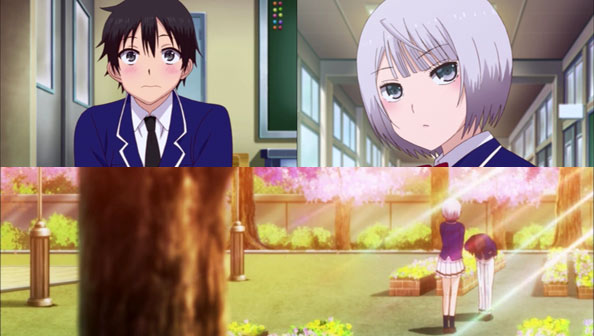 Shinozuki Haruka finally summons the guts to confess to the beautiful class rep Kousaka Akiho (an excellent Yuuki Aoi). To his surprise, Akiho immediately consents to be his girlfriend. So this is going to be one of those romantic comedies where the MCs are already a couple, not trying to be one.

Comedy, then, will arise out of the contrasts in how they view one another as people, as well what they each regard as a “normal” romantic relationship to be. It’s both their first romance, but while Haruka is fine with taking things nice and slow, Akiho…well, it’s not that she doesn’t as well, it’s just that she assumes that as her boyfriend Haruka will want more.

It’s just that Kousaka Akiho has clearly taken to the role of girlfriend with the same care and fastidiousness that net her the class’s highest test scores. She’s done her homework…but her self-training needs to be adjusted from “TV-MA” to “TV-PG”. 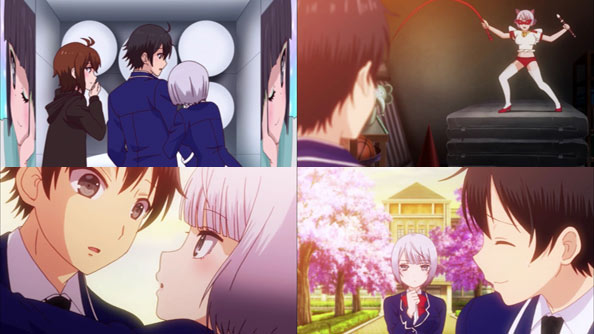 That being said, I enjoyed her deadpan delivery of all sorts of sordid things—as well as Haruka’s reactions, which range from bashful to exasperated. The bits are quick come in quick succession in a satisfying rhythm, whether it’s between Haruka and Akiho, Haruka and his childhood friend and “big sis” Shizuku, or all three.

Shizuku has a lot of fun teasing Haruka by not leaving him alone, and one would that by getting himself a girlfriend he’d have to endure a little less of her teasing, but for the moment her primary goal is to get the two a little bit closer.

Unfortunately for Haruka, Shizuku only reinforces Akiho’s inaccurate assumption that she must be always think of ways to maker her and Haruka’s relationship more “extreme.” Haruka manages to get through her head that he’s not like that, and that the two of them get to choose the pace, not Shizuku.

That’s a triumphant moment, because it reveals (if it wasn’t already apparent) that Akiho herself would prefer a less “extreme” pace to their courtship—though she’s sure to keep surprising him with the things she’s researched about romance.

I’m not 100% sure what “ShoBitch” means, but it sounds like too harsh a term to describe the docile, intelligent, thoughtful Akiho. In keeping with its off-putting title, My Girlfriend is ShoBitch toes the line between charming and overly indulgent.

While unlikely, it’s not preposterous that a studious, socially awkward class rep like Akiho could develop an “advanced” (i.e. more adult) ideal of romance (to match her advanced academic facility), and the one guy bold enough to ask her out would be both rewarded and tested. This is worth another look.