Tri-Cool, continues from last week’s on-stage challenge between Haneru and Kanon’s “Cool Dragon Dash Rising Brilliant Crew” and Kumo and Mizuki’s “Tribal Soul”. Kanon is nervous, never having performed in front of an audience, and neither of them really know what they are doing, but the audience is surprisingly enthusiastic.

We learn about some of the rules for a dance off and, after Haneru and Kanon ‘lose,’ we get a little more explanation as to why the audience thought Tribal Soul was better.

Haneru jumping vertically out of the frame again… down boy!

Basically, Tribal Soul was more in sync with the music, even though CDDRBC’s best moves were, well, better.

Regardless of the outcome, everyone is happy, the crowd only makes noise when encouraged to do so, and I have to wonder if Japanese audiences are just more polite than ours because, in my experience, this would have been a mean spirited, jeering filled, bottle throwing event. 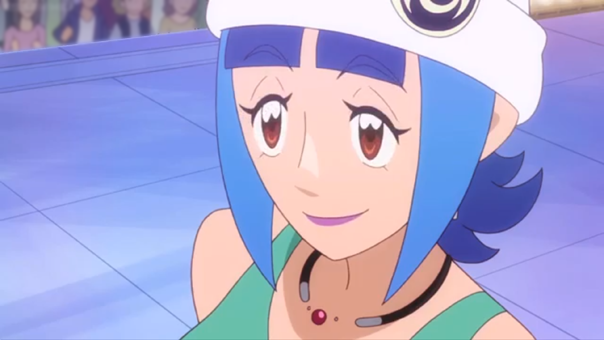 Tri-cool is as cute as ever. It’s pepper under dog fueled never give up spirit is satisfying and harmless. It’s also, very very very obviously, kid stuff.

And like super sweet breakfast cereal, at my age, a single bowl is more than enough. Thanks for the happy highs Tric-cool! Best of luck. Old-man out!

Tri-Cool, as it calls itself at various times, pauses a moment from last weeks E & speed-fueled dance party and good vibes to remind us that people are also dramatic. People can get sad and not be able to do the fun things the want. Even people full of crazy dance moves!

Kanon, aka Rhythm, is from a composed, appropriate family. It is unspoken, but given how seriously into controlled flower arrangements her mom is for their home, it doesn’t have to be stated: Kanon’s rents would fa-fa-fa’lip if they knew she was dancing.

Sorry Haneru! No dance team for you!

Also, there was a moon walking kappa. (Though he was not a kappa later)

There were also group names proposed like “Cool Dash Rising Brilliant Dragon Crew!” Which Kanon doesn’t understand but Haneru assures her it has no meaning.

As before, TCC episode two is a machine that only exists to make charming, occasionally funny, dancey silliness. Describing it as good would miss the point. I’m not even sure it is good!

Peppy dance music, free running, stylish and detailed character designs and a stylish world too: Tribe Cool Crew lays on the charm and happy energy as thickly as its plot is thin. 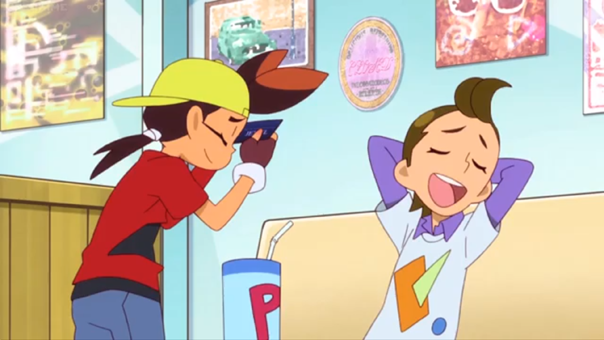 Part Sonic the Hedgehog, part arcade rhythm game, part ’80s throw back, Tribe Cool Crew is such a mash up of things I wouldn’t normally like that I’m completely stumped why I don’t. It just takes itself seriously about not being serious at all. It owns its goofy world and that world is fun, friendly and full of happy people.

That happy vibe is stunningly infectious.

What are its blemishes? We’ll, the sudden shifts into rendered 3D during complex dance routines both work and are jarring. Also, the plot is about Haneru, an all energy 7th grader who loves dancing in a private place and Kanon, who appears to be a wealthy over achiever who watches him through a one way glass and also dances and has fallen for Haneru.

It’s also about Haneru loving a dance sensation and having tickets to go see that sensation’s live show. So… the plot isn’t very interesting or important.

I just found watching Tribe Cool Crew cathartic. The constant movement is a treat and the show just revels in its characters do that without dialog. Without interruption. If only the post Sonic & Knuckles Sonic games had been this much fun!