Well, I was right: the show entered its element, as after thirty-eight days of milling around, flirting, and playing catch, on day thirty-nine all hell breaks loose aboard Annex One, as terraformars appear out of nowhere and start wrecking up the place (and the people). Now it makes sense why U-NASA recruited a guy who could hold his own against a bear in a Thai cage match!

But herein lies the catch, and it’s a pretty big one: this show wants to show a lot that the network censors won’t allow. As a result, so much of the dismemberment and gore is totally blacked out, you can barely tell what the heck’s going on, which kind of kills the intended intensity of those scenes. I’ve a strong constitution for television violence, and can’t help but feel like I’m not missing out on the creators’ vision.

As for the terraformars, they’re exceedingly dumb-looking. They manage to be terrifying anyway due to their size, strength, and inability to be brought down by huge guns, but they’d be a lot more terrifying if they didn’t have such goofy designs. For the record, I prefer Aliens to Predators, because the Aliens are just less humanoid in characteristics, and thus scarier to me. Ditto the briefly-seen aliens of Independence Day.

Still, once the bugs appear, things go downhill quickly, especially when they destory all the precious medicine required to fight them. It’s all very bloody and hopeless…and I reiterate: they’re not even on Mars yet! Meanwhile, back in Japan, U-NASA employee and JSADF Major Hiruma Shichisei, finds a researcher from the Bugs 2 Project tending bar in Saitama, seeking information he’ll use to “protect Japan.” Major, after seeing what those bugs can do, good luck – you’re going to need it. 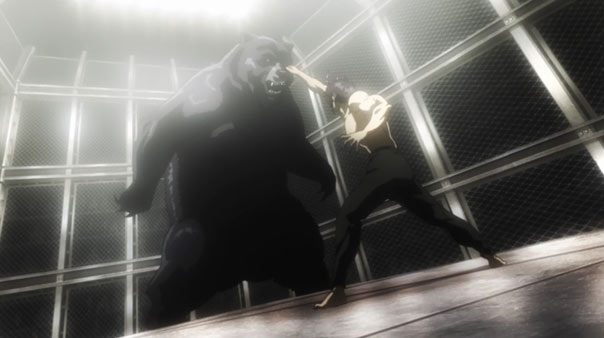 Curiously enough, this show begins with an underground cage match between a very muscular human (not a maiden fair) and a giant bear, held deep beneath Bangkok for the amusement of the super-rich. Hizamaru Akari isn’t doing so well, until he remembers why he’s in that cage: so his beloved childhood friend Yuriko can get a life-saving organ transplant, but even when he “hulks up” and wastes the bear, almost Ghoul-style, his handlers don’t do it. Yup, even in the 27th Century the rich are still assholes.

Instead the richies “sell” Yuriko to a couple of sunglasses-indoors-wearing characters, Komachi Shoukichi and Michelle Davis of U-NASA, who regret to inform Hizamaru that they tried to save her but simply got to her too late. Hizamaru is wracked with guilt and grief, but they give him an opportunity to see to it no one has to go through what he and Yuriko did again, while saving the world in the process. That means traveling to the place where her virus came from: Mars.

Upon resting and recovering from a surgery to toughen him (more than he already is) for what lies ahead, Hizamaru meets some of his colleagues, about half of whom are statistically dead already, including the trio of friends Marcos, Alex, and Sheila, along with negative newbie Eva Frost. They make up part of a group of one hundred that comprise the third expedition to Mars, the first two having ended in failure. The virus is believed to be capable of eradicating all of humanity, so developing a vaccine is of utmost importance, which explains the not inconsiderable resources of U-NASA.

Of course, Mars isn’t just red dust; it’s been partially terraformed over the centuries by shipping algae, moss, and the highly resilient cockroach. Naturally, those cockroaches have evolved in no time at all into gigantic terrifying monsters who’d just as soon squash a human as a human would squash a roach back on Earth. So it would seem both the virus that threatens extinction and the titular “Terraformars” they must fight were originally created by humans in the first place. It’s a big mess, and it’s up to Hizamaru and a ragtag group of tough guys and gals to clean it up.

We’re in for something totally different thematically speaking next week, be it the space voyage or their arrival on Mars, so as this first episode was more about introductions and exposition, I’m delaying my decision to review this show until I’ve seen it in its element. That said, this wasn’t a bad start, if TF keeps maintains its irreverent tone, “aw shit, what now” milieu, and amusing U-NASA camaraderie, I’ll forgive the uninspired character design and highly-censored (and thus somewhat pointless) gore.