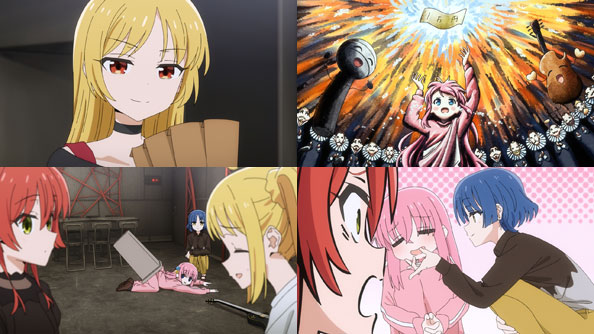 Seika distributes the girls’ pay, and for a moment Bocchi dreams of all the nice things she can spend it on. Unfortunately, she forgot that every one of the 10,000 yen she received goes into the band’s quota fund.

When Nijika lists all of the bands other expenses down the road that will necessitate second jobs in the summer, Bocchi retreats to the nearest trash can, then looks for a sketchy online website that buys livers from minors.

But in addition to receiving their first pay, Ryou has big news: she’s finished their song. Once she read Bocchi’s lyrics, the music just poured out of her. As thanks, Ryou gives Bocchi a chin scratch that makes Ikuyo green with envy. All that’s left is for Nijika to ask her sister for a slot for them to play. 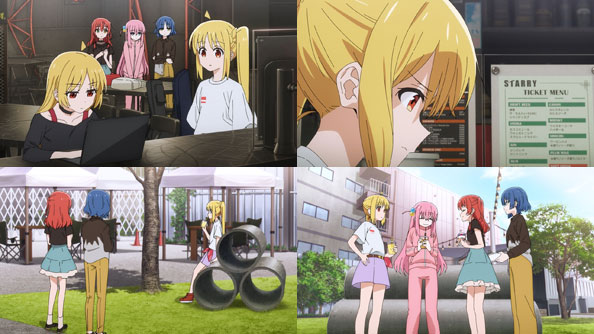 But what she thought was a mere formality turns out to be a firm obstacle: Seika won’t book them. She only made an exception the last time so Nijika could make a memory, but doesn’t sugarcoat things at all when she says she can’t have a repeat of “that awful May performance”, and tells Nijika to stick with it “as a hobby.”

Nijika storms out of the club, and Ikuyo insists that she and Ryou run after her. Bocchi starts to follow, but is held back by Seika. When she rejoins her bandmates, she tells them what Seika told her: if they want to perform on stage, they’ll have to audition in a week. That means Bocchi has to get better at playing in a band and Ikuyo has to get better at playing period. 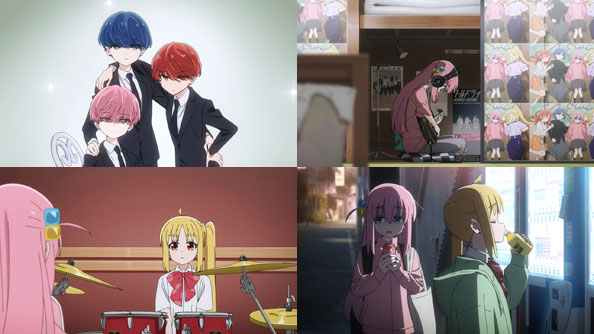 Nijika and Ryou believe they’ll be fine as long as they show her sister that they’re “bank-like”, which for the whimsical Ryou means dressing up in suits and mop-top wigs. But as the week of practice proceeds, Bocchi thinks long and hard about what she’s trying to accomplish now that she’s in a band, and what “growth” means beyond simply exerting a lot of effort.

Nijika misreads Bocchi’s distraction with these big questions, and after their last practice before the audition, catches up with her at the vending machines, buys her a cola, and apologizes for roping her into a band without asking her what kind of band she wanted.

Bocchi assures her she’s not doing this against her will, but still won’t tell her that she wanted to join for fame and adoration. By the same measure, Bocchi knows Nijika wants to play at the Budokan, but Nijika has a dream beyond that, which she’s keeping secret for now.

I really liked this scene both artistically (the light of the vending machines is both dramatic and warm) and as a sign that Nijika and Bocchi are still relatively new friends, and still have a lot to learn about each other. That will happen in time as they share more experiences. 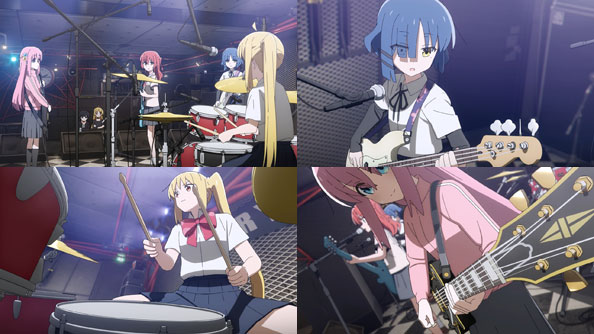 The day of the audition arrives, and I felt a pit in my stomach for the girls as they took the stage. It’s the first full song we get to watch the band play, and after four episodes and change, it feels momentous. The performance animation looks great, and more importantly the band sounds great … but crucially not too perfect. There’s plenty of room for polish.

As they play, Bocchi asserts that she’s grown from someone who wanted to become famous for herself, but now that she’s in a band and has friends, she wants to help them achieve their dreams too. Beyond personal motivation, she doesn’t want to let them down or be a weak link.

Infused with that passion to lift herself and the others, her stage play takes a noticeable step up in quality. She’s able to enter a zone where she’s comfortable enough to play almost as well as she plays when she’s recording covers in her closet. A previously private Bocchi, now performing in public and turning heads, just like she dreamed. 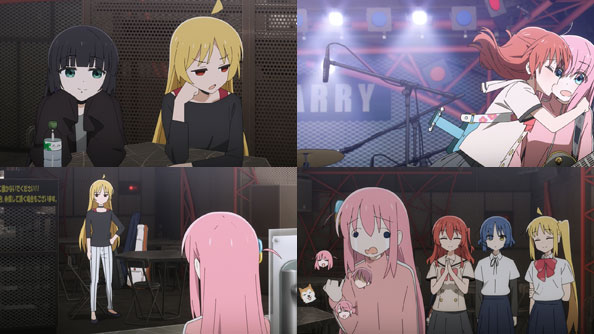 Granted, the heads she turns are those of Seika, P.A., and her bandmates, but you gotta start somewhere! When the song ends and everyone is catching their breath, Seika starts with criticism—the drums are too tight, the bass is too distant, etc.—before noting that she now knows what kind of band they are. That means they pass!

The ordeal is so taxing on Bocchi that the show has to cut to live-action video of various Japanese dams while she boots next to the stage. Turns out Seika is a big ol’ softie who had an open slot for her sister’s band all along, but didn’t want to make it too easy for Nijika. She challenged them to work hard and play their butts off, and they did.

Seika also wants to try to encourage Bocchi and further unlock talents being held back by lack of confidence. But in what’s looking like a penchant, Seika’s attempt is worded so that Bocchi misinterprets her “I see you, okay?” as a threat, not a supportive acknowledgement.

While Bocchi panics over having one family member short of the five-ticket quota (two, if you don’t count her dog) the bottom line is shit is starting to get real for Kessoku Band. They have a song, and another on the way, and they have a venue and slot for their first concert as a unit. It’s not “all over” at all!