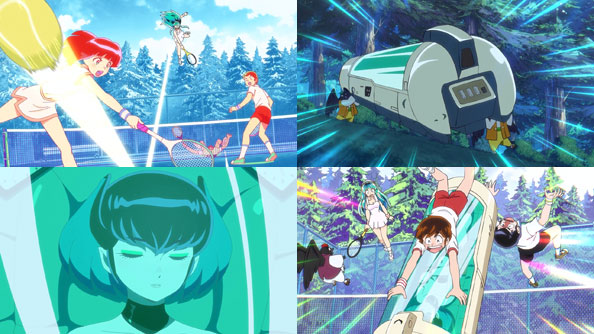 Ataru and Lum are playing Shinobu and Mendou in a spirited game of doubles tennis, and Lum ignores pleas not to cheat by flying. Her resulting point soars so far it smacks one of the tengu crows carrying a capsule containing a slumbering space princess. It slides down the hill and flattens Mendou, and Ataru pounces on it as soon as he sees the face of the occupant. 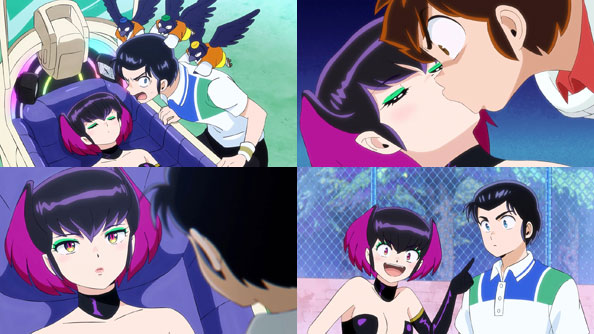 The crow attendants are impressed not with Ataru, but with Mendou’s “slicked-back” good looks. They believe he’ll be the perfect mate for their Princess Kurama to engage in “amorous congress” with. They urge Mendou to kiss her so she’ll awaken and get down to business.

Naturally, Mendou is a little hesitant, but Ataru isn’t, and steals the kiss. Lum immediately zaps him into the stratosphere, so the first thing Kurama sees is Mendou’s handsome mug, and assumes he’s The Guy. 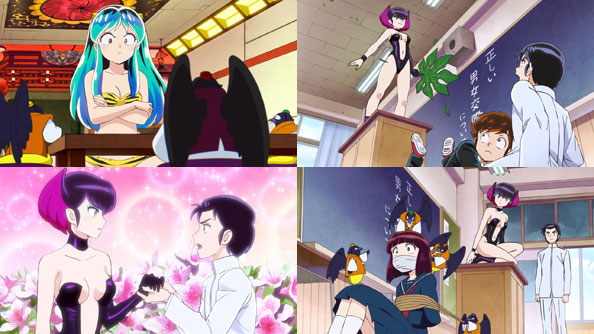 The four crow attendants are fine with this, but their elder is against it. Tradition dictates that the one who awakened her with a kiss become her mate, and that’s the Ataru clown.

The others want to keep that a secret, and so does Lum, who agrees to help them ensure the princess ends up with Mendou. Kurama then arrives in class and is all over Mendou, causing a huge uproar among his many admirers. Both Ataru and Shinobu try to tell her the truth, but are tied up by the crows and Lum. 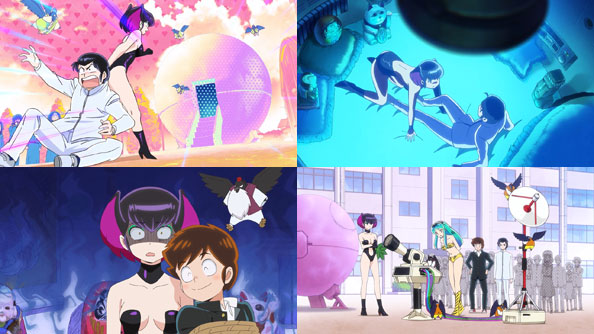 Lum and the crows then set to work building an impromptu “love nest” right in the schoolyard, into which Kurama drags a still-hesitant Mendou. While he recognizes her beauty, he still feels things are going way too fast. That’s when Ataru drops in, still tied up, to tell Kurama the truth: he kissed her.

The elder crow backs this up and says tradition must be adhered to. But when Kurama asks specifically why that is and what the consequences are, he has no idea. So the crows set up a device so he can confer with the past elders of the past of their homeworld. 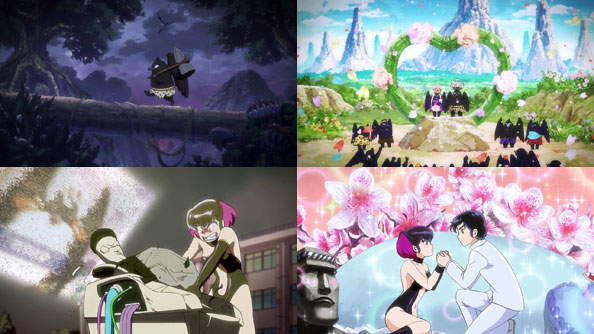 The elder ends up going back to the very first elder, who admits to having created the tradition from whole cloth simply because it was the way he met his own bride after a long and exciting adventure.

At the news of this, Kurama smashes the miraculous device and says to hell with such a sappy, meaningly tradition. She storms back into her nest, and Mendou follows her in to commit himself to her as her groom. 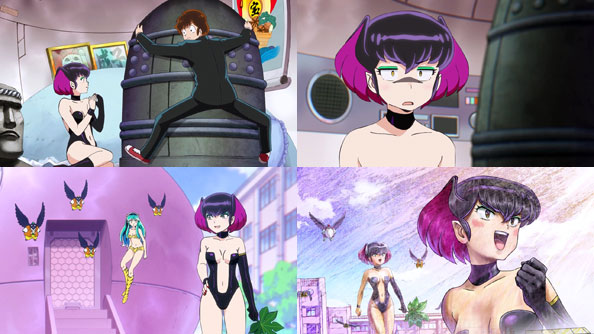 That’s when Ataru puts a big ‘ol record scratch on their moment by dropping a giant temple bell on top of Mendou, sending him into his darkness basketcase raving mode. Kurama is instantly put off by such a pathetic display and leaves.

Freed from what ended up to be a capricious and arbitrary tradition, she’s raised her standards for who should be her husband, and sets out to find someone who “checks all the boxes”, marked by an inspiring postcard memory.

Princess Kurama is another fun new character with a cool, striking design and voiced with exquisite haughtiness by Mizuki Nana. I also enjoyed her crew of adorable doting crow tengu. While I salute her for washing her hands of Mendou and Ataru, the fact she’s just as shallow as they are suggests she won’t enjoy the best luck in her pursuit of the perfect man.