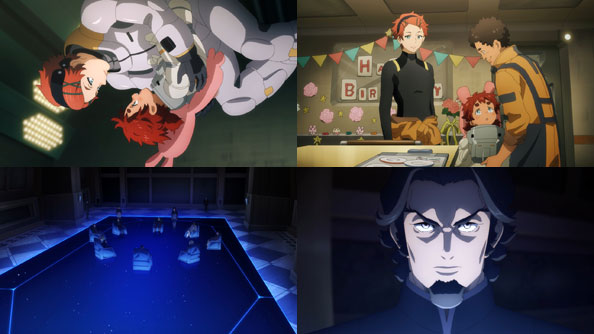 This prologue for the newest full-length anime installment in the venerable, 43-year-old Gundam franchise is a perfect balance of worlds small and large. In the former, the Samaya family (mother Elnora, father Namid, and their four-year-old daughter Elricht) are just living their lives, trying to make  space more habitable for humans through the development of the newest Gundam suit Ifrith (i.e. Ifrit).

Their asteroid base home’s name has mythic resonance: Folkvangr, the field ruled by Freyja where half of those who die in war go, the other place being Valhalla). It’s a small, tight-knit group, and it’s little Eri’s fourth birthday. But beyond this little haven that may just hold the hope for mankind, the larger world is scheming to eliminate them and their efforts—the classic Ominous Circle of Old Dudes in a Dark Room. 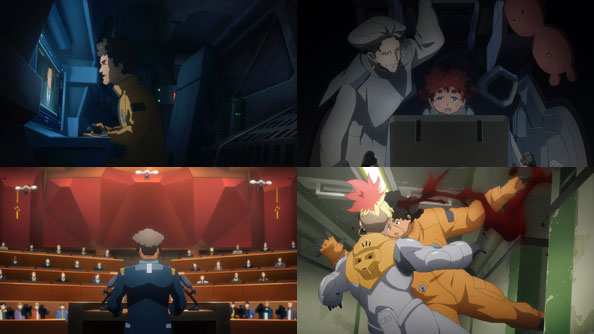 The Samaya family are cought between a council that has ruled that further development of Gundams must cease immediately. To his credit, the leader of this effort, Delling Rembran, believes that merging man and machine the way Gundams do is an affront to the natural order of things. He does not celebrate violence, murder, or war, but insists that human hands do the killing.

Of course, in his condemnation of Gundams as a technology that claims the lives of its users as well as its targets, he kind of elides humanity’s history of necessary sacrifice, on scales both large and small, for the benefit of scientific advancement. Regardless of how lofty his ideals, the bottom line is he’s sugar-coating a plain old massacre of civilians at Folkvangr. 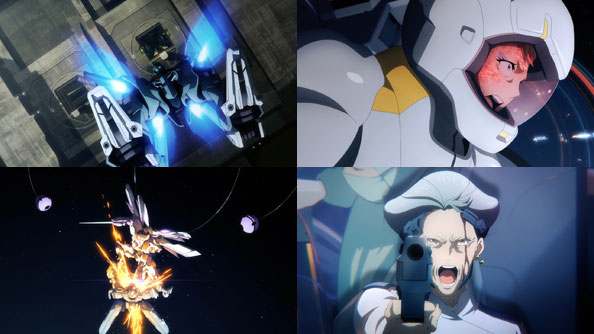 Mother, father, and child are all separated when the siege commences, with Delling’s Dominicus (i.e. dogs of God) units carrying out the slaughter. Elnora, the pilot of a still-in-progress Ifrith, reunites with Eri in the cockpit, where Dr. Carbo Nabo, Elnora’s savior, mentor, and Gundam project lead (as well as Eri’s “granny” had been showing Eri around.

Eri’s dad Namid sorties in a less sophisticated LF suit and is soon followed by Wendy, who wishes to avenge her colleague who was murdered in the Dominicus raid. We see how the GUND tech takes a physical toll on their bodies, and the enemy’s ace mobile suit Beguir-beu is has a power-draining ability that leaves Wendy’s suit powerless before blowing her up. 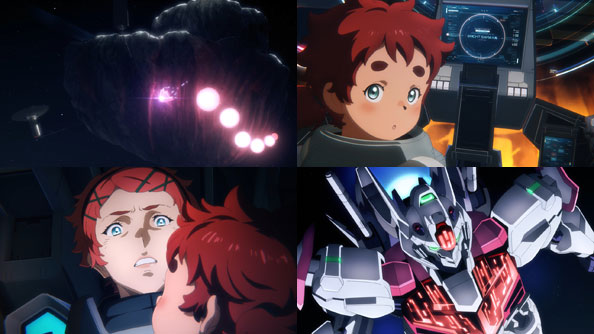 Delling’s ultimate goal is to blow Folkvangr out of the stars, and with it all of Carbo Nabo’s new Gundam tech. But the raiders miss the most important target: Ifrith itself, where mother and daughter reunite. To her mother’s surprise and horror, her little Eri’s biological signature is able to “awaken” Ifrith to Level 33, enabling full functionality.

Using Ifrith as an escape pod, Elnora sorties with Eri, and the show’s flagship Gundam dazzles the stage. Eri, who considers Ifrith her “little sister” is just happy that sister finally turned in bed woke up—on Eri’s birthday, no less—but once leaving the warm, safe confines of the asteroid, Eri and Ifrith are officially in the crossroads between big and small worlds.

Thanks to Eri’s inadvertent input, Ifrith puts on a show, making quick work of the enemy’s less mobile suits. When Beguir-beu draws in close and starts to do its power-drain thing, Namid comes between them and goes into fatal overdrive to force Beguir-beu away, giving his wife, his child, and maybe the only hope for sustained human survival in space a chance to escape.

It’s the kind of noble heroic sacrifice ordinary people make every single day in our world, even if it will end up robbing Elricht Samaya of her father so early in her life, the alternative would have seen Eri dying too. Namid tearfully singing “Happy Birthday” and Eri singing along, provides a heartbreaking capper to this, the first act of what felt like an epic, operatic film.

A glance at the MAL page shows that the show proper will likely pick up with Eri a woman grown, carrying on her parents’ and granny’s legacy. This isn’t about developing weapons, which the likes of Delling believe are the only good, right, or just use for Gundam tech. Without this tech, Elnora would have died and Eri wouldn’t be born.

No doubt Eri will be the champion of the underdog, the little guy in the little world, the engineer or scientist who just want to make life better, even if the costs are excruciatingly high. And no doubt she’ll butt up against that big yet small-minded world trying to stamp that out to protect their own narrow and ultimately self-defeating ideals. In other words, it’s an all-new Gundam, and I am hyped up.