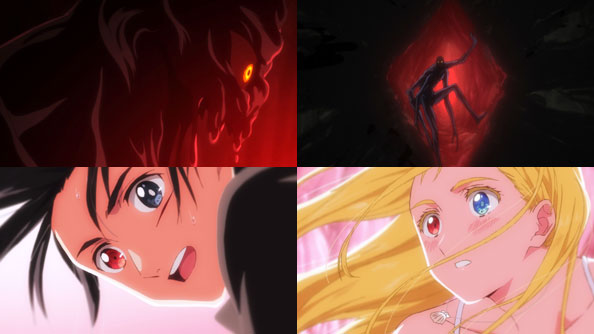 Haine has devolved into an eyeless, helpless child that Shide apparently has no further use for. But he does want her Observer’s Right Eye, which is now in Ushio’s head. He provokes Ushio and Shinpei into following him to through a tear in the cave wall into another dimension.

Ushio tells Shinpei if he goes in he’s not coming out, but with both Ryuunosuke possessing him and her by his side, he’ll be fine. But even if things go pear-shaped, he hastens to tell Ushio he loves her, he wants to be with her, and he will never leave her side again.

The remainder of the episode takes place in a thoroughly weird—and hauntingly beautiful—dream world: Haine/Hiruko’s true home. As a result of Ryuunosuke pushing his body too hard, Shinpei’s right leg is ruined, but Ryuu offers to control his body and taking on the pain.

This enables Shinpei to walk, which he needs to do to find Ushio, whom they know is both still alive and no more than 50 meters away due to the shotgun she printed still being whole. Shinpei and Ryuu come upon a ball—Haine’s handball. They follow it into a Hitogashima frozen in time from when Haine lived.

There they find Ushio, apparently in great pain and in contact with Haine. But this Haine is different: she’s just a kind little girl like the one Ryuunosuke’s sister befriended years ago. Assured there’s no threat, Ushio introduces Haine to Shinpei and Ryuunosuke.

Haine tells them they’re in the realm of the dead, Toyoko. While the power of the awakened Observer’s Eye can only be fully utilized in the real world, Shide has brought Ushio here to steal the eye from her. Once he has the eye, he will transcend to a still higher dimension…and destroy the world. 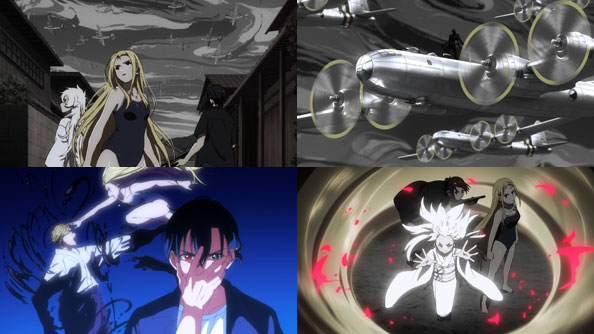 Right on cue, Shide uses Baby Hiruko to summon one of Haine’s memories of her island being firebombed by a squadron of B-29s in World War II. Ushio’s hair shield protects them while Haine prepares to use her innate power to suspend the memory, giving Ushio a shot at attacking Shide. Without Hiruko in his possession, his armor will disappear, and she can kill Shide’s inner body within.

As you can tell from the screenshots, this episode is a trip, packed with gloriously detailed, imaginative, gorgeous, and frightening imagery, and an even more heightened reality when it comes to action, with Ushio using falling bombs as steps up to the plane where Shide is.

But as cool as this sequence is, it still isn’t enough to stop Shide, because the body she attacks is a hollow one – nothing but an empty suit of mud armor being controlled remotely through Hiruko. Gaining this new piece of information may prove costly, as Ushio passes out and starts to fall.

If any of this is wrong, I apologize, but the plot mechanics and rules of Summertime Render become more and more baroque with each passing episode. But this is such an engrossing spectacle and I’ve come to love these kids so much, I don’t really mind the growing complexity. 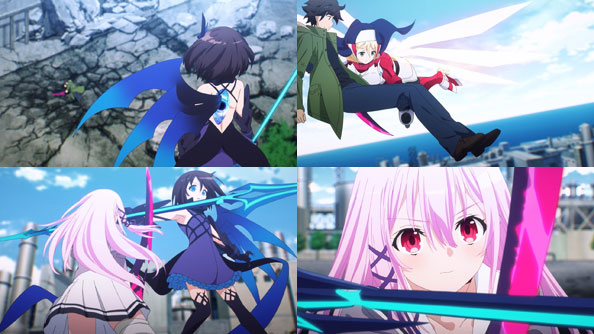 Shuu, Ayano and Sharon are fighting as a cohesive unit, but against Kanna the best they can do is maintain a stalemate. Enter Tabula Rasa Kisara, who despite having no memories decides on her own not to let what seem like nice people die in a battle with a not-so-nice person.

The addition of Kisara to the battle definitely gives Team Shuu an edge as Kanna starts to flounder a bit, but then she summons three powerful demons, which means all of the other demon hunting contractors spring into action, for the city that’s the only home they have, for honor and glory, and money too.

When even Kisara can’t quite get to Kanna’s heart to seal her, Shuu lends her power in the form of a kiss. Turns out their old contract terms work just fine, and the newly re-Hot Topic’d Kisara has a stiff second wind at her back. She keeps Kanna occupied enough for Shuu to fire his demonic bullet. Asmodeus flees from Kanna, and Kisara carves her into ribbons, sending her back to whence she came.

In the aftermath, while some demons made it to the city, there were no civilian casualties, so the contractors call it a victory. Sharon admits the Abbey will still be coming for Kisara, but at least today, Sharon won’t be the one to kill her. Wondering where a demon girl fits in a human world, Kisara gets a supportive hug from Ayano.

The Hachisukas continue their sibling rivalry for control of the city—and international coverup to maintain their autonomy. Sharon makes a joke to Ayano about spending the night with Shuu before boating off to face inquisition. Shuu visits his parents’ grave and promises his work isn’t done, but he’ll do it the right way this time. 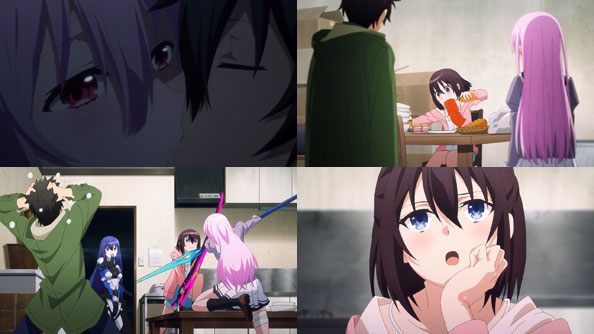 As for Kisara, she wants Shuu to teach her all the memories she lost, which apparently includes fulfilling the role of his girlfriend. Things are about to get hot and heavy in his apartment when the lights come on to reveal Kanna gobbling up all the food in the place. While the authorities kept her restrained in the bowels of city hall, this is only the latest of several escapes.

Those escapes result not in her unleashing demons on the city or causing any damage, but inserting herself back into Shuu’s home and life and voicing her disapproval of Kisara. Now Kisara has in Kanna what Ayano has in her: a younger rival for Shuu’s attention.

With Kisara, Ayano, and now Kanna all pointing weapons at him and asking whose side he’s on, Shuu’s in the messiest mess yet. And frankly, that’s the best way for this series to end: never taking itself too seriously and gleefully embracing the mess. 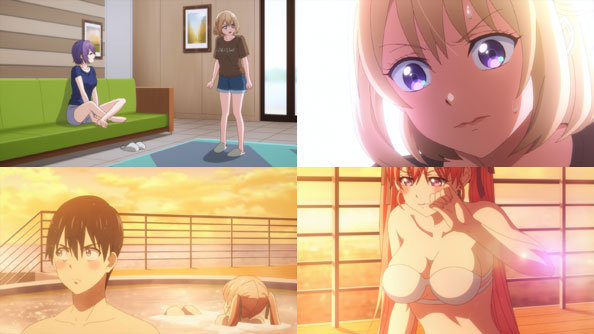 At the end of Nagi and Hiro’s balcony convo, the subject of Sachi comes up; specifically, that Sachi’s a little odd, and seems to be in love with Nagi. To Sachi this feels like a betrayal, but I get it; Hiro is sick of the status quo and wants to move things along. Sachi, with her constant wavering, is an obstacle to that, so it figures she’d confront her here.

Nagi, who as we know was raised under modest circumstances, is anything but when confronted with that outdoor “bath”, meeting the Pacific Ocean with nothing but his birthday suit. Things suddenly get tense when Erika shows up, and the show even implies she’s naked as well (by covering her top and bottom with Sobasshi stickers.

Turns out she was fine getting in with Nagi because she’s wearing a swimsuit, like you’re supposed to in an outdoor hot tub, and didn’t realize Nagi didn’t get the memo. Still, up until then, she’s very happy to be sharing moments like relaxing in the hot tub with friends.

It isn’t until that night that Erika remembers there are only two double beds in the house. It seems unlikely this problem wouldn’t have come up earlier, and the need to draw straws to see who has to share a bed with Nagi seem particularly strained contrivance considering the gigantic sofa in the living room, and Nagi being worried about a spider should he sleep on it.

Nagi and Sachi end up having to share a bed, which Sachi splits 60-40 in her favor and will brook no trespassing. Erika and Hiro thus share the other bed, but preface bedtime with a spirited game of Twister followed by a bubble bath. Hiro confides in Erika that she’s never even met her fiancé but has no interest in him…and if Erika truly isn’t interested in her fiancé, Hiro asks if she can “have” Nagi…before falling asleep on the spot.

As with calling out Sachi’s feelings, it’s the most overt Hiro has been to Erika about her desire to be with Nagi, and for the other girls to shit or get off the pot. Hiro still seems to be the #1 Girl for Nagi, but between his hot tub time with Erika and the fact he suddenly can’t sleep a wink in a bed with Sachi, things remain complicated.

That brings us to the morning, when a knackered Nagi finds Erika staring at the Twister and bubble bath. The four conduct a search of the house and find all the other things that connect her and Sousuke, as they used to visit together as a family. When a video game they played has save data from just three days ago, Nagi runs out of the house, hoping to find Sousuke in town…for some reason??? 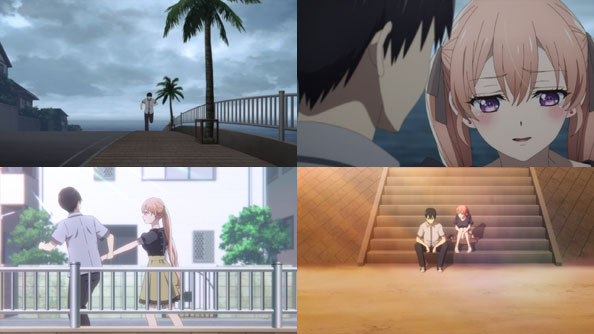 I mean, three days is a lot, right? If Sousuke wasn’t staying at the house from the day Erika & the others arrived, why would he still be hanging out in town? That would mean he got a hotel or something there, but why, when he could stay free at this fam’s house? Erika chases after Nagi, suddenly scared to reunite with Sousuke even though her Insta efforts were primarily targeted at him.

Nagi takes her hand and assures her there’s nothing to fear; he’ll be right there with her when they meet Sousuke. Alas, he’s nowhere to be seen, and no one in town has seen him either. At this point I’m still not 100% convinced he even exists, or is another weird game Erika’s dad is playing; hotel magnates are capable of anything, after all.

There’s also the odd fact that Nagi and Erika just flat-out ditched Hiro and Sachi for the whole day. That ain’t right! So now we have just two episodes to go, and so much left up in the air, including whether Sousuke even exists, and if so how he’d react to reunion with Erika. While admittedly drowsy when she did so, Hiro did ask Erika if she could have Nagi, and that was just…left hanging. The last two eps have some heavy lifting to do!