Shuu, Kisara, Ayano, Akino, and a suit whose name escapes me meet with Sharon at the safe house where she’s wining and dining herself to go over the present situation. Essentially, Asmodeus is a demon that has existed in the human world for a good long time in various forms, and Miles’ memories confirm the Hive Three Mine incident was Asmodeus’ doing, not Shuu’s dad.

The various Demon Hazards around the city form the same shaped magical circle that circled Europe, and the location of the final ritual is far offshore to the northwest. Official maps say it’s just open ocean, but it’s likely not.

While Kisara and Sharon go on a boat trip to find the island where they believe Hive Three Mine and Kanna (Asmodeus’ gate to this world) to be located, Ayano takes a ride with Hachisuka Linfa to ask her about the secret location. Mikhail sends another group to stop and arrest both Ayano and Akino, but Shuu ruins his plans by borrowing an attack helicopter.

Linfa, proving she’s still a friend to Ayano, gives her the coordinates to the mine site, now shifted since Bayron City itself was moved away from said site 12 years ago. They arrive just as Kisara and Sharon locate Kanna, whom Kisara has to keep Sharon from killing on the spot.

Mikhail then decides to try out an old “Star Wars”-style satellite weapon to destroy the entire site before Asmodeus can pass through the gate, but he’s a bit too late. The weapon is ineffective, and Asmodeus’ colossal hand emerges from the island, and the wound to its palm quickly closes.

Kisara managed to escape the initial explosion along with Sharon, and while they try to fight the hand of Asmodeus (from which hundreds of other arms and hands branch off) Asmodeus summons of all its previous forms, only in stone, including that of Shuu and Kanna’s mother.

Shuu arrives at the scene and asks Kisara to take all of his remaining memories, if that’s what’s needed to get rid of Asmodeus. Kisara bursts into tears and hesitates, fearing Shuu won’t be Shuu anymore if she obeys him. Then she’s impaled through the chest from behind…by Kanna, or at least the Kanna who is serving as Asmodeus’ gate.

Assuming Shuu remembers his sister’s face (and we’ve seen he’s in such a bad way he barely remembers Ayano’s name), this has to be a major mind trip for Shuu, who will now almost certainly have to give up way more than he should to heal and power up Kisara. If Asmodeus succeeds, Bayron City and perhaps the world may be doomed. But stopping Asmodeus may mean killing Kanna. Not an enviable choice. 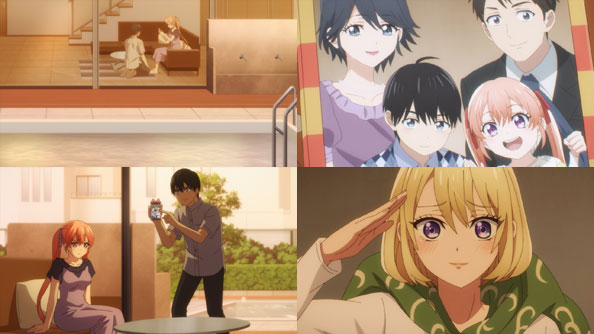 After sustained insistence from Nagi, Erika finally shows him the photo of the two of them when they were little kids. Only Erika claims the black-haired, blue-eyed boy isn’t Nagi, but his biological older brother, Amano Sosuke, with whom Erika grew up with before his mysterious disappearance.

Sosuke is the one Erika has been hoping to find via Insta, and now all of her interactions with Nagi since they met on that bridge are placed in the context of Nagi reminding her of her long-lost Onii-chan. Nagi takes this news relatively well as Sachi returns to the house after recovering from her fever.

While he has no reason to doubt Erika, the photo and her explanation alone are sufficient for Nagi to paint a complete picture of just what the heck happened with the Amano and Umino families, so he decides to meet with his biological father, Mr. Amano, for further insights.

As Erika explains the situation for Sachi, who now knows why Erika went out of her way to be a good big sister (because she too was a little sister), Erika’s dad doesn’t offer a whole lot to Nagi, insisting that he has not brother while confirming the authenticity of the photo. 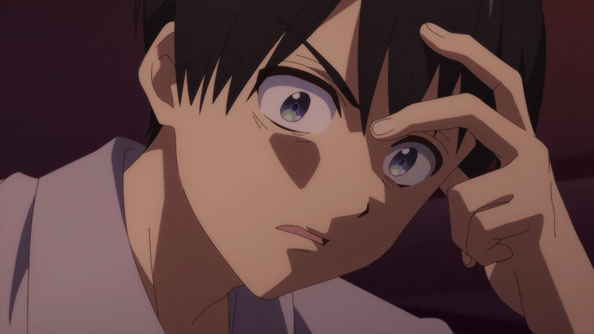 Those two positions either mean Erika’s dad is confirming it really is Nagi in that photo, or for whatever reason is invested in maintaining his position that Sosuke never existed. Did he die early? Was he disowned? Dad’s cavalier wishy-washiness makes me question whether there was a Sosuke even though Erika insists there was one. I also can’t rule out Nagi losing his memories of growing up with Erika due to some kind of accident.

That said, one thing Mr. Amano is clear on is that he wants Nagi to marry someone. At first he believed that should be Erika, but he sees no reason why it couldn’t be Sachi (if, as I suspect, he doesn’t really care how the two people raised as blood siblings would feel about it). But I believe that’s the first time Mr. Amano has offered Nagi a choice of whom to marry, perhaps to better the odds of getting what he and the Uminos want: a united family.

Obviously the odd girl out here is Hiro, who remains Best Girl and the most logical choice for Nagi to date/eventually marry as she has no connection to either family. The episode slips her in to explain the scenario with dolls to confused kids, but she’s never felt more outside looking in than now, when it seems like fate is asking Nagi to choose one of the other girls. As for whether Sosuke actually exists, if he’s alive, and if so if we’ll ever see him … there’s five more episodes to sort that out.

When Chisato catches Mizuki and Kurumi researching some kind of solution for her artificial heart problem, she can tell they’re not looking forward to their own paths. She urges Mizuki to go to that ripped hunk she met online, and Kurumi to move to Germany, which she believes to have the strongest board game game.

Takina is back at DA as one of the worker bees, but is still Takina and still has only one goal in mind while she’s there: find Yoshimatsu and a means to repair Chisato’s heart. Of course, Yoshimatsu is now a captive of Majima, who feels bad for the raw deal Chisato got.

Majima may be focused on getting rid of the DA, but Alan is next. and while Yoshimatsu is fine with Majima raising hell since he’s living up to his full potential as Alan planned, he’s not about to reveal any information about the Institute, even if it helps Majima progress further into the perfect villain he was apparently always meant to be.

The last we see of Mizuki and Kurumi, they give Chisato an understated goodbye, then sit in their airport-bound taxi. I don’t believe for a second they’re going to hop on any planes, particularly if either of them catch wind of the news-making events that follow in the episode.

Takina uses both her rebellious streak nurtured by Chisato and her former firing “for killing too many people” to visit and question one of the captured arms dealers, who lets her know that “Alan” wanted the guns to begin with. Could this be a super-long game being played by Alan, with Majima as their ideal puppet, despite thinking he’s simply doing what he wants?

Kusunoki makes a rare appearance in the field with her Lycoris when they raid Majima’s hideout, but he’s already gone, and verbally and philosophically spars with Kusunoki about how true peace cannot be thrust upon a society by a Machiavellian leader, but earned by its citizens.

On the day of the Enkuboku Tower completion ceremony, we learn when Robota helps him hijack the tower’s first broadcast that he intends to prove that theory with a game of sorts. The thousand guns he acquired have been distributed throughout the city, and once they’re all found by those who have no idea what to do with them, blood will flow and force a pampered society into entering the crucible of chaos needed to achieve true peace, free of shadow organizations like the DA or Alan.

Throughout all this, Chisato and Mika have simply been hanging out at the closed café, where Mika presents her with her coming-of-age gift: a gorgeous yukata, as well as some coming-of-age truth: Yoshimatsu only agreeed to save her life if Mika promised to make her into the ultimate hitman. He never told her the truth because her love and idolization of her “Mr. Savior” was what helped fuel her rise into the finest Lycoris, as well as one of the finer people Mika’s ever known.

Chisato takes the news well, and assures Mika that no matter who Mr. Yoshi truly is or always has been, her love and respect and gratitude for her two dads will never fade, and nothing she learns will ever change that. But she does want to meet Yoshi one last time and hear the truth from his mouth. For this reason, just as Takina is back with the DA for Chisato’s sake, Chisato accepts Kusunoki’s call to deploy, puts on her red battle uniform, and heads out for perhaps her final mission as a Lycoris.

Kusunoki called Chisato under pressure from her boss that she was losing control of the situation and risking the exposure of the Lycoris to the public. Majima’s broadcast may have been cut off, but not before damage potentially fatal to the DA’s secrecy is done. Chisato is believed to be the only Lycoris who can stop Majima, but I suspect her strict orders to kill him will not be obeyed to the letter.

Going forward? After last week’s final date that felt like closure, it’s still very much uncertain if Chisato’s heart will be fixed (or if she’ll get a new one) and survive to the end of the show. It’s also uncertain that Mizuki and Kurumi are off the board for the remainder, while it’s a good bet Chisato and Takina will fight side-by-side on the battlefield before all’s said and done.

Hell, there may even be a reversal where Chisato survives and Takina is the one to lose her life in the ensuing final battle with Majima. Or maybe the DA and/or Alan will be exposed and stay exposed, which may be ultimately for the best for the long-term health of Japan’s society. With this tower showdown comes a tower packed with possibilities. While ever weary of who might be lost on the way, I look forward to watching how it all shakes out.