Kazuya probably feels like Ruka’s kiss, complete with tongue and the requisite saliva strings, lasted the entire week between the last episode and this one. But Ruka felt threatened by Chizuru and didn’t want to lose, so she marked her man. She also hastens to notify Kazuya that it was her first kiss, and despite the saying that the first taste like strawberries or lemons, hers just tasted like booze.

A frankly obscene amount of Kazuya inner dialogue ensues as he tries to deal with having been wall-slammed and made out with by Ruka only to have to return to the table with his mom, grandma, and Chizuru, who can all tell something’s off about both of them. Gran then produces her gift to Chizuru: her heirloom engagement ring. Chizuru says she couldn’t possibly accept it, as one does, but Gran and Kazuya’s mom insist. 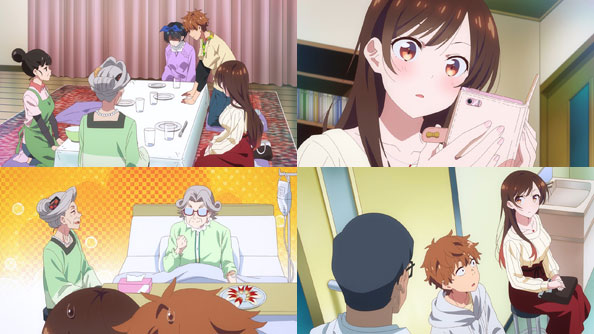 Having seen how backed in a corner and desperate Ruka is and seeing Chizuru struggle, Kazuya decides he’s going to come clean, right then and there, or at least say what needs to be said to shatter the charade. Both Ruka and Chizuru can tell he’s about to say something to the effect of “Chizuru and I broke up”, but before he can get the works out, Chizuru gets a call…from the hospital.

Her gran is unconscious, so she, Kazuya, and Kazuya’s gran take a taxi to the hospital, where they find Chizuru’s gran not unconscious, and her usual tough, cheerful self. The grans have fun talking about their young grandkids, and when the doctor asks Chizuru to come with him to talk, she leaves them in Kazuya’s care in a very relationship-y way. 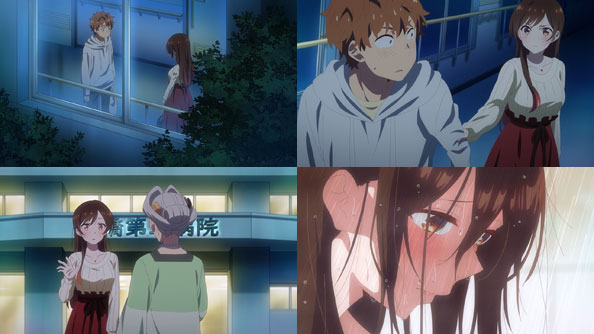 After torturing Kazuya a bit, the grans send him to a konbini for snacks, and he meets Chizuru in the dark corridor, where she tells him that things aren’t great, and despite her smiles and laughs she doesn’t have much time left. Kazuya asks if she’s okay, and she puts on a brave front. When he heads to the hospital room to finish coming clean and making things right, Chizuru grabs his sleeve and tells him not to.

She knows her gran is worried about her being along when she’s gone, so telling her she and Kazuya broke up on her deathbed simply isn’t something she’s willing to do.  I don’t think she’s using this as a pretense to remain in…whatever it is she and Kazuya have.

But when she says that whatever is now “more than a lie”, it feels like she’s saying that more for just her gran’s sake. She and Kazuya head home and go their separate ways, and Kazuya curses himself for not being able to do more for her, while also finding himself in a spot where revealing the truth will cause more harm than good.

That said, the lie is still doing harm to Ruka, but when she and Kazuya go on a grammable pancake date, she shows genuine empathy when she asks about Chizuru and her gran. She also decides to call a truce, as with Chizuru’s family situation it’s just not an appropriate time to continue her “offensive”.

That said, she’s now convinced that now that they’ve had their first kiss, they can now kiss whenever. Kazuya’s not so sure about that. He’s also even more flummoxed that not only Chizuru but also Ruka have decided that the status quo should be maintained until further notice. And that’s even before he’s aware of whatever it is best girl Sumi is planning to celebrate his birthday…

Cassandra has another horrible premonition of doom: all the members of their party dead, Bell struggling, and Ryuu Lion looming like an angel of death. She awakes (partially nude, which is neither here nor there) to Daphne announcing that an adventurer has been murdered.

A witness of uncertain trustworthiness claims the Gale Wind Ryuu Lion did the deed. That’s enough for Bors to arrange a posse to hunt her down and bring her to justice.

Before Bell can say too much about his past dealings with Ryuu, Aisha escorts him somewhere where they and the rest of his party can talk in private. They agree to join the party with the purpose of getting to Ryuu first and getting to the bottom of things before needless blood is spilled.

Cassandra, having seen what happens when the party goes back down into the lower floors, doesn’t like this course of action one bit, but her method of trying to dissuade the rest of the party—simply telling them to stay behind—doesn’t fly. Even if he believes Cassandra, Bell trusts Ryuu and wants to help her. When Cassandra collapses from frustration, Daphne offers to stay behind with her.

Cassie says she’s coming with them after all, and resolves to find a way to save everyone on the way. Lili gets a letter to Hestia explaining the situation, and we learn from Miach that Cassandra indeed has an extraordinary gift of foresight. The hunting party is large and unwieldy, but when a herd of mammoths attacks, they’re dealt with rather swiftly.

As the party heads deeper into the Dungeon, Cassandra takes Welf aside and asks him a favor. We catch a glimpse of Ryuu running at full speed in the vicinity of the Great Falls with hate in her eyes. Then everyone starts feeling tremors that seem to be coming from the 27th floor, where Cassandra’s awful premonition took place.

Clearly recalling Aisha dying in that dream, she manages to keep her from joining the other adventurers down there, though Cassandra’s manner of convincing her involves exaggerating the difficulty inherent in carrying Haruhime. Instead, Bell goes down below, which is acceptable to Cassandra as he didn’t die in her dream.

That said, he did look very much the worse for wear, and all the talk of Ryuu being a superior Level 4 means he likely won’t have an easy go of it down there. Seeing things that even the gods don’t know will happen is clearly a terrible burden for Cassandra, not least because most people don’t want to believe their fates are predetermined.

Here’s hoping whatever she saw is only one possible dream, and that the steps she’s taken will help ensure a better outcome. Of course, a lot will depend on what Ryuu’s whole deal is.