In one of Takafumi’s memories from grade school, he’s bullied by some boys for reading an innocent fantasy LN, only to be bailed out by Fujimiya, who may still looks like a demon to lil’ Takafumi’s eyes, but he’s genuinely moved by her support. Present-day Fujimiya remains mortified that this is how Takafumi viewed her, especially as she became more girly in middle school.

But that was then and this is now, and Fujimiya has high hopes for her newly-rekindled relationship with Takafumi. When she learns he got cash from Ojisan for his birthday which he spent on a coffee grinder and some fancy beans, she decides to send him a “gift” of her own.

This comes in the form of a photo of her in a swimsuit from middle school, which while cute, even she realizes in hindsight might’ve been a questionable choice. But hey, watching your crush’s childhood memories in which you’re a loathsome devil spawn does weird things to the mind!

That said, Takafumi couldn’t be more tactless when his first instinct is to ask Siri how to delete the photo from SM, and then he gets an alert about a sale on coffee beans and once again leaves Fujimiya with his uncle. When he almost spills his coffee, he casts an ice spell that freezes her, then melts her with flame.

The result of all this is that Fujimiya is soaked and needs to take a shower to warm up. Ojisan leaves the apartment to give her her privacy, but Takafumi enters when she’s wearing one of his shirts and nothing else. Again, after watching a younger Takafumi portray her as a monster, seeing him react to seeing her inspires her to uses this “pinch” as a “chance”, in Ojisan’s words.

Unfortunately, Takafumi proves as dense about Fujimiya’s feelings and intentions as Ojisan is about Elf. He considers it shameful that he should feel this way about looking at a “good friend”, and when Ojisan arrives on full battle alert (due to Takafumi using the wrong flag signal) Takafumi asks him to delete his memories of seeing Fujimiya. Of course, Fujimiya stops the spell, and warns Takafumi she’ll dress like this again if he wipes his memory.

When Fujimiya turns twenty, she and Takafumi and Ojisan have a modest but warm celebration drinking their preferred choice of canned alcoholic beverages and watching more of Ojisan’s misromantic adventures with Elf. Elf is astonished he was able to restore the city barrier, and also recalls when Ojisan (or “Orc Face” as she calls him) saved her from a venom dragon. 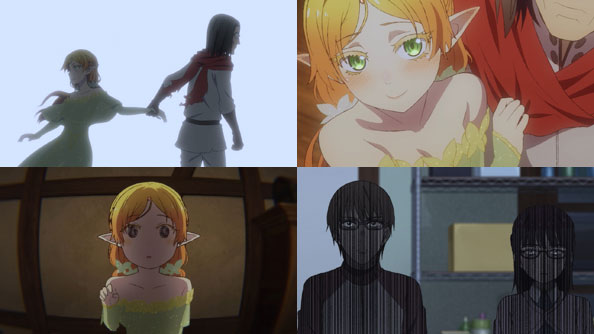 After a bit more of their usual repartee, Uncle suddenly takes her by the hand and draws her to his side as they walk through the town market. Elf is shocked by this sudden bout of lovey-dovey behavior, but she can’t hide her enjoyment of it either. When it looks like he’s ready to take her up to his room, it isn’t until he gets his door open that it’s revealed he only needed someone to lean on.

He slams the door in her face, locks said door, and falls immediately asleep. The next morning Elf shows signs she cried herself to sleep. In short, Ojisan’s an unintentional villain, and Fujimiya must do everything in her power to keep Takafumi from turning out the same way.

In the present, Ojisan demonstrates how he can in no way hold his liquor, and then offers to take Fujimiya home via flight. Ojisan, Fujimiya, and Takafumi end up flying through the air upside down, with Ojisan merging the fantasy of the game he was playing with reality, and his nephew and his friend are simply along for the ride.

The end credits are cut short by an extra segment in which Ojisan once again gives Elf the wrong idea by sucking out poison that turns out to have aphrodisiac effects on Elf. When his doting closeness gets to be too much for her, she merely socks him in the face with a swift kick. Fujimiya asks Ojisan if he still has some of that poison so she might be able to use it on Takafumi…because a pinch is a chance! 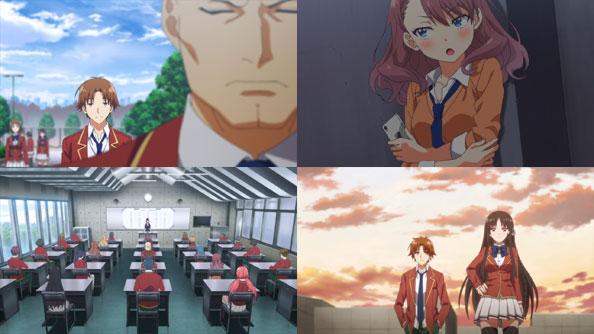 There’s a changing of the guard at the top of the school pyramid, as Manabu resigns to make way for Nagumo Miyabi of Class 2-A, who intends to turn the school into a true meritocracy.

Meanwhile, Kiyotaka is suddenly Mr. Popular, earning praise (and a warning about Ryuuen) from 1-A’s Katsuragi to being asked out by Satou Maya, who was smitten with his athletic performance. Kiyotaka agrees to an exchange of numbers and a platonic start.

Of course, hot on the heels of the sports fest is the next special test, which is called “Paper Shuffle” and involves everyone being paired off and taking tests with questions prepared from the other classes.

As is typical of CoE the rules are stubbornly labyrinthine, but the Kiyotaka and Suzune agree that the most important aspect of the test is how people will be paired off, which will be chosen by how everyone scores on a mini-test.

Suzune, Kiyotaka, Ken, Kei, and Yousuke meet to talk strategy, and are joined by Kikyou, whose presence Suzune doesn’t protest. Hanging back with Kiyotaka, Suzune tells him that she went to the same middle school as Kikyou, and there were rumors she was singlehandedly responsible for the utter destruction of an entire class.

While Kiyotaka suggests she try to get Kikyou expelled, Suzune still believes there’s a way to make Kikyou their ally. She also makes a point to earnestly thank Kiyotaka, since she knows he was the one who saved her from Ryuuen.

With true villains like Ryuuen stalking about, that’s not an unrealistic hope. He wastes no time outing the Class C traitor, who turns out to be Manabe, a nice connection to a previous special test and the person who more or less brought him and Kei together. Manabe tells Ryuuen that the Class D “mastermind” is either Kiyotaka or Yukimura, the only witnesses to her bullying Kei.

At the cafe, Suzune leads the group in the strategy meeting, proposing that their class be split into four groups based on their academic performance, and for the lower two quarters of the class intentionally get zeros and ones on their mini-tests, so that they’ll be paired with the strongest scores and thus result in a balanced group and minimizing the possibility of any expulsions.

It’s a nifty little plan, and not only does Kiyotaka not involve himself in the meeting, but leaves it all up to Suzune to convince the class, which she does admirably due to her growth in the sports festival softening her edges.

That night, Kei calls Kiyotaka, worried about how things went with him and Satou Maya. He posits that she’s worried he may shirk his responsibility to protect her if he gets close to Maya, but he tells her that they only agreed to exchange numbers for now, and even if it amounted to more, he promises he’ll have her back come what may.

Even though I feel bad for Kei being caught up in Kiyotaka’s web of awfulness, and like Maya I’d strongly suggests not harboring a crush on him, I’m also just glad that she feels happy and safe, and equally certain Kiyotaka is a man of his word when it comes to protecting her. He doesn’t even add “so long as you keep doing as I say”.

Unfortunately for Kei, Kiyotaka ends up being paired up with Maya for the Paper Shuffle, while Suzune ends up with Ken (no surprise there). Everything’s going according to plan so far, but the threat of Ryuuen looms, as does Kikyou’s assertion that expelling Suzune and Kiyotaka is a higher priority than rising to Class A. I certainly hope Suzune makes strides in her peace talks.