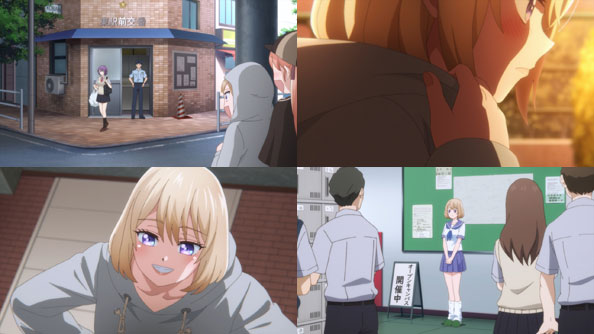 Sachi wants to know more about this Segawa Hiro girl her dear brother loves so much he’s willing to date her even while engaged to Erika. Rather than talk to Hiro, she ropes Erika into a day of stalking. Once it’s determined that Hiro is a perfect superhuman (who even delivers a 100-yen-coin she found on the street to a police box) she confronts Nagi about it, telling him he’s too good for her.

I’m not sure how Sachi’s inner logic works, but by saying this to Nagi she’s implying that she’s not too good for him. At the same time, she decides she’s going to attend the same high school as Nagi, Erika, and Hiro, presumably to become closer to her brother’s ideal of Hiro. Naturally when she shows up in her sailor uniform she creates as big a stir as Erika’s arrival.

While Hiro gives Sachi a tour of the school, Nagi and Erika follow and try to listen in. When the our ends and Sachi’s first question is about how Hiro feels about Nagi, he can sense something’s up and runs to confront them both. Only neither of them have anything to say, because apparently they’ve become friends with a shared like of…him.

Nagi, Erika, Sachi and Hiro then have lunch together, making Nagi’s friends going all meta by drawing up the diagram of relationships in their imaginations that’s pretty much spot on with that of the show, including their conclusion that Nagi isn’t exactly living an easy carefree life. 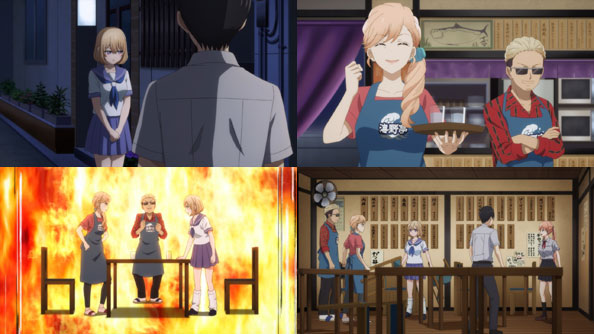 It’s one thing to want to go to Nagi’s expensive college prep school, but quite another for their family of modest means to afford for both her and Nagi to attend. Nagi and Erika accompany her to the Umino diner as moral support, but their parents are surprisingly fine with it. They’ll be able to afford for Sachi to go to Nagi’s school…if they sell the diner.

Sachi protests along with Nagi; this parent martyrdom won’t stand. Sachi and her mom then get fired up, and the men of the family back off. It ends up being the third woman in the family, Erika, who is able to quench the flames and suggest a third way: Sachi will work hard to get accepted to Nagi’s school, while the folks’ll come up with a way to pay without selling the diner.

Saying they’ll just “figure it out” seems like a cheat, especially when it’s suggested from Erika, whose monthly cosplay wardrobe probably exceeds what the entire Umino clan spends in a month. But that’s not the biggest problem with the episode, which is its central figure: Sachi.

Sachi is two basic things: a brother complex in human form, and a serial copycat. She follows through whatever she sets out to do, but has no hopes or dreams of her own. She only wants to do what her brother has done, following but never leading. It was like that when he won at swimming, reading, and running, and now she’s doing it with school.

Sachi is cute, but she’s a painfully dull and shallow character, her hot-and-cold attitude towards her brother is rote and tiresome, and there’s zero change she wins the Nagi sweepstakes. That makes any episode that focuses on her to this extent feel like a slog.