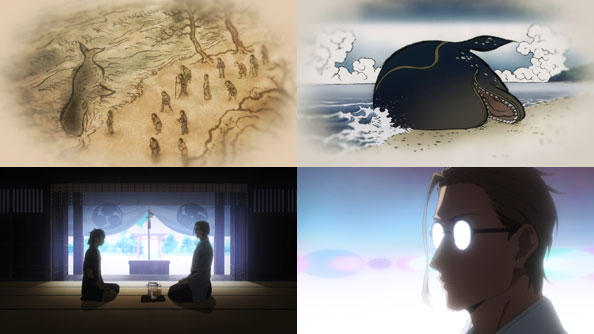 Hizuru tells the story of a famine in 1732 that threatened to wipe out Hitogashima’s population, until a whale washed ashore. The whale was a shadow, and it copied the first human to come close to it: a little girl named Haine. Back in the present, Karikiri offers Shinpei some cold barley tea and conversation. While initially presented as a friendly or at worst neutral party, there’s a tension and building dread to the ensuing one-on-one chat. 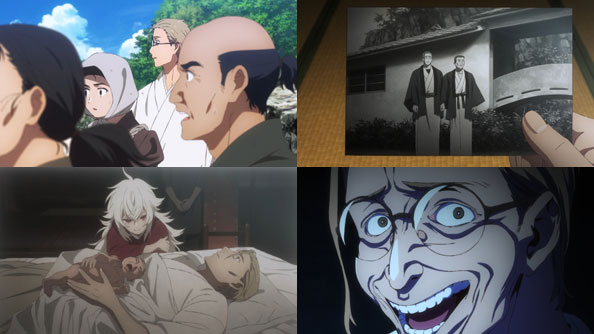 The thing is, Shinpei already knows that Karakiri is really Hishigata Shidehiko, AKA Shide. He’s not a Shadow, but he’s not quite human either. In previous loops, Hizuru and Dr. Hishigata’s information paints the picture of how Haine birthed a child with Shidehiko, and the resulting child grew into a perfect clone of Shidehiko.

He then had Haine transfer all his collected memories into the clone, thus making him indistinguishable from himself and enabling him to live for over 300 years. Considering how crafty he must have grown in those years, it’s pretty impressive Shinpei and his pathetic band were able to get this far. 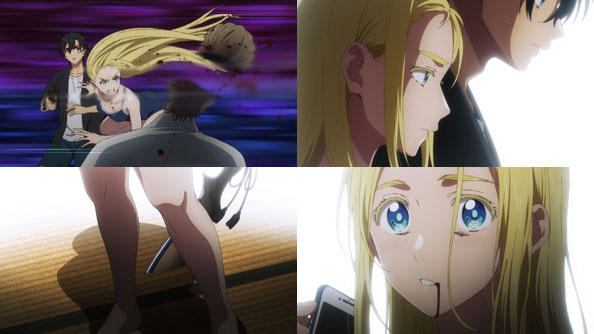 While in the loop flashbacks we see that Shinpei’s group gathered all the information they can and prepared the best they could for a confrontation, with Shinpei insisting that he wanted to know why Shide killed his parents before deciding whether to kill him. After all, if he’s human he can’t be reasoned with, right?

Wrong. Shin made a critical error in confronting Shide in human form, and especially in letting Ushio accompany him. Sure, he’d have easily fallen into Shide’s clutches without her protection, but when she’s had enough of Shide’s blathering and slices half his head off, Shide gets exactly what he needs, all because Ushio insists on doing the dirty work so Shin’s hands remain clean. 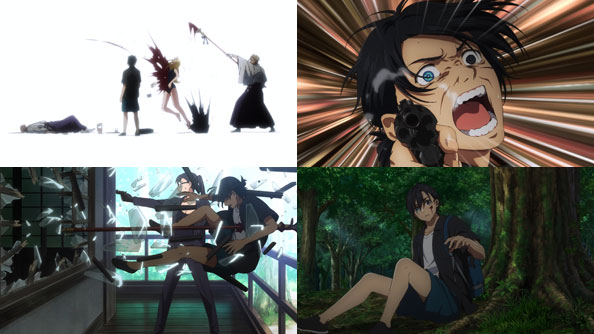 When Ushio is on the phone, a copy of Ushio casually plunges a spear into her shadow, and then slices upward, killing her. Shinpei empties his gun, but Shide puts up his Shadow Armor and catches the bullets, then throws the spear at Shinpei, impaling him and sending him flying out of the temple and into a tree.

Shin loops back to when he and Ushio saved the kids from the Shadow that took the form of their old teacher, only this time Ushio isn’t there. She’s gone, presumably for good. That’s a punch to the gut, but as Ushio said, she was happy for the “bonus time” after her human self was killed by Haine, and she and Shinpei got to reunite and kick some ass together.

The episode closes with Shin crying blood, wallowing in despair. But even if Ushio isn’t coming back in any form, the fact remains she’d want him and the others to finish the job and save the village. They can’t turn Shide, but they still have a Shadow Mio, two Shadow Babies, and guile. It’s not Game Over quite yet. 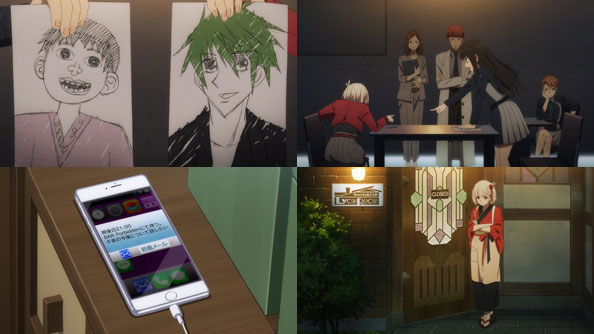 We start things off with some levity, as both Chisato and Takina prove as horrendous at drawing as they are spectacular at gun-fu in trying to draw Majima for the DA. Chisato is closer with the green hair, but I’m not sure what the heck Takina was looking at.

Later at the café while on a bathroom break, Chisato catches the slightest glance at a message on Mika’s phone. It’s for a meeting the day after tomorrow at 9:00 PM at a “Bar Forbidden” about her “future”. Chisato comes to suspect this means the future of LycoReco is in question. 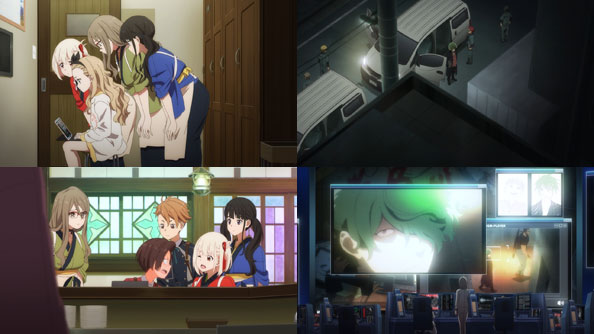 Chisato shares this suspicion with Takina, Mizuki, and Kurumi, and the latter quickly locates the members-only Bar Forbidden and forges entry for Chisato and Takina so they can get to the bottom of whatever’s going on. But in the meantime, Majima and Robota are planning another strike.

This time they assault a police station, with Robota providing cover for Majima’s team by creating dummy bomb threats that diver the Lycoris and spread them thin. While tomorrow’s news reports it was a yakuza attack, Fuki and Sakura arrive at the café with fresh footage. Chisato and Takina are able to positively ID Majima, while it’s confirmed Fuki has a mondo crush on Mika (and thus barking up the wrong tree). 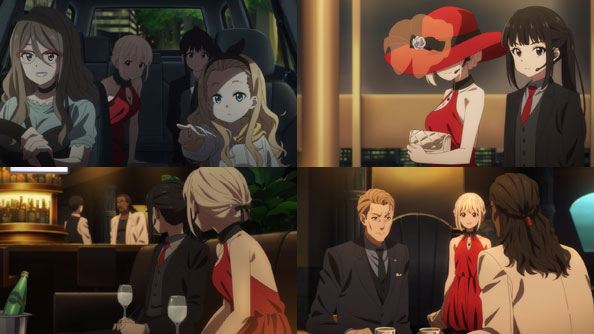 The night of Mika’s secret meeting arrives, and Chisato and Takina finally have an opportunity to dress to the nines for their little spy mission. Chisato wears a glamorous backless red dress and ostentatious hat while Takina goes for a smart black three-piece suit. It’s clear and present ship-bait, and I’m A-OK with it.

When they spot Mika, and then see Mr. Yoshi meet him there, both Chisato and Mizuki arrive at the conclusion Mika is actually on a date, which neither Takina or Kurumi get because they didn’t know Mika swung that way. The girls start to head out, but then Chisato overhears the lads talking about her surgery, and can’t help but confront them. 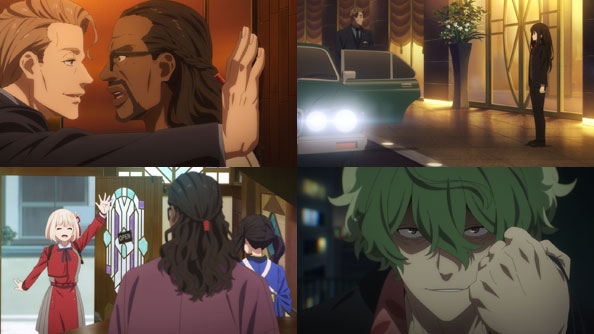 Takina gives Chisato all the time she needs, but neither Mika nor Yoshi have anything of note to say to her. Yoshi is clearly upset that Mika allowed Chisato to tail him to what was to be a secret meeting. While nothing is explicitly stated, it’s clear from what Yoshi does say to both Mika at the bar and Takina outside: he intends greater things for Chisato.

For him, that means using her talent for killing to its full effect, which I’d guess he believes to be underutilized at LycoReco. But even if he was responsible for the heart surgery that saved Chisato’s life, she didn’t ask for that, and so even if she’s grateful to him, the life she was given should be hers to do with what she pleases. And we know that means helping people, not killing them.

The other question is whether Majima, an apparent fellow Alan Child, has perverted his Alan mission, or if he’s doing exactly what he’s meant to do. Whatever the case, this Tokyo’s version of the Sky Tree is at risk, and Chisato and Majima are on a sure collision course. 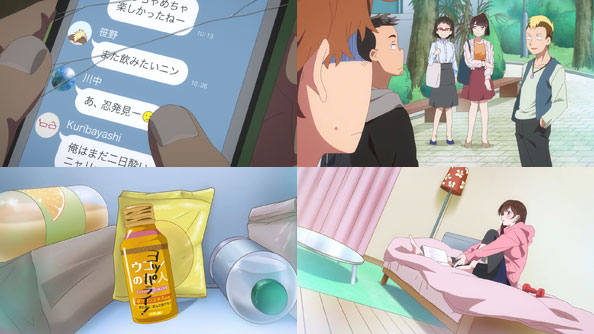 Kazuya wakes up with the mother of all hangovers, but also an odd fuzzy memory of Chizuru having taken care of him last night. He’s not sure if it’s just a fantasy, but what is real is that he was invited to a chat group that includes Chizuru’s private contact (not the Rental GF one he has and cannot use when not renting her).

He stops himself from adding her as a friend as it would send her a notification, but fantasy and reality once again collide in his booze-addled brain when he finds an energy drink in his fridge with a hand-written note from Chizuru (reading “Drunkard!”) that proves she was indeed there. We also cut to Chizuru also contemplating hitting the “add a friend” button for Kazuya. 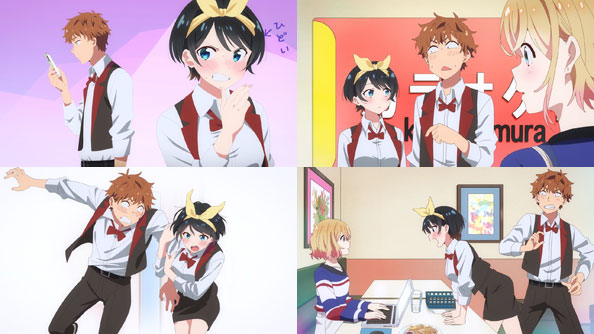 To me, all this means that Kazuya and Chizuru want to and probably should start acting like the neighbors and good friends they so clearly are, only their personal hangups and the fact Kazuya is always renting her services keep things cloudy and complicated. This week also reminds us that Ruka is technically his actual girlfriend, and at work she checks in with him on whether he’s ready to make them “official.”

Kazuya is saved by a customer arriving at the otherwise-deserted parlor, but that customer turns out to be Mami, who heard from Kibe that he was working here and decided to stop by and mess with him (she says she’s kidding, but she isn’t). Her plans are utterly stymied by the presence of Ruka.

After Kazuya tries to sidestep Mami’s and Ruka’s curiosity towards one another, Mami is simply too friendly to Kazuya for Ruka to remain silent and professional. She grabs Kazuya and makes it clear that they’re dating, then embellishes things by claiming they’ve gone all the way, and basically condemns Mami as his ex for coming by his work at all. 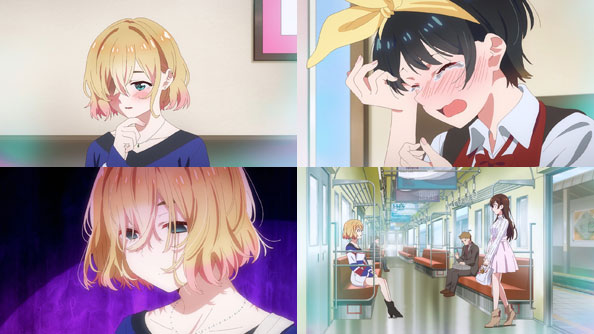 Mami has her knowledge of Chizuru as a rental girlfriend loaded, and decides to use it, but it misfires, as Ruka is not only aware but seemingly okay with it? Mami retreats for now, if not defeated, utterly bewildered by what the heck is going on with her ex. Ruka ends up in tears over the ordeal, and Kazuya can only sit and wait for her to cry it out.

Note, Kazuya is not to be sympathized with here—all of this is his doing, and if he were honest to Ruka about not having feelings for her, they wouldn’t be in this unsustainable “half-relationship” that is so easily threatened by a passing ex. If anything, I sympathize with Mami, who on one occasion asks herself why she’s wasting her time even thinking about Kazuya and his palace of lies.

The answer the show implies is that as much as she doesn’t want to admit it, she’s not over the guy. I prefer the interpretation that she’s infected by the same brain worms as Chizuru and Ruka, which beyond all logic and reason render Kazuya a halfway tolerable presence. (Sumi, the best girl, is either immune or not infected due to how rarely she and Kazuya interact.)

Speaking of Chizuru, she returns at the end of the episode boarding the same train as Mami, and a deeply awkward train ride ensues, with Mami being not subtle at all about the concept of obtaining items while they’re as new as possible lest they fall out of fashion. On the surface, she’s talking about Chizuru’s bag, which Mami identifies as having been in Kazuya’s apartment that one night. 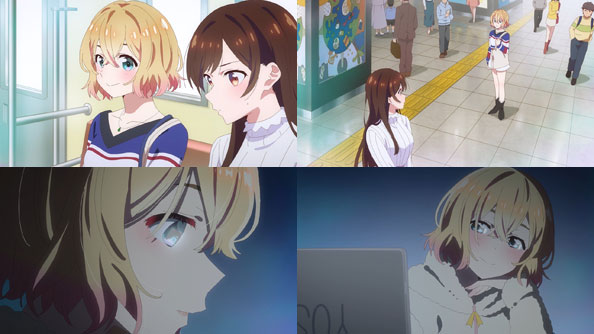 Because Mami cannot for whatever reason stop thinking about Kazuya, the gears in her brain continue to churn late into the night, as she attempts, like a private eye, to piece together Kazuya’s intricate galaxy of stupidity. While Ruka’s account is locked, Mami finds Kazuya’s grandma, and decides to follow her in hopes of gathering more intel.

From Yuuki Aoi’s half-bored, half-threatening, alway mocking sing-song lilt to the design of her disheveled hair and dead eyes, Mami is always portrayed as a potential chaos-spreading force, and the show seems more often than not to side with Kazuya and the others over her, as if she were reaping what she sowed by dumping Kazuya before fully realizing how she felt about him.

But I don’t see Mami as a villain. What Kazuya is doing is far more villainous. Mami may be looking to score points or exact some kind of vengeance, but she’s also trying to get at the truth of matters, and the truth is Kazuya’s relationships with Chizuru and Ruka are fundamentally flawed and require serious work.

Kazuya should have dumped Ruka, confessed to Chizuru and been rejected, get over it, then asked out Sumi, with whom he is the best version of himself, long ago. The excuse of not wanting to disappoint his grandma has long since ceased holding water. If he insists on maintaining the status quo, stringing Ruka along while he and Chizuru push and pull towards and away from one another, I welcome Mami’s efforts to break that status quo.