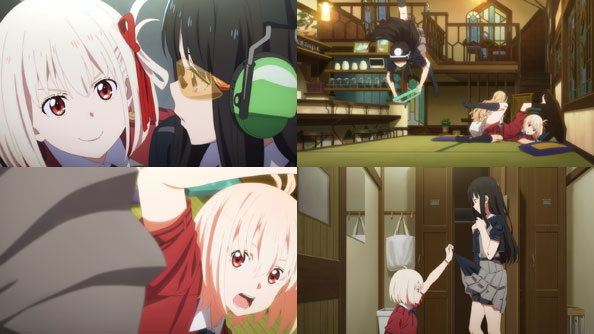 After having Takina practice shooting non-lethal rounds in the café’s  basement range (what a concept) Chisato, frustrated by being beaten in a VR battle game by a player called “Fuki” (who is actually Fuki), plops the headgear on Takina and lets her rip.

Takina defeates Fuki, but while doing a flip dodging virtual fire, Chisato discovers that Takina always wears tactical boxer shorts under her skirt, the result of Mika messing with her when it comes to “regulation clothing”. With no mission this week, this calls for a shopping trip. 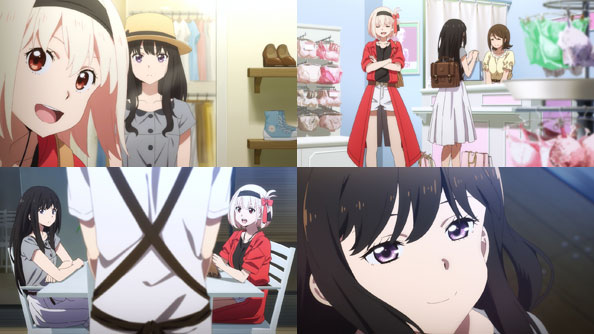 While underwear shopping sounds like a thin premise for an episode, what this really is is an opportunity for Chisato and Takina’s galmance to continue blossoming as they hang out in less lethal or official circumstances. Takina treats the trip like another mission, even bringing her gun, but Chisato makes her promise not to take it out.

They’re not Lycoris today, just two friends hanging out, buying cute clothes, and eating beautiful delicious fancy junk food. While Chisato is helping out some tourists with the menu with her perfect French, Takina looks up at the blue sky, the wind blows her hair about, and she seems to get what Chisato was on about, and she smiles. 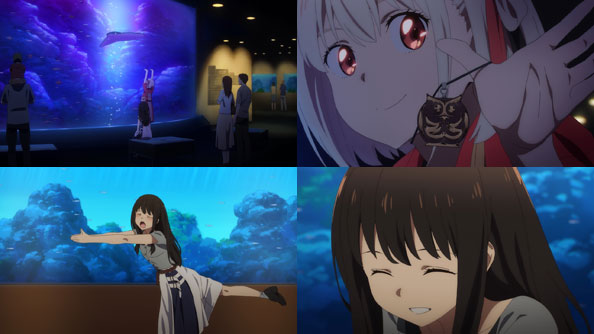 Their next trip on their girldate is to the aquarium, where Chisato naturally has an annual pass and mimics the movements of the various marine life. Takina also gets Chisato to open up a bit more about why she left the DA, where she probably could have gotten away with her non-lethal methods.

That’s when Chisato reveals her owl pendant signifying (whether she knows it or not) that she’s an “Alan Child”, part of the Alan Institute that either finds or produces “geniuses” such as her in all forms. Chisato says she left DA to find “someone” who also bears the pendant, who Mika knows to be Shinji, the older blonde dude always stopping by the café.

Seeing Chisato looking wistful and even a little down compels Takina to embrace her silly side, running over to the tank and mimicking a fish, inviting Chisato (and little kids watching) to join in. This cheers Chisato right up, because she knows Takina smiling and acting silly, like geniuses, are truly gifts from God. 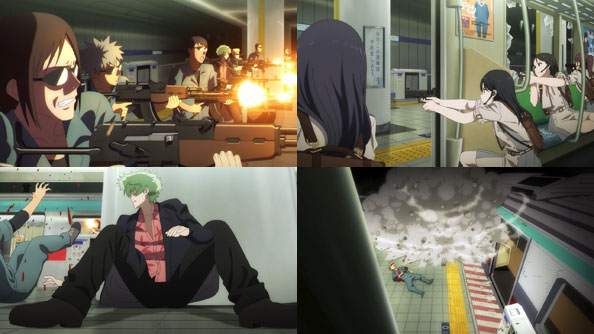 It’s a good thing the girls aren’t Lycoris this week, because I doubt even Chisato could have dodged what happens at the Kita-Oshiage metro station. A green-haired ne’er do-well and his band of terrorists disguised as workmen whip out all manner of heavy weaponry and open fire at the next approaching train.

When they stop firing, they realize the train is empty, but for a large task force of Lycoris, who return fire and kill everyone. Green-hair is only wounded, and detonates a series of bombs he set, blasting the station, train, and Lycoris aboard it to smithereens. 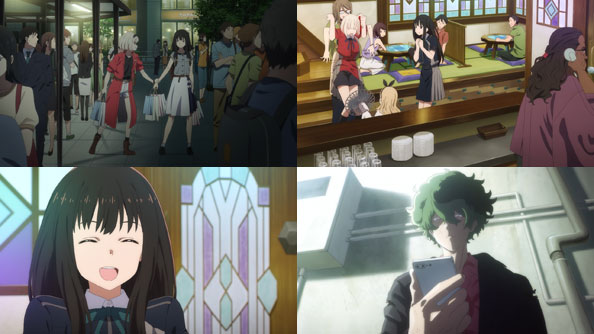 When Chisato and Takina walk past the taped-off station, Takina wants to check things out, but Chisato grabs her hand and tells her if she takes out her gun she’ll be arrested. They’re not Lycoris today, so whatever went on down in that station isn’t their concern. They also have a bunch of shopping bags, so they should just head home. The news reports a train collision and derailment, but makes clear that no one was hurt or injured.

That’s because as far as the public is concerned, the Lycoris are no one. The deeds those young girls performed defending the citizenry from agents of destruction will never be heralded; they may not even receive funerals. They had no family except each other, and now they’re all dead and the incident that killed them swept under yet another rug.

That’s why it’s so important to Chisato that Takina learn to loosen up and live a little, whether it’s wearing cuter clothes or less tactical underwear, spending too much money on too many calories or carbs, or being goofballs beside the fish tanks. Because people out there like the green-haired guy (Majima) and Robota (who makes contact with him and proposes a partnership) want to destroy the Lycoris and what they represent.

Chisato and Takina could be killed in the line of duty any day, at any moment, and their deeds and sacrifice forgotten. So it behooves them to look up at the blue sky, feel the wind in their hair, and laugh when they can.