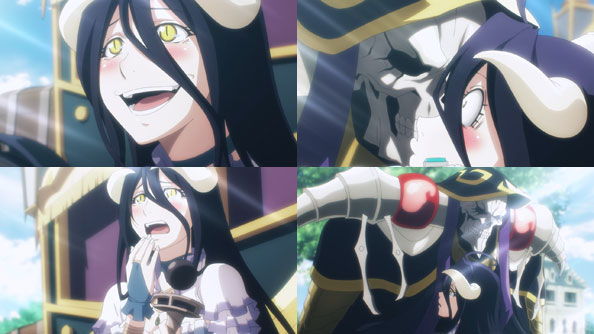 I’m glad the show rewound a bit to show us Albedo setting off on her envoy mission, because it shows us how much Momonga cares about her, fussing over her until she asks him for a kiss to stave off illness. When he actually does kiss her—not on the lips but the cheek—she’s so shocked she bursts into tears of joy, such that he has to embrace her to clam her down.

Compare this tender, adorable scene to the obligatory Old Dudes (and one Old Dudette) Sitting Around A Table Talking About Stuff that follows. Frankly, I love the contrast. Ainz and Albedo may be old friends to us, and we even know Ainz is actually just a human from our world. But to these elemental Cardinals of the Slane Theocracy, he is the single greatest threat they have ever faced. They’re not sure they can defeat him, but they’re going to try.

The Cardinals also make all manner of references to “God-kin”, “Black Scripture”, and the “Thousand Leagues Astrologer”, the latter of whom we see cowering under her pillow. She knows what Emperor El-Nix already knows: he and his empire are on borrowed time, and that time belongs to Lord Ains. He allows himself a moment of vulnerability in front of his two most trusted men, voicing his panic and despair at the situation he’s facing; his hair literally falling out in clumps.

He arranges an ultra-secret meeting between himself and representatives of Slane in his imperial box at the coliseum. His guests are so suspicious they do not say anything of note to him, only hand him inquiries on paper which he is to respond to in writing.

But even though he is protect by the empire’s most powerful team of adventures (Silver Thread Bird), the meeting is undone by the “coincidence” that the main event is a bout between the empire’s long-reigning Warrior King…and Ainz Ooal Gown himself.

Ainz drops in on his “old pal” El-Nix, making the priests that much more suspicious that either the young emperor has fallen under the undead Sorcerer King’s thrall, or simply planned to sell him out. The tragic thing is, El-Nix is neither; he is terrified of Ainz, but he wants an alliance with Slane in the slight chance Ainz can be beaten. Hopes of such an alliance were dashed for now by Ainz…or Demiurge in disguise.