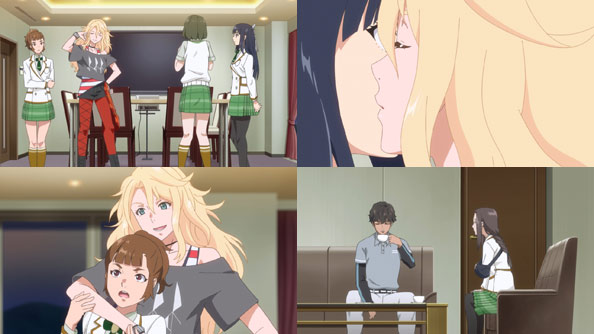 As Birdie Wing outings go, this last one was a bit tame; I’d almost go so far as to say leisurely. But I went in almost certain the entire All-Japan Girl’s Tournament wouldn’t get wrapped up in one episode; if it had, it would have surely sucked.

While expectations were lower, I still looked forward to lots of Eve and Aoi flirting, and in this I was not disappointed. Eve even starts things off frisky by giving Aoi a Nafrecian peck on the cheek and then claiming Ichina as her personal body pillow for the night, while Coach Reiya rightfully shoots Kinue down.

It’s a good thing Ichina shared a room with Eve too, as neither Eve nor Aoi would have slept a wink and not been ready for the golf. That said, due to their high qualifying rank they get a fairly late tee time, giving them time to good off more.

As Kuyou and Kaoruko do battle against another pair, their coach Date gets trash-talked by Reiya, who is confident his two first years will win decisively, seeing as how Aoi is golf royalty and Eve is the apprentice of the legendary Leo Millafoden.

This wouldn’t be much fun if Eve and Aoi didn’t run into a little adversity, as Eve’s worst enemy turns out not to be Himekawa Mizuho, but her own over-aggressiveness. She puts a ball into the bunker, and Aoi, perhaps a little too wound up about getting to play beside Eve, misses getting the ball out. That said, the two win their first round comfortably.

The thing is, Eve wanted to defeat their opponents to a pulp—kill them, with golf—as funny a collection of four words as I’ve heard spoken in an anime (I particularly love that comma in there). Their win, while easy, is also much closer than either of their elite rival pairs from Kouran and Nada.

We also learn that while Aoi is the daughter of Hodaka Kazuhiko, Himeko seems to have inherited his brand of golf, so much so that Aoi recognizes it instantly. Himeko and Kaede destroy their opponents in their two rounds, an impressive response to Eve and Aoi’s superior score in the qualifiers.

Eve’s usual mind games won’t work on the Kouran or Nada girls, but Ichina feels it’s actually good for her to be experimenting with her aggressiveness in earlier matches where it’s safe to do so. Eve and Aoi will have to take every risk they can to defeat Kaoruko and Himeko, to say nothing of killing them, in golf.

Naturally, this ends before those key duels take place, and a second season of Birdie Wing in Winter 2023 has restored my faith in both anime and humanity. As far as I’m concerned, the golf flirting and murder can go on indefinitely; a veritable Hole in One Piece.