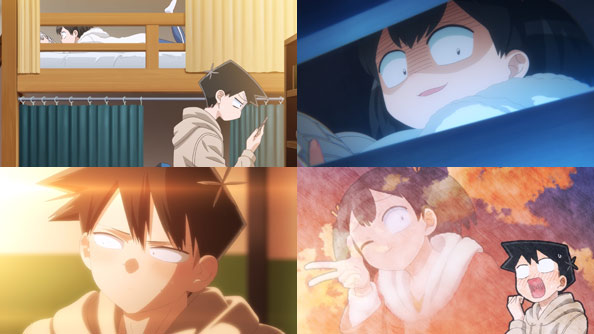 It’s already March and White Day is upon him, but Tadano doesn’t know what to get Komi. Candy means you like someone, cookies mean they’re just a friend, but to him Komi is kinda-sorta both. What to do? Well, under the unconvincing guise that he’s getting a gift for Katai, he enlists the help of his sister Hitomi, who is excited about her big bro “gettin’ some”, in the parlance of our times.

White Day is actually Saturday, but everyone takes care of their business on Friday…except Tadano, who instead invites Katai to dinner. That only makes his task more difficult as he must go to Komi’s house the next day and brave her parents.

But he does make it, and delivers a very sweet and thoughtful gift of hand cream, along with a single candy. Just like she gave him the very best of the “friendship” chocolate she made, the single candy is an acknowledgement of something more than just friends, and it’s not lost on Komi.

Komi seems a little out of it to Tadano one day, but before he can ask her what’s up, Najimi goes and starts the eraser war to end all eraser wars. Much like the snowball fight with the kids, this takes an extremely mundane classroom activity to a ridiculous level of intensity that involves the entire class and ends with Komi claiming an easy, stylish victory.

Then the class clears out, leaving just Komi and Tadano together in the classroom as the rains fall outside. Komi, increasingly unafraid of speaking out loud to Tadano, tells him she feels lonely since the closing ceremony is upon them and they’ll be in a new class soon.

Tadano uses the rain as a metaphor to ensure her that things will be alright, and that they shouldn’t lament the end of one year, but celebrate how amazingly full and fun that year was, in which she made one friend, then two, then three, then, I dunno, something approaching twenty.

The first day of the new school year, there’s every indication Komi and Tadano ended up in the same class together again, and when he says good morning, she puts the notebook away and tells him she’s looking forward to another year with him. It’s Peak Sweet Komi, and a perfect way to close the curtain on the second—and most likely not final—season.